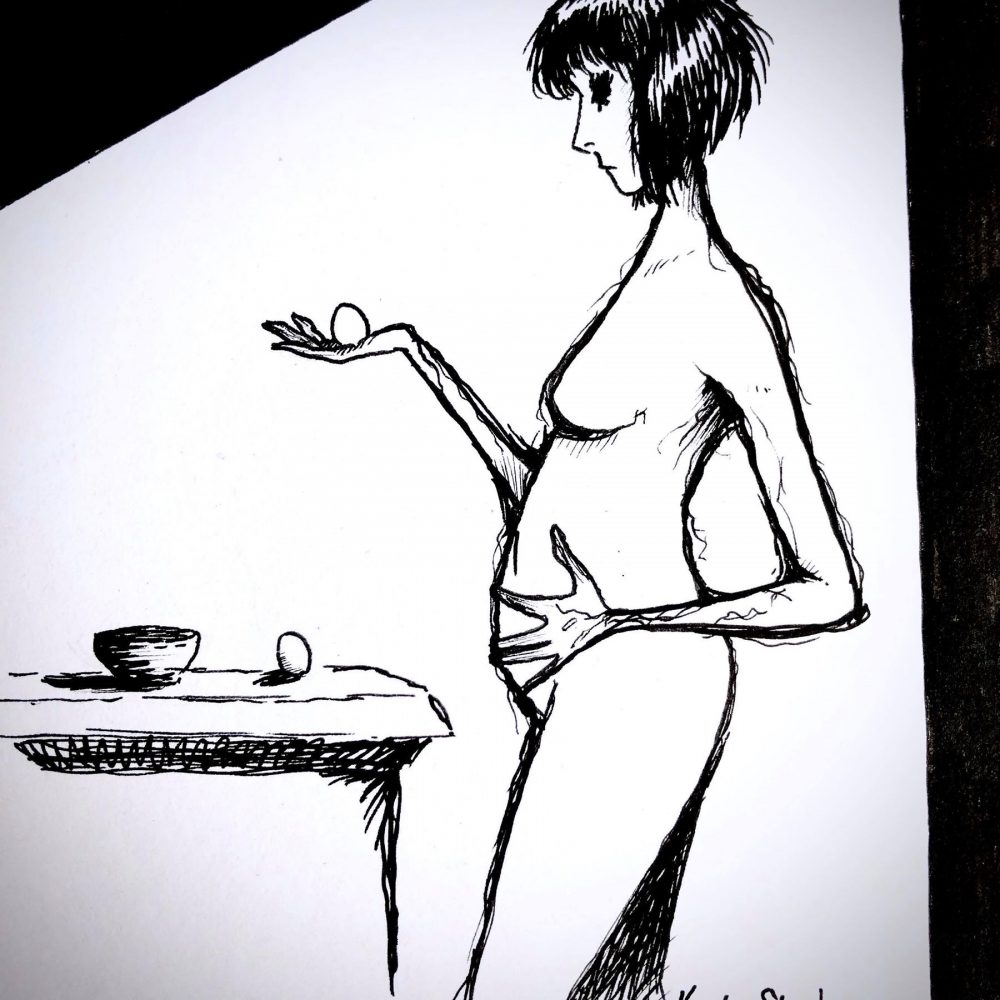 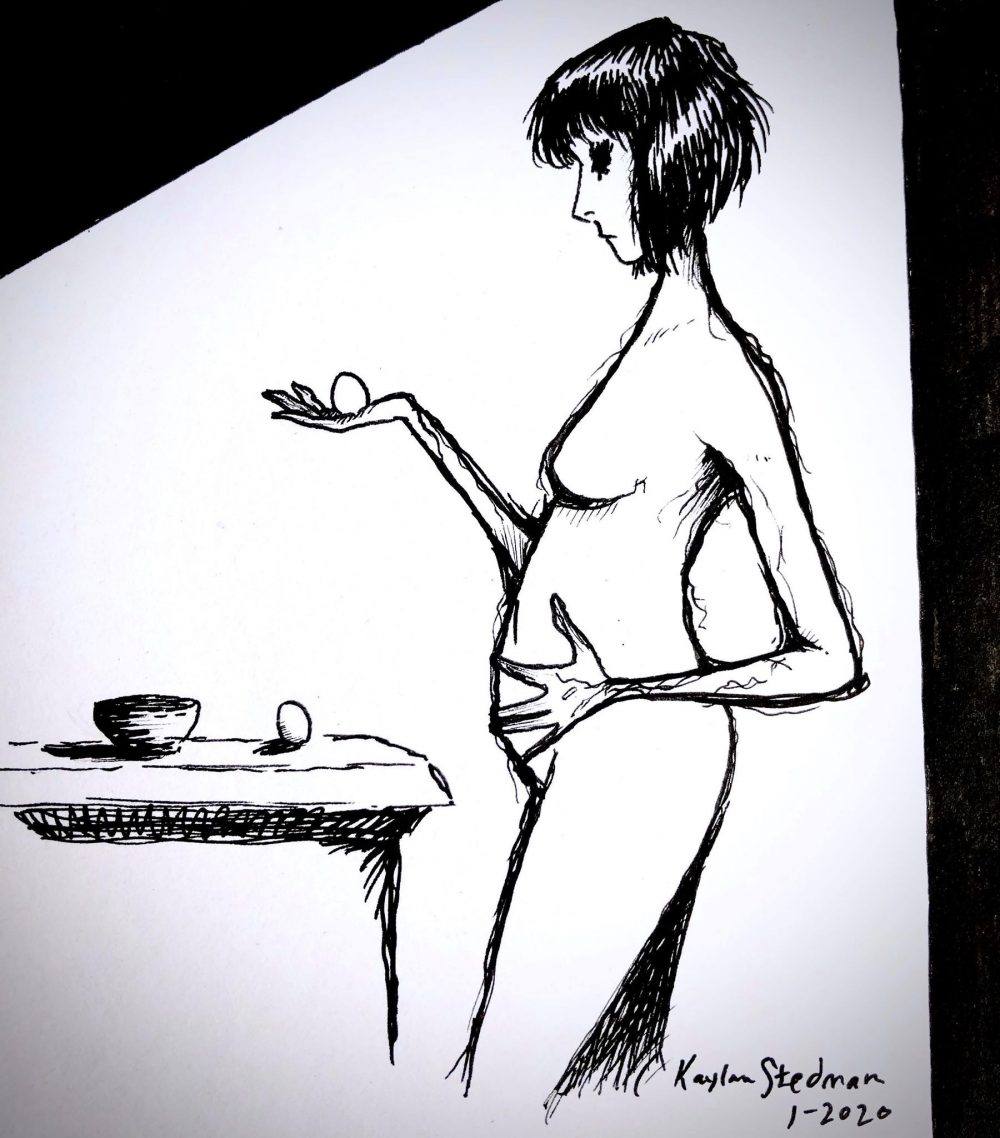 Make sure the embryo doesn’t think of pecking through its shell which you plan to crush into powder and mix in a smoothie to stave off osteoporosis. If it starts to dream of breaking through its encasement, it won’t be long before blood vessels form in the yolk and eyelids cover the eyeball. Make sure you don’t see the formation of knee caps or pronouncement of a beak and egg tooth. Make sure the child isn’t a child. More importantly, make sure you don’t see a child or think of a child.

Crack three eggs into a bowl. Marvel at how easily the shell crumbles under the pressure of your fingers. Three brittle shells to protect chicks who, in an alternate universe, anticipate a future of overpriced daycare and corn feed. The organic, free-range eggs have harder shells–ones that you could probably use in a water balloon toss and not worry about reducing the momentum enough, about catching it wrong, about saving it wrong. To break these kinds of eggs open, crush them against the side of the bowl. Then let the chick leak out in clumps.

Take a fork or pair of chopsticks and stir the whites and yolks together. Stir until you see a uniform yellow, a viscous liquid you could drink and not think of the feathers plucked from farm chickens to form Icarus’s wings, the feathers that drowned in glue before they drowned in the sea, the feathers that could emerge from a yolk like an angel spreading its wings. The angel squawks and trills and peeps and cackles. There are feathers at the bottom of the sea, and here are the feathers you’ve already whisked away into a porcelain bowl patterned with blue cats waving hello, come here, I’m a little hungry.

Pour in one cup of purified water. Continue to beat.

Add a dash of salt. Continue to beat.

Note the stains on the kitchen counter from spilled chili oil. Cleaning is a full-time job. Cleaning and stacking broken eggshells that you’ll later boil, dehydrate, and crush using a mortar and pestle. Bone is composed mostly of collagen and hydroxyapatite, shells mainly of calcium carbonate, and yet. And yet. Question why you cannot even return an eggshell to the earth as compost so your tomatoes can grow without blossom end rot, so your plants may never know the fear of running out of building material. Question why the chick that you swear isn’t a chick does not even get a token bone for its grave. Cough down a blend of eggshell powder, spinach, and banana. Curse your body who steals calcium from your teeth and bones to engineer a tiny human organism of its own.

Steam for seven minutes. The egg will solidify into a custard-like consistency. Then drizzle a teaspoon or two of soy sauce and sesame oil until the egg is overpowered by the oil’s nutty aroma–it no longer looks like egg, smells like egg.

Scoop out a spoonful of steamed egg and taste.

Hold your hair back with one hand and support your body above the toilet with another as your stomach muscles manage to find water and a partially dissolved prenatal supplement you had for breakfast. Wait for your stomach muscles to push it back up your digestive tract. This is not a demonstration of eating for two, but a demonstration of eating for one and an experiment, a cellular mass that you contemplated beating out of your womb and into a bowl that you’d pour over the earth as a gesture to close one circle of life. Focus. Try again. Let your intestine absorb what’s left of the egg–lipids, amino acids, vitamins, iron (for your anemia), don’t lose it to the sewage system.

Maybe garnish with scallion. The green makes it nicer on the eyes, although steamed egg still tastes like egg. Serve warm.

Lucy Zhang is a writer masquerading around as a software engineer. She watches anime and sleeps in on weekends like a normal human being. Recent publications include: (mac)ro(mic), Selcouth Station, The Disappointed Housewife, Fictional Café, Kissing Dynamite Poetry, Ghost City Review, and Scoundrel Time. She can be found at https://kowaretasekai.wordpress.com/ or on Twitter @Dango_Ramen.