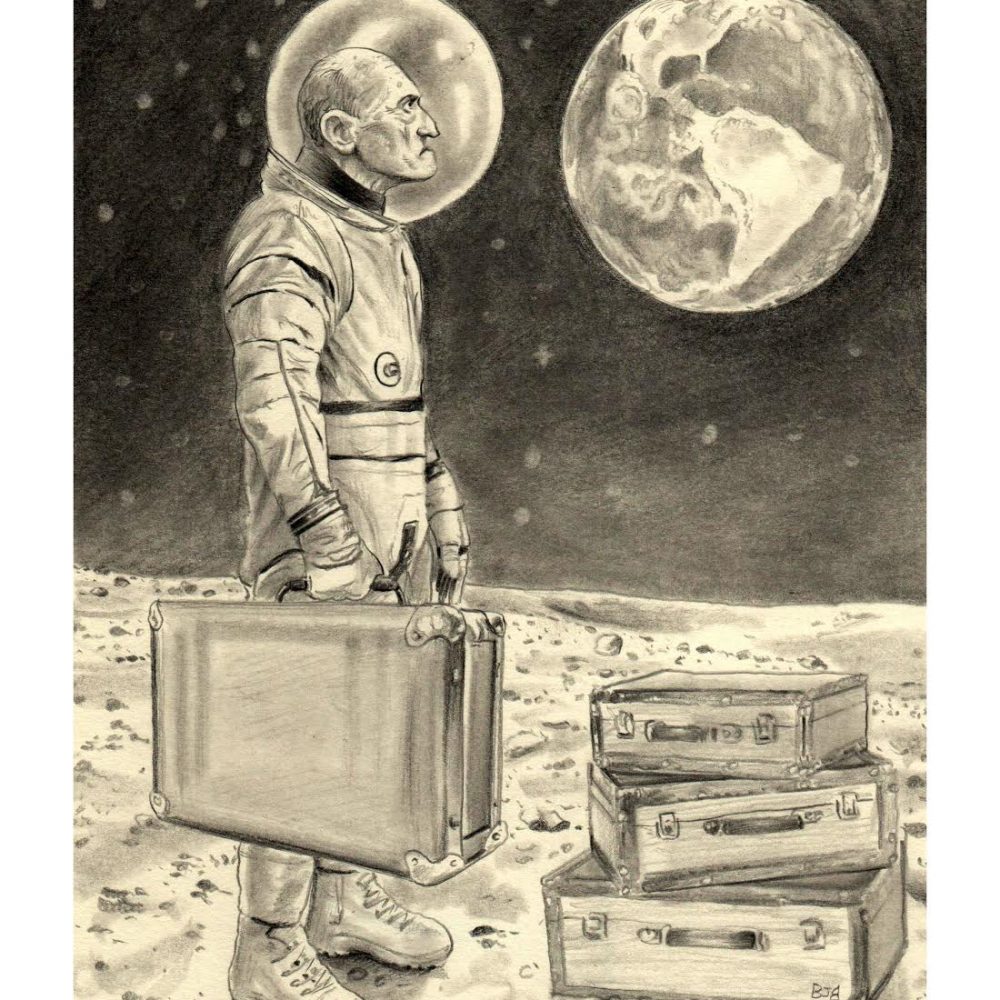 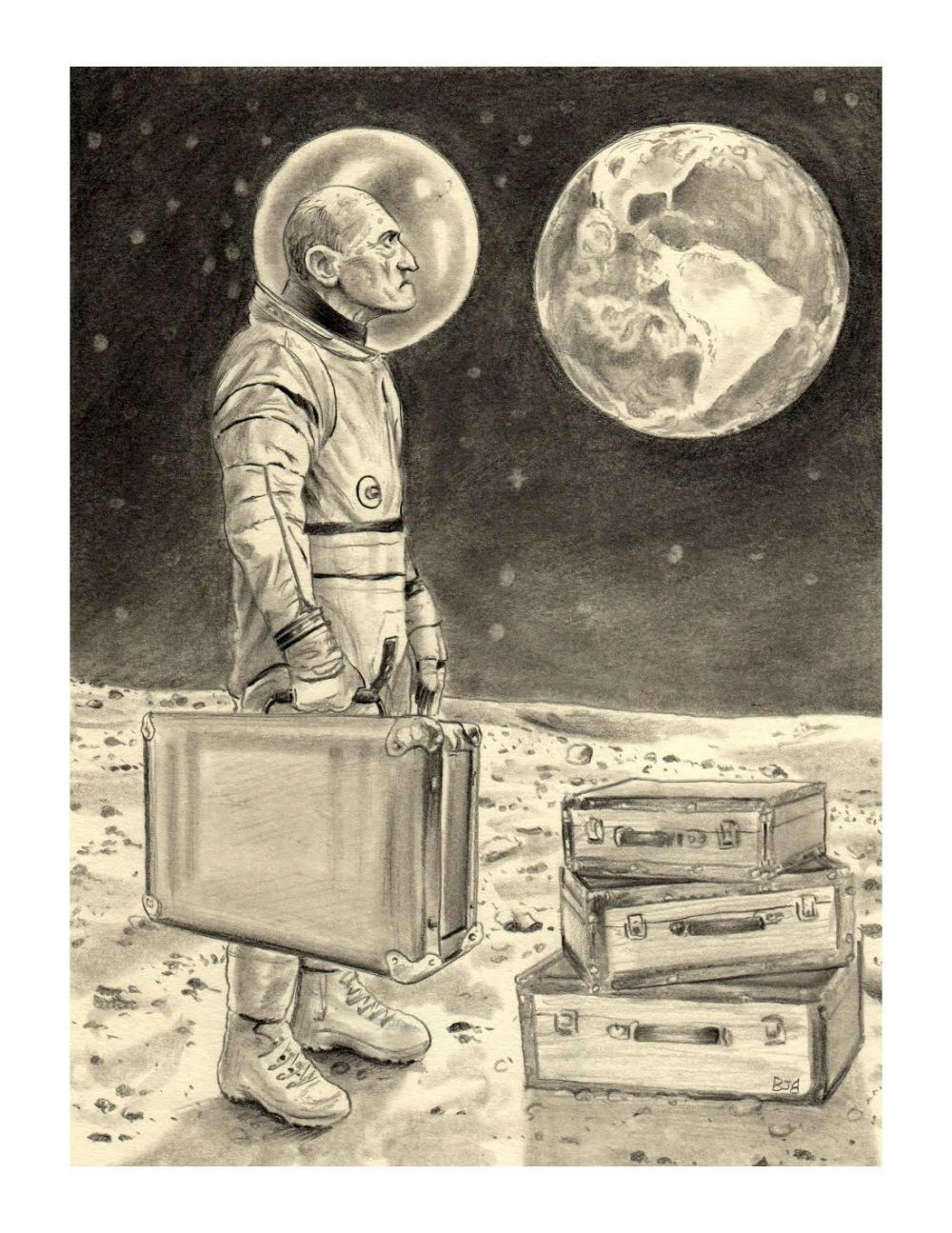 The prisons went to the moon first.

The idea made sense – at least, it made sense to the lawmakers. What place is more secure for the Earth’s worst criminals, they argued, than a place not on Earth? Sure, it was mostly paid for by tax dollars, but at least we’re still ahead of the Russians, people said. And that’s always the place you want to be. The greatest country on earth, and now, the greatest country on the moon.

Plus, it let us close Guantanamo for good, which made the liberals pretty happy. I mean, I’m pretty sure a lunar-based prison is a worse alternative, but at least no one was being tortured up there. From the stories we heard, it didn’t sound half bad. These criminals, the worst of our humanity, were now working for science, collecting rock samples and charting stars and orbital cycles. It turns out, without any other people to rob or rape or terrorize, you could get a lot of work done.

After the prisons were set up, retirement homes went next. It made for some great marketing campaigns. TV commercials, full of slogans like, “live your golden years watching the stars rise with the sun” or “liftoff to life’s final adventure.” Never mind the cost of the trip was an entire life’s savings, but I mean, why did life savings matter to someone moving permanently to the moon?

The overall problem was that there was no return trip. Not yet. Hence the life-sentence prisons and retirement homes. No need for the return trip. In this early phase of the program, there wasn’t yet a large enough moon base that could allow vessels to travel freely. Only small cargo ships could afford the back and forth. It wasn’t a vacation destination. It was a place to send the unwanted, the forgotten.

Anyway, after the prisons and the retirement homes, the next group to go up were the terminally ill, those no longer responding to treatments. I think it was around that time the moon trip finally got the nickname “The Death Trip.” I mean, that’s what it was. You were meant to live and die completely off the planet. It was assisted suicide.

But his supporters, they liked that the terminally ill were into the moon idea. Getting them off the planet meant avoiding a tricky “pulling the plug” scenario. Instead, you went out naturally. “How God intended you to die,” they argued. Some advertisers played up that religious aspect, calling it “one step closer to heaven” or “a pit stop before your final destination.”

Anything to make it sound more appealing that we’re slowly turning the moon into one big gravesite. So far, there have only been a few moon deaths, but eventually, it’ll be more dead bodies up there than live ones. Where will all of the moon bodies go? Left out on the surface to freeze? Float off into space? Our bodies returning to star dust?

And now, after the prisons and the retirement homes and the center for the terminally ill, the Death Trip is finally open to volunteers. Well, to anyone who can pay the millions for a permanent relocation to the moon.

When this new phase of the program was first announced, the Kickstarter campaigns were outrageous. Everyone seemed romanced by the idea of getting the hell off this planet.

Remember when all we wanted was to go to Canada?

As for me, I’m glad the program is now open to volunteers. It means being able to dedicate your life to science, and research, and the dream of terraforming the rock that surrounds our blue planet. I mean, from that vantage point, the world must look so peaceful. All blue swaths of oceans and swirling cloud patterns. From there, you can’t see the drone strikes or the suicide bombers or hear the news outlets screaming at each other. From there, we must look like one big happy family.

I also hear in the media of the euphoria of living on the moon. People go into these meditative states while gazing down at the planet, watching the sun’s shadow dictate time zones and sleeping patterns. To be separate from that, it almost makes it seem as if you are separate from time itself.

Anyway, that’s why I signed up. I’m still raising funds, but it looks like I have a good chance of going. It’s not that I have a death wish, it’s more like a “the grass is greener on the other side” complex. I’m a hopeless optimist. And here, hope is no longer a campaign slogan; it’s a foreign language.

Anyway, if I do make the cut, and raise the money, I’ll be part of a group that’s meant to establish more of a moon community. Aside from the scientists who work the landing dock and receive cargo shipments, this new program would send the first healthy, young, and humane group going to the moon to simply exist, with no promise of seeing Earth again.

I get asked a lot by my friends about why I want to go. My default answer is “I’m just looking forward to a good night’s sleep.” Always the funny guy.

But aren’t you nervous to leave Earth forever? they ask. Not nervous, I say, just curious. Sure, the unknown seems scary, but instead, think of what I’m gaining. The ability to start over. How many people every day wish they could start over in a new place and be someone else? Maybe it will be lonely, or maybe it’ll be peaceful. Maybe I’ll find nirvana. Maybe to actually find nirvana you have to leave this planet. Maybe now I’ll live out the rest of my life loving the earth that gave me life, instead of hating the land that’s raised me and the people on it.

How can anything so beautiful be considered a death trip?