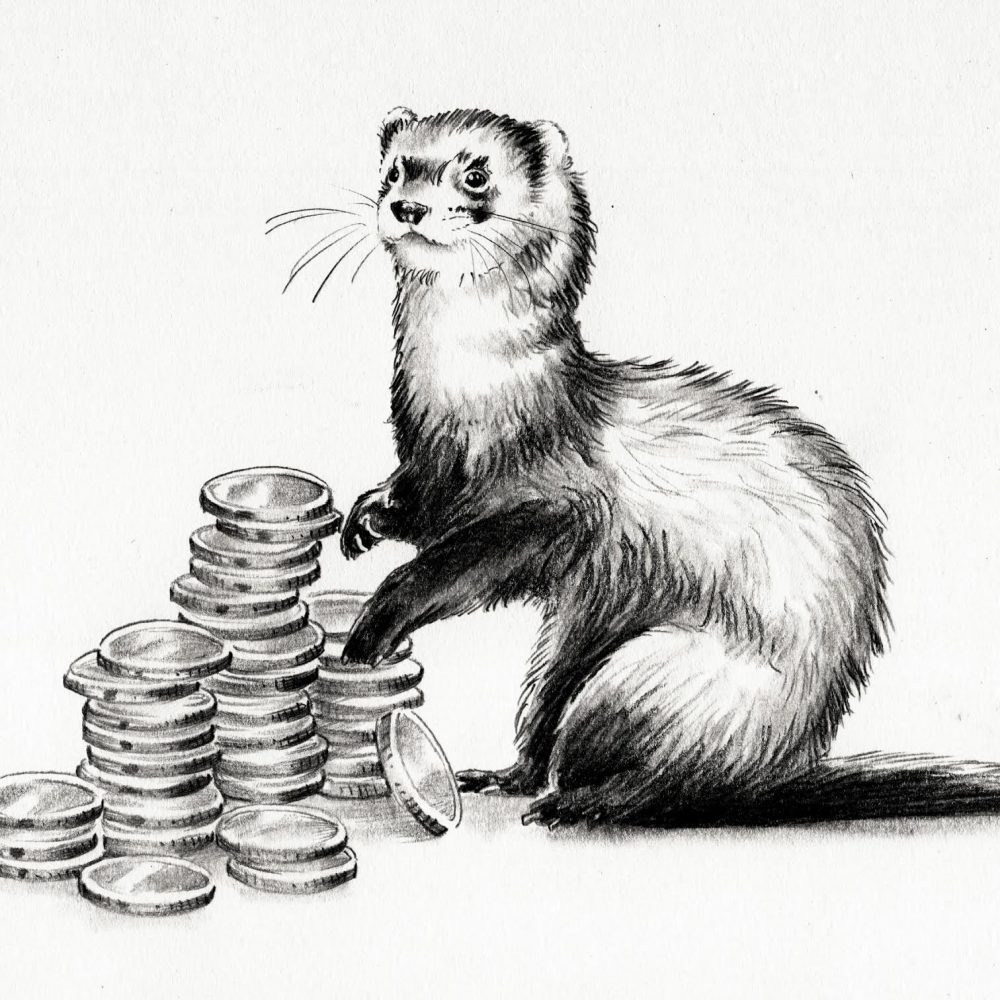 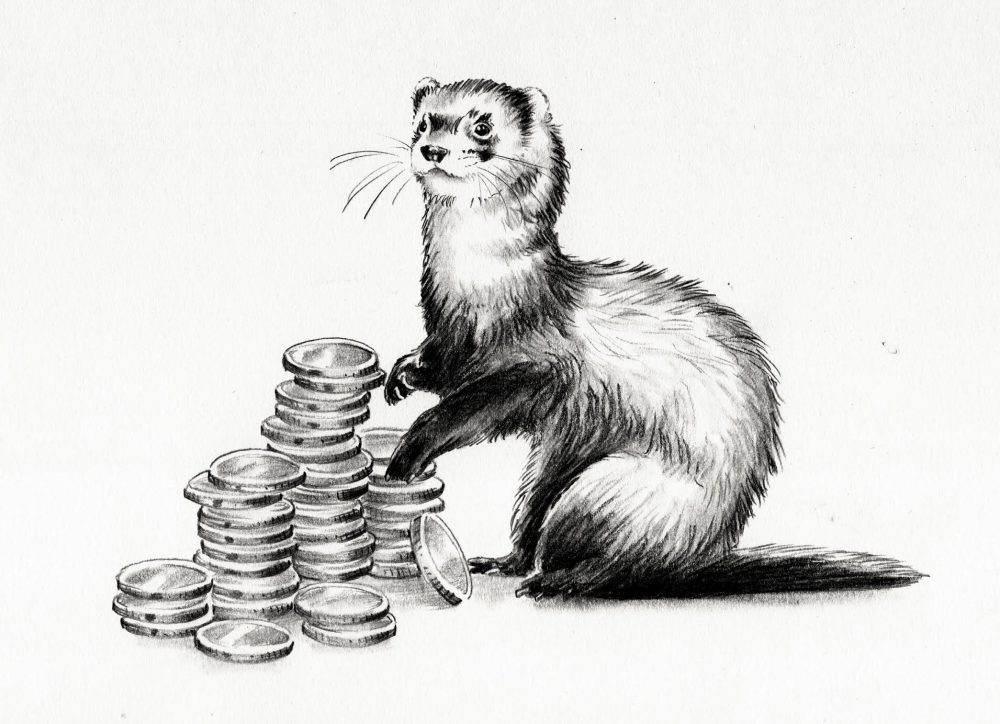 On the late night news, halfway through my paper stack, a man and woman discuss how their house-crushing tornado experience opened twenty new doors, made them successful shop owners instead of an ageing couple going broke. Lucky you, I think, tying my hair back before inspecting another page of data, wondering if tonight’s unpaid overtime will end by one a.m., or if a hiccup sits in the stack like a hardened pea somewhere, shifting bedtime to two.

The doorbell rings. I open up to a ferret with golden eyes on my condo’s front porch. It carries a pouch about its neck that jingles like a change purse. I close the door, not sure why I answered in the first place, a door I expect to click, only it softly thumps against the ferret’s body instead.

“I’ll be staying with you,” he says, scampering in.

I want to protest: Files call me from the back room. Bills eye me from the kitchen. Better to tick off tasks than fill anew; shuffle out than welcome in.

The ferret hangs his pouch on a keyhook nailed to the wall.

The ferret stays for a day, a week, a month. During this time drawers gather fur, blankets turn to shreds, shoes sail through the air, pots settle in their scum. I become fond of the mustelid, how he approaches the condo as if it were an archeological dig without any rules of preservation. If I tidy, the ferret gently presses his teeth into the back of my hand; the sting reminds me of old jobs, prospects, friends.

One night in the living room, the ferret burrows through the cork floor, saying between bites, “I have unusually strong teeth” or “I favor to help” or “My favorite liquid is mud,” dropping chunks in my lap like gifts. I glance at the front door, picturing the landlord crossing into the room, it’s about time for his visit, I’ve gone two months not paying rent, although I promised him double for the wait.

At dawn the ferret stares at me from the nightstand. I scratch behind his ears.

The ferret chews through five hours’ work while I’m gone, presentation boards and brochure stacks, and for the first time I tell him, “Enough.” The ferret shakes as if shaking off water, then bites my knee and we dive into a tussle, nips and scratches tallying up. Mostly the ferret loops through my arms and slips around my legs as I make to strangle him, knowing I never will.

“I favor to help,” the ferret says, tying himself in a knot about my neck and eyeing me head on. His golden eyes go silver as his knot tightens enough to cause me a small spasm. I nod, wondering whether my next job lies in small pet care. That’s when the bell rings. It’s the landlord. He looks around at the debris and then at the ferret around my neck before slapping a sticky eviction notice on my back like a kick-me sign.

After the landlord leaves, the ferret disappears into the hall closet, scraping at the linoleum. He emerges several hours later dragging a huge bag tied to his tail’s end toward the front door. The bag clinks and scrapes. Before I ask him what’s in the bag, he answers, “Gold.” I know he’s waiting for me to open the door, and I do, letting him cross the threshold, letting him take the gold with him: Once the ferret said, “What’s mine is mine.” Now he looks back and flicks a coin my way. Then another, and another. Then several more. “Enough,” he says, turning and heading into the setting sun.

I leave the front door open. Fill my luggage with clothes, toiletries, ointment.

Kristina Mottla's stories and poems have appeared in Barnstorm, Jersey Devil Press, Hartskill Review, Poetry Quarterly, Potomac Review, and elsewhere. She has a BA and an MFA. Find her on Twitter: @kristina_mottla.