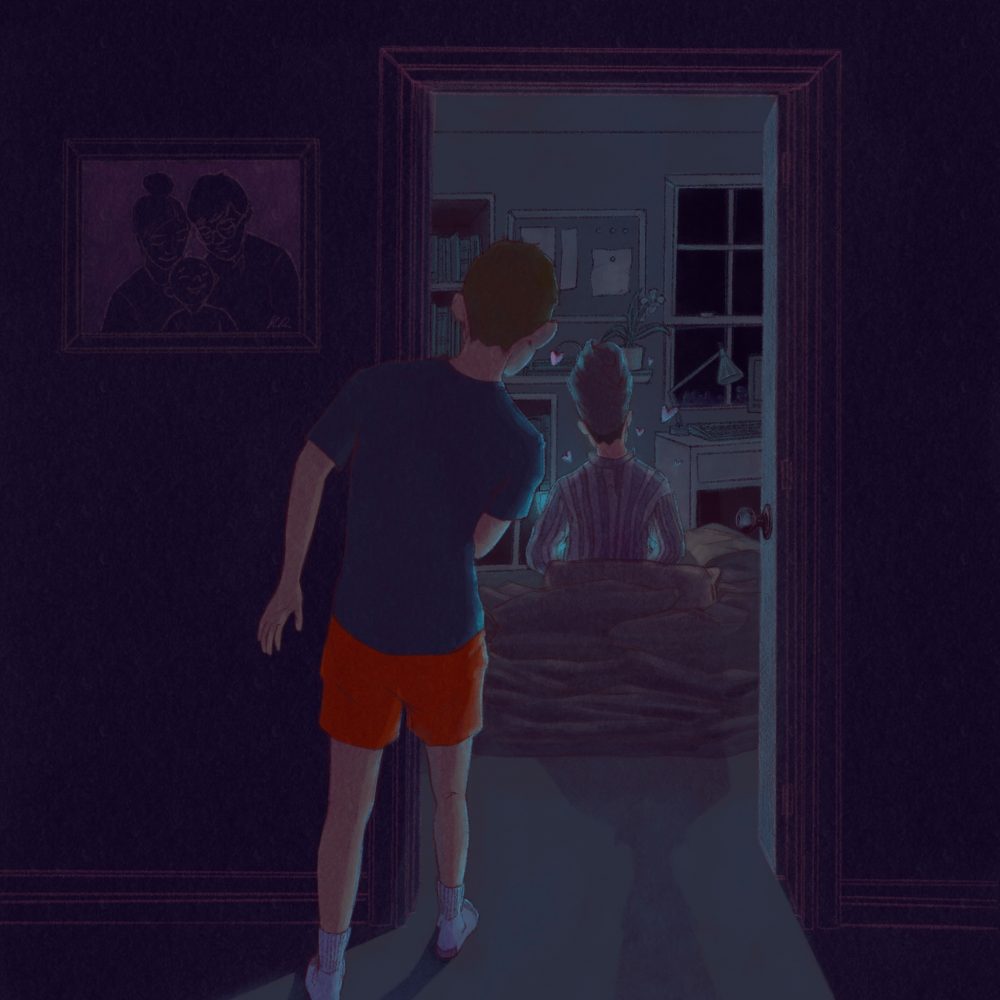 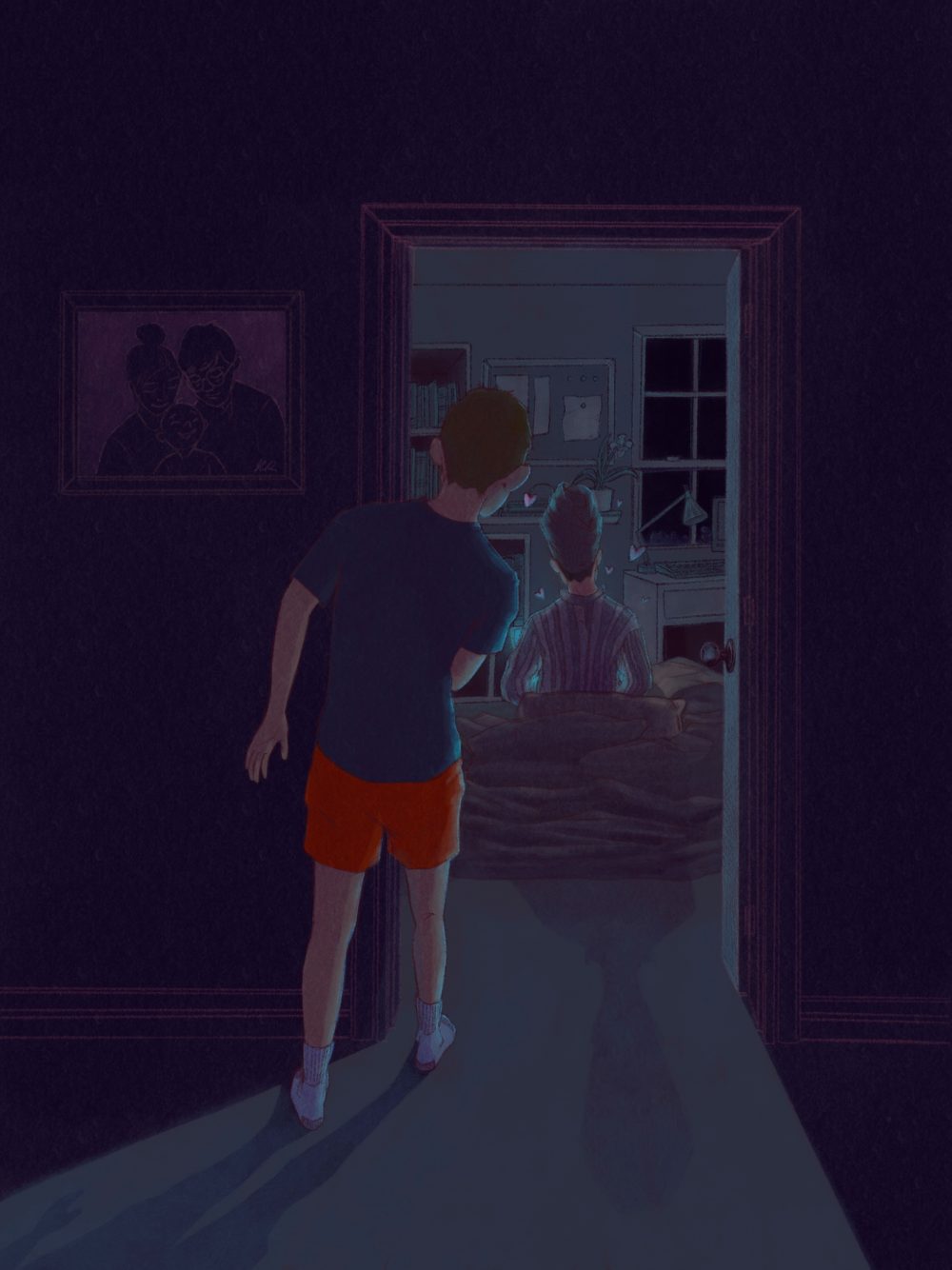 Mom meets the half-elf ranger, Stillgar, inside Everquest, the online roleplaying game. A makeshift bed of goose down comforters and three cream-colored pillows lay tidy on the computer room floor, because that’s where she sleeps now. Blue computer light bathes her body. She wears her favorite nightgown, a white smear of Nair burns her upper lip, and a towel wraps her long, wet, black and silver-streaked hair, high and tight, like the royal cap-crown of the Egyptian Queen, Nefertiti. Her fingers shudder each time Stillgar private messages:

GG on that Crushbone Orc

It’s not as beautiful as you, though.

Her husband sleeps, alone, in the master bedroom. The orcish death-rattles pumping through the speakers could wake him. And, so what if they did? If he were to walk in now, would he even understand her needs? Her desires to feel appreciated? Much less what is happening in front of him? That this is more than just some game for her?

The real-time clock reads 1:03 AM and he works in six hours. The same distance between where Mom sits in Florida and where he, Frederick, the man behind Stillgar, must sit in Denmark. If she typed goodbye and slept now, would she have the energy to meet and hunt with him, again? What are you having for breakfast? Mom types, and she laughs when he writes a danish because, of course he is.

Her son logs in as his human monk. At the other computer, Mom sits, still, playing her high-elf mage. She hasn’t changed out of her nightgown and, in the monitor’s reflection, her queenly demeanor feels less refined, instead pinker and puffier. There’s a smell on her, something like garlic, onions, or cheese left alone too long.

Her son punches goblins in the face, for an hour, and, in that time, she thinks how Stillgar—who she knows is Frederick, but still, why not keep calling him Stillgar?—proposed to her. How he offered her a Ruby Dragon’s Heart Wedding Ring which promised a +7 save to her fire, disease, cold, magic and poison resistances as long as she wore it. How she accepted his proposal. Her own wedding rings, the real ones, made of white gold and diamond, clack against the keyboard. What had they ever protected her from? The real-time clock reads 5:30 PM. Her husband would arrive home, soon.

Her teeth clench. Any more pressure and they might fracture. Her fingers command the keys to cast an attack spell and the goblin her son punches explodes in a storm of colorful fireworks.

Mom instructs her high-elf mage to meditate. When she stands her body feels like a tree in Florida during a torrential rain, ready to bend. If she tells her son about her weird video game lover, what then? Would he ‘get it’? He is a teenager, after all, and don’t teenagers feel the need to be loved, to feel angst, and loneliness? Isn’t that their thing?

What if he didn’t? Would his rejection bow her so far, she breaks?  Would he try to kill her lover in player versus player? Would he tell his dad her secret? Would he quit the game? Would they take the game away from her?

“You know he has other women when he leaves on his business trips,” she says. Finally.

Her son looks down, first at his keyboard, then the ground, then her. His face is riddled with pimples, his hair as greasy as hers, and she can’t help but think they must smell very much alike. But things don’t have to be like this, do they?

“I know,” he says. “I just didn’t know if you knew, too, but I guess I should’ve known better with you sleeping in here.” His hands tap at his knees like he’s typing a message for help or to find some way to logout of this situation.

And, it was a situation, wasn’t it? She had come this far.

“I’ve met someone,” she says. “In the game. He’s asked me to marry him, and I’m not entirely sure what that means, but this is something for me. I thought you should be a part of it. Or, at the very least, know.”

Her son stands. Will he leave and shut himself up in his room? Will he spit in my face and call me a whore? Will he end my world?

And, she waits, in her son’s arms, in the warm glow of computer light, to the sounds of  vengeful goblins tearing their unmanned characters to pieces, for her husband, for the questions he will ask about his crying wife, and whether she will, finally, now, tell him about the other man who saved her soul from the ghastly specters in the City of Mists; who camped for weeks to pluck a flower, just for her, from the coral gardens of the jealous undersea God; who lives six hours in the future; forty-eight hundred miles away, and yet, is with her always and forever; or, not.

Justin Brozanski is a writer based out of Orlando. He likes cats.