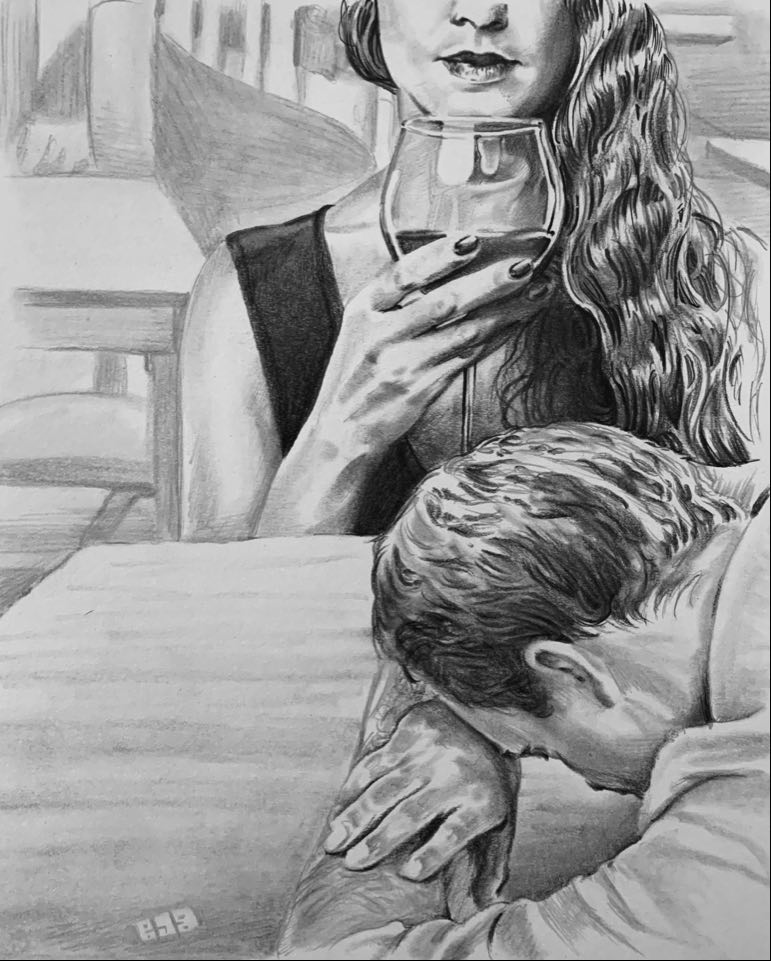 The coffee house is playing punk rock. Quietly. I think it’s the Misfits, that song about Marilyn Monroe. The quiet talk from the tables muffles the angst. It’s not enough to wake my date. He’s face down on the table. I pick at my tempeh Reuben. It tastes like grass. I’m a failed vegan. So is my date, apparently. We’d both said we were vegan in our dating profiles, and I ordered first because he’d said “girls first,” not even “ladies first” and I fell for it. Then he ordered stew.

I think it’s going fairly well, nothing too appalling about his family or his job or his past relationships. Then he interrupts my story about my ant farm to say, “I’ll be right back,” and he puts his head down on the striped tablecloth.

At first I am excited. I think like the famed clairvoyant Edgar Cayce he’s gone to the spirit world and he’ll come back from some out-of-body experience and tell me about a faraway place with mosquitos big as sparrows and snakes greener than the arugula in the salad I’m not eating.

He begins to snore. A soft snore, cute.

The waiter comes by and I ask for a glass of wine. “Red,” I whisper, “red as grizzly bear carnage.” Even though you are supposed to bus your own table here, he takes my plate but leaves the stew.

“Prayers,” I say, pointing my chin at my slumbering companion. The waiter nods understandingly, as if it’s a common occurrence for someone to push aside his stew and pray headfirst on the table.

My date and I – Phil, his name is Phil – had only been talking since last week. His profile doesn’t say he’s clairvoyant, I can just tell. Maybe he keeps it a secret until the second date or something. I put my face close to his. His nostrils flare as he sleeps, and I imagine I’m a flower, my petals quivering so near the fluttering of his nose hairs.

My stomach growls. The quiet coffeehouse punk rock growls back, decorously. Phil’s stew is getting cold. It’s a thin stew, more like soup. I extract the bowl and drink it like tea. Phil wakes up, looks around, confused.

“You slurped my stew,” Phil says. “This isn’t working out.”

He doesn’t ask me if I’d like dessert, which I would. He leaves the coffeehouse, and I follow, pulling my coat on as I walk, my short legs working double to keep up. He has his keys out, his car chirps a greeting from across the street. I’m not used to these shoes, I lose my balance, reaching for something to lean on. It’s a small push that sends him into the oncoming headlights.

He should have seen it coming. Edgar Cayce would have.