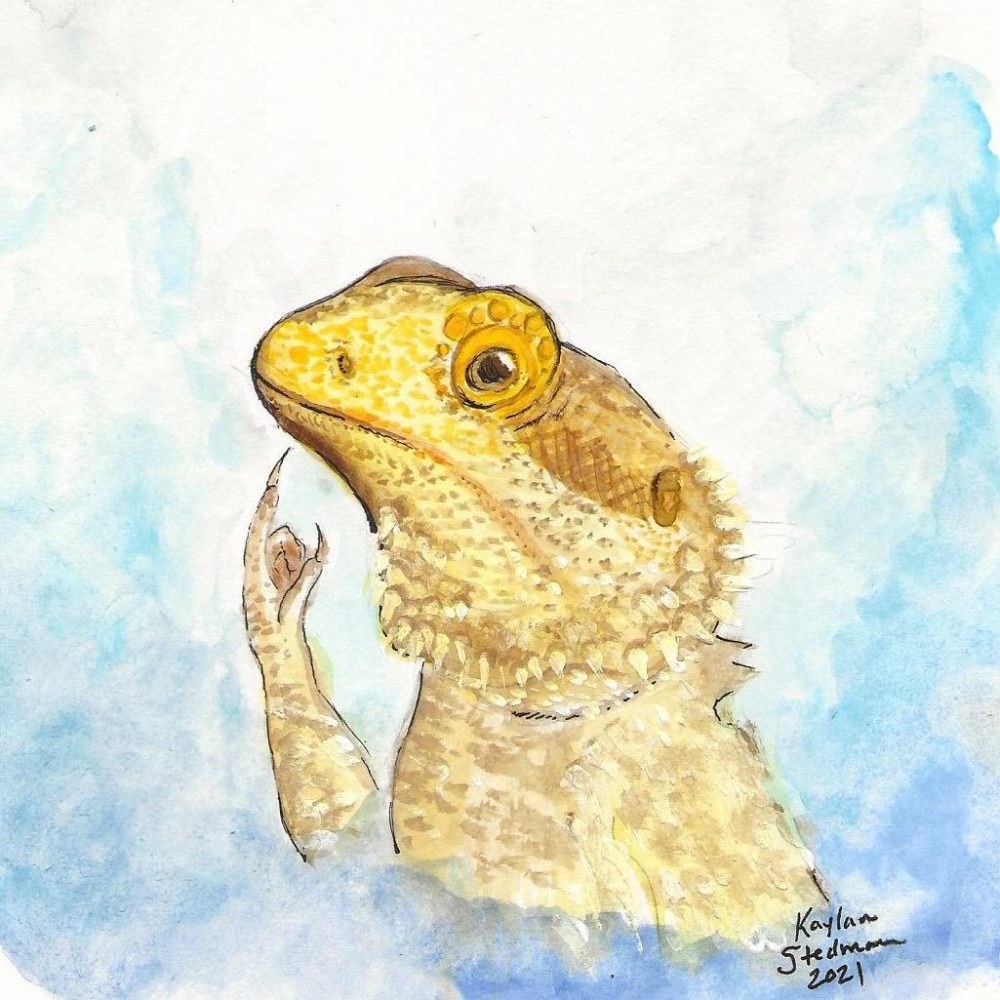 Alone and together in the Reptile Section

Sundays, the pet store is dark. We bask near each other through glass under UV light, but we don’t relax. We’re like a store full of blind dates.

You could say that it’s awkward to be here, alive, breathing so close to each other. Rejects. Males are known to kill each other in the same terrarium.

She is the one with the reptile tattoo on her neck, corkscrew curls. Feeds us defrosted crickets same time every day, every other day of the week. Sprinkles on vitamin powder, using her fingertips to stir.

She talks to the new girl Selina about her yoga class. “Taking yoga is stressing me out,” she says. “Downward dog my asshole. It’s making me worse.”

Some days she doesn’t talk at all, smokes outside. And later, she stands there watching the crickets dance before freezing them.

The young bearded dragons in my section are acting like teenagers. Cowboys, I say on Sundays, but clearly they’re weird about being here at all. Where do they want to live? Only the older, farty guys like me understand how lucky we are. Our Australian desert wallpaper, slapped-on plastic palms.

We have been given names by idiots

“When this place closes down, what will they do with all of these unhealthy reptiles?” I hear a older woman’s voice wafting over by the cat toys.

“They’re almost cute, but my God, that smell. And did you see their not-funny names? Donald Trump, Mike Pence. Bad taste.”

Mothers we can only taste

Our mothers are anyone’s guess, but I can sort of imagine mine’s eye colour. Dark and watery black. When I think “mother” an incubator goes on.

“Ouch,” my mother says when a male jumps on her, raping her, some free-wheeling daddy locking her into the sand. I think about one laying her eggs under a heat lamp, very old. I picture her rolling her buggy eyes right up, watching for birds. “I’m lunch,” she screams. This kind of mother I feel in my blood.

Mike Pence, the teenager on my left, is shitting a lot. I’m pretty sure he’s dying. His colour is yellower than usual. He looks like guano. I used to try to talk to him, but now, when I smell his illness, I want to touch him and let him know it’s okay.

Allie is an orphan

She opens my cage and she touches me head softly. “Donald the Conquerer,” she says. “I wish I could bring you home.”

Allie’s mother is dead, this is what the employee, Selina says. “Allie’s mother was killed by a car, right in her front yard, some drunk asshole just backing up right over her garden and ran her over,” she tells the boss.

Sex in the evening

The boss and Selina are naked, I can tell because I see the pink of their skin darting around the pet store, laughing like myna birds. I hear them breathing near the tropical fish, and I’m trying to breathe too, trying not roll my eyes, because it hurts when there is no bird shadow above me and my eyes get caught on nothing. When I roll my eyes I try to imagine a hawk though I’ve never seen one.

I hear them whimpering, and I feel like the other males in my corner are all throwing up.

The boss says the only thing that sells in this store are the cat and dog toys. “It doesn’t pick up soon, we’re toast,” he says to Selina. She makes a weird, fishy sound, like she’s popping bubbles into his mouth.

The surly young Cowboy makes eyes toward me. Too bad we’re not furry. Too bad we don’t play.

But I do try to laugh, because it’s funny, the idea of us free! I imagine Australia like the wallpaper—grainy oranges and vermilions, seams and waterspots. Cowboys like these sad- sacks here basking in the sand. Males who don’t fear each other, marching along the ridges, snorting at high-flying birds! Our beards fluffed out and ready, expanding like nets.

When having this dream I can smell a female beardie. I imagine the roughness of a warm, curly tongue and I’m almost home.