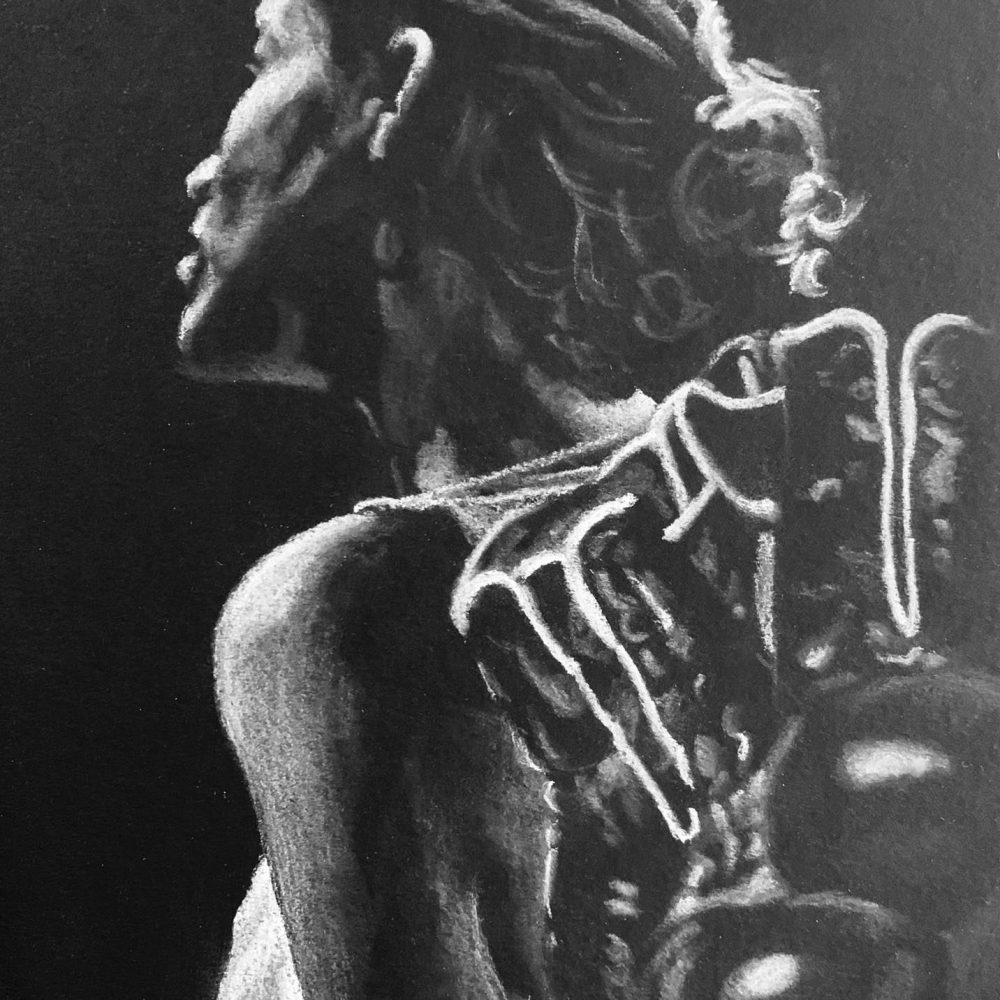 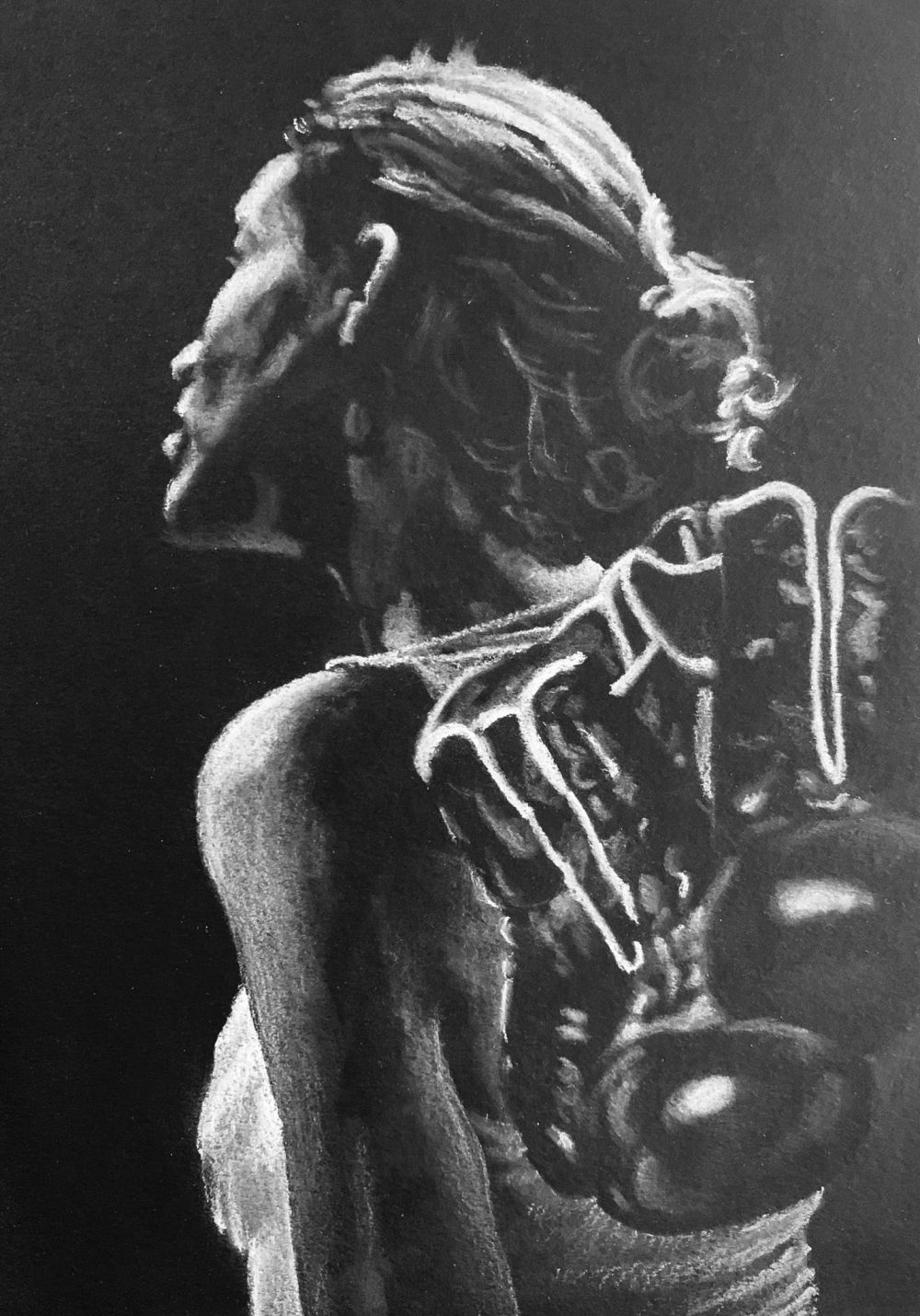 Shadows hue his face blue as a hospital gown. He wears a denim vest, jeans torn with holes. A splotch of dried blood darkens the sidewalk. He leads me past overgrown weeds to rusted railroad tracks.  Graffitied doors, broken bottles and smashed windows. An abandoned train station.

He brings home girls like me, girls who have tried to find the bottom of the world, girls with concave bodies and bruises on their arms, feverish eyes. He takes us in like we are stray kittens that can be tamed by a warm bowl of milk. At night, we look up at the stars and wonder what brought him to us, how he could give so much of this, all of it to us for free. Nights of feeling lucky until the world splits open, our skin a crooked seam.

Because he asks, we let men carve words on our bodies. We give him all the treasure he wants: our bodies, our souls, crisp bills folded, tucked into the cups of our bras. He makes promises, but everything he touches does not turn to gold. Money disappears like water snaking down a drain. After the men take us, we stagger slick with blood, lambs torn and gutted open. We take turns nestling against each other, searching for warmth.

Girls make phone calls or hitchhike, but they never get far. Afterward, there is nothing to say they ever existed—not even an expired tube of lip-gloss or a mismatched sock. We are girls with marbles for eyes, topaz, amethyst.

Soon there are only two of us left: me and a tiny elf girl. Her lips are wrong, like silly putty smashed and mushed back together again. Her nails, are always bleeding, bitten down to the quick.

I don’t like Philomela because she’s not right in the head. She says the one time Daddy took her to a run-down house, there was a dog on a treadmill that broke from its chain, snapping. It had electric green wings like the flashing lights on a billboard sign. She said when it’s nighttime her wings are white, but during the daytime they’re the color of a rainbow lollipop, swirly and bright.

I tell her about all the fights I used to have at school, how the boys and girls would bet.

Philomela says, “How many did you win?

“Too many to count. Six, seven, ten, thirteen.”

At night, she braids my hair. Seven braids to represent seven girls who have disappeared.

Philomela says with a bloodthirsty look in her eye, “Fight him. You’ll win.”

One day, sick with the flu, I lie on torn vinyl seats and wrap myself in a blanket. Now that I do not carry any money, he does not call me baby. He says the city is full of the dead and the dying; one more nameless girl won’t be a loss.

I do not tell him that I am glad he doesn’t know my name. Once, I called him Daddy but no longer. I have decided that tonight I will escape. I make a deal with him. If I win, he’ll let us go.

The wraps he gives me are stiff, salty with dried sweat, but the boxing gloves are worn, supple as new skin. Hands in the air, I strut into the arena. When I trained, there was the thwack of leather gloves against the swinging of the bag. With matches, there were cheers and boos: music in my head. Here, there is only silence.

Philomela sits on the ground, watches with anxious eyes.

I bounce on the balls of my feet, pretend I hear the screech of a whistle. My fist is still as a snake by my head, but I am crouched and ready to strike.

He faces me, throws a jab.

One uppercut to his ribs and one to the jaw, but he gets me back, a cross to the shoulder. His fist shoots straight for my face. My body drags heavy. My legs tremble. What is a three-minute round to him? To me it is days, weeks. He is fresh and new; he has not been selling his body to men day after day. My nose is swollen; it is hard to breathe. I fall.

Philomela is too tiny to help me up. She pets one of my braids instead.

I’ve won fights before. I tell myself the only power he has is the one we gave him. Once, I loved him. But he no longer has that hold over me. My mouth is sour with blood. I spit.

He is hardly winded; he is laughing. He is confident, he thinks he will win.

He left his switchblade on the floor. I pick it up, saw through my hair, through all the braids. I am a girl who has forged herself sharp, a knife blade. Sweat slicked floor, the staccato rhythm of a one-two punch.

I saunter back into the arena. I step forward. This is the last round. Now that I no longer have the braids weighing me down, I am feather light. The girls who disappeared will not be forgotten. I recite their names in my head: Emily, Brianna, Jessa and Laura, Mallory, Karin and Wilhelmina. This is what keeps me going; this is what tells me I will win.

My hook slices through him, teeth against skin. I take my chain of braids and knot them together, a noose against his throat. We leave and don’t look back.

I don’t tell Philomela that our future is throbbing blue lights and blaring sirens. Instead, I tell her a train is coming. I can hear the purr of the engine, see the metal sweep of its wings. I tell her when the train arrives, it’ll feel like climbing inside the ribcage of a dragon. We’ll feel its breaths expanding and contracting; we’ll fall asleep listening to the one-two beat of its wings.

Candace Hartsuyker is a third-year fiction student at McNeese State University and reads for PANK. She has been published in BULL: Men’s Fiction, Foliate Oak and elsewhere.