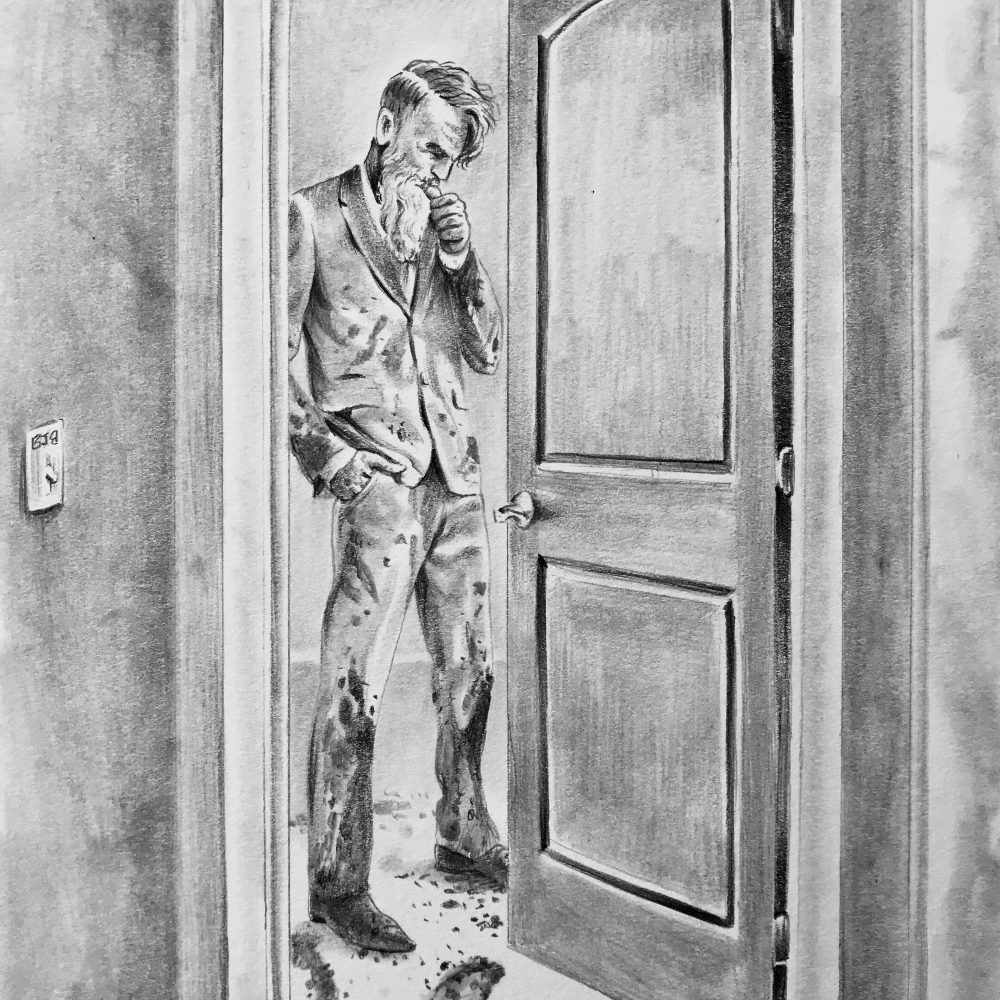 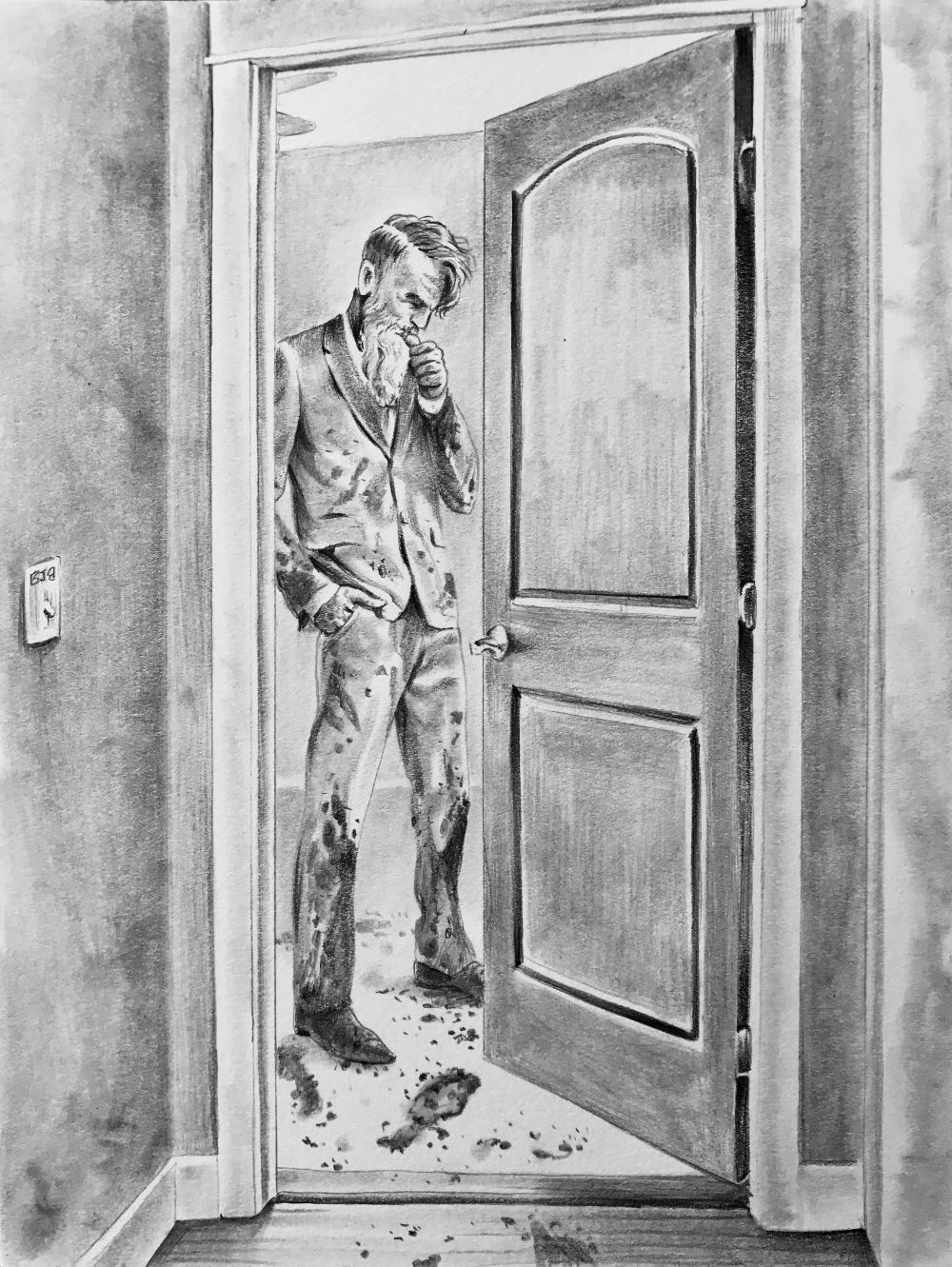 Damn Uncle Fred has never looked better, which is odd considering the cancer. And the death. And all that dirt he had to claw through to get out of his grave. Look at him. He’s lost the extra pounds, his beard is back to peak density, and his skin has flooded with life.

When Uncle Fred showed up at Granny’s house five days after his funeral, she passed out seconds into their re-introduction. That quick switch from grief to joy to terror as Granny remembered verses from Revelations can cause a sort of emotional whiplash.

“Hi, mom,” Uncle Fred said at the door, picking dirt and living worms from his suit. He winced like he had a headache, then shook it off. “I couldn’t decide whether I should come here first or home.” His wife would not have handled this better. At times, she was angry at him. At times, she was confused. No one could help her. Not many tried. She was a part of the family, but never a part of the family. Even Uncle Fred treated her like that.

Aunt Linda, who always here with Granny, decided to keep him in the extra room off the parlor where none of the children used to be allowed. The nephews and the nieces would take shifts with him and monitor his re-entry into the world of the living.

“We’ll see if it sticks,” Aunt Linda announced at the family meeting she put together in the parlor. “If he’s just going to fall apart in a few days there’s no point in upsetting the extended family.” Uncle Marcus—her quiet husband—stood by the door to Uncle Fred’s room with a bat. Uncle Fred peered out through his little window in the door, holding the white curtain back and trying to hear what everyone said about him.

Niece Vanessa, sitting prim on the floor, raised her hand. “What does he eat?”

The family murmured. They all wondered. Aunt Linda nodded to Uncle Marcus, who removed a butterscotch krimpet from his pocket. In several measured movements, Uncle Marcus unwrapped Freddy’s favorite cake, opened the door, and handed it off to Uncle Fred. Everyone watched the man eat the treat just like he used to and they all breathed varied sighs of relief.

Granny sat on the couch behind Aunt Linda, unable to look over at Uncle Fred’s door.

In the night—when he was tired from sitting in this damn room all day—Uncle Fred tended to grow introspective. Nephew Ricky sat with him because, as his parents barked, if he could stay up all night playing Last Fantasy or whatever he must have insomnia and wouldn’t mind spending his evenings with his dead uncle.

Nephew Ricky liked to sit on the other side of the room from Uncle Fred, where didn’t have to look at him space into the ether, bathing in the glow of the television set playing all his old favorite shows on repeat. He had a solid set-up in here. Uncle Marcus, who slept outside the room every night, made Uncle Fred a charming little efficiency apartment befitting of a man hitting his 70s. Damn, though, he doesn’t look his age now. When Niece Vanessa came in for her shift earlier, the man was doing full lunges and squats.

In his daze between sleep and consciousness, Uncle Fred muttered to himself.

“I screamed beneath the dirt,” he said, gripping the arms of his recliner tight. “Until—” He breathed out and relaxed. He swayed his head.

Nephew Ricky played his Neo-Geo Pocket Color over on the musty couch that Granny covered in a tarp. To Ricky, Uncle Fred was always just a presence in his life. Not welcome or unwelcome. He was just at Granny’s house whenever he came over at Christmas, at Thanksgiving and in between. Laughing a boisterous laugh at his own jokes more than others’. He never said things like ‘I have screamed beneath the dirt,’ though.

“I became energy for this universe,” Uncle Fred started shouting. “I navigated particles to each expanding corner and rode the waves beyond the vast void.”

Nephew Ricky turned up the sound on his Neo-Geo Pocket Color to maximum. It didn’t go up as loud as his neighbor Kevin’s new Gameboy Advance did, which pissed him right the fuck off. He couldn’t wait till the holidays.

“But here I am,” whispered Uncle Fred, “coalesced again into this speck of a thing. This creature from which I grew far beyond.”

“I need to pee,” Ricky said, clenching his teeth. He left the room and sat on the parlor couch for some peace. Uncle Marcus must have gone upstairs but Granny sat in the kitchen next to the parlor, its light coning through the dark toward Ricky. She looked at Ricky, her face sinking into the shadows.

“God, Granny,” Ricky said, leaning his head back against the couch, “I am getting so close to beating Metal Slug right now, and I know you have no idea what that means but it’s really difficult and it takes a lot more concentration and skill than you would think.”

Uncle Marcus emerged from the corner. A military man—he was vigilant in his tasks.

“Ricky,” he said. “You suck at Metal Slug and you won’t beat it.” He pulled Ricky up by the collar and shoved him toward Uncle Fred’s door. “You are adequate at watching Freddy.”

As much as he tried, Ricky did not beat Metal Slug that night. Around nine, Uncle Fred shouted into eternity. Sharp light beamed from his pores, and he imploded out of existence, pulling Ricky with him. Pulling Uncle Marcus with him. Pulling Granny with him.

In the morning, Aunt Linda came down to watch her brother. A gentle hum pitched to Fred’s voice filled his room, along with the never-ending sounds of intense 2-D arcade combat.

Nick Perilli is a writer and aspiring librarian living in Philadelphia with a dog, a cat, and a fiancee who have yet to watch Gremlins 2 with him. Work of his can be found in Maudlin House, Five2One Magazine, Empyreome and elsewhere in the internet void. He tweets on occasion @nicoloperilli.