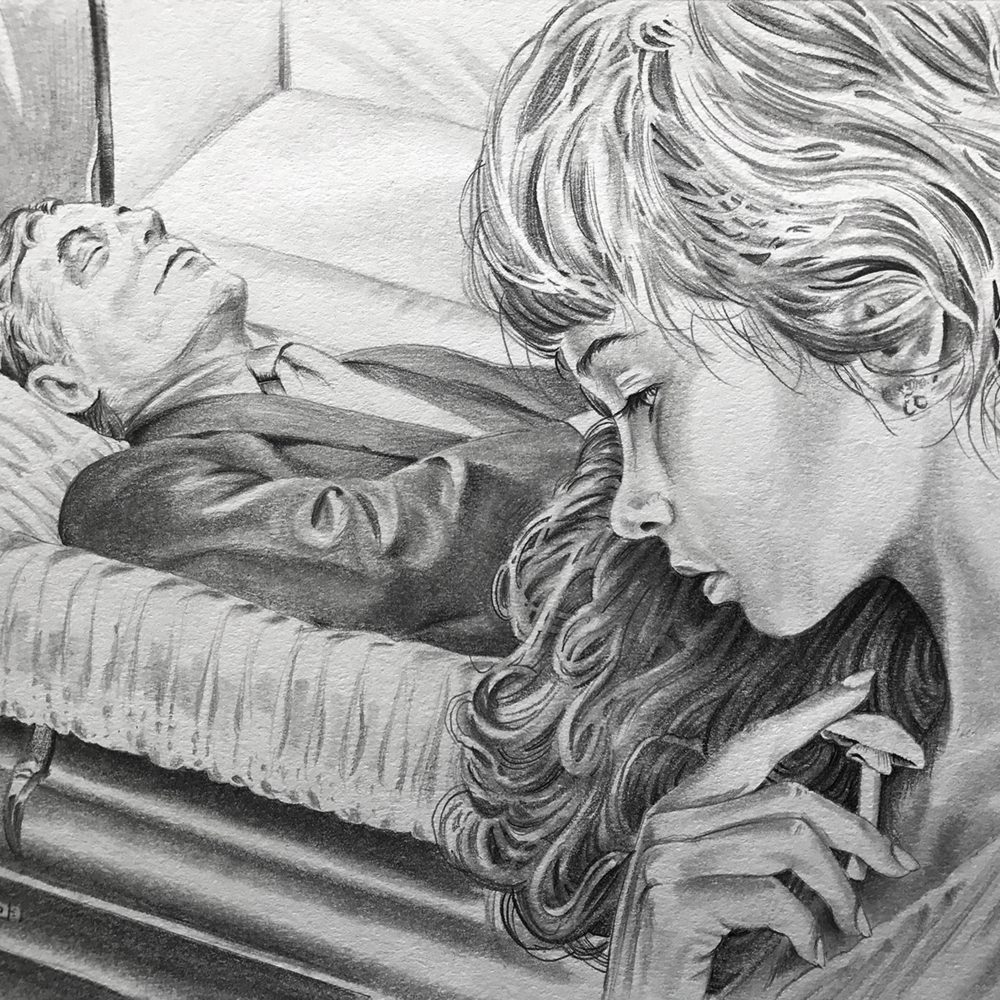 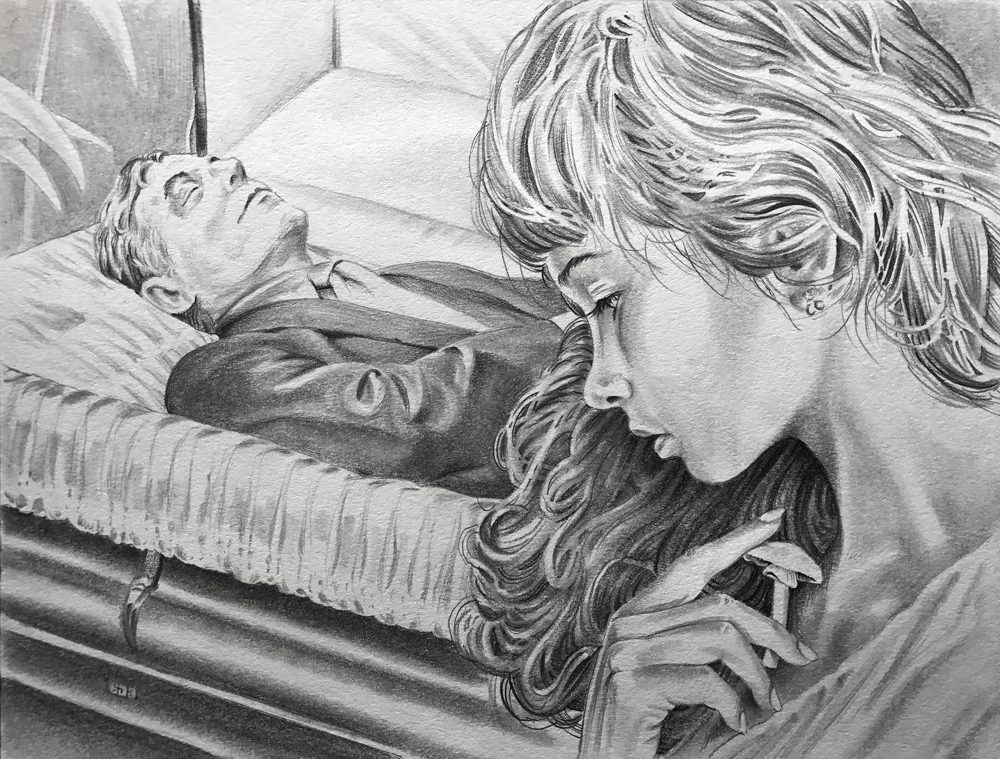 Alice walked into the church in her best black dress. A veiled vetting hung over her eyes from her pillbox hat. Some people were chatting while others loomed around the casket saying prayers. Many waited for the service to begin with their eyes as dead as the corpse. Alice sat in the first row. She wanted to be close to Will.

She put her purse on the seat and moved closer to the casket. Will looked plastic, like the cakes on display in the bakery section at the grocery store. He was perfect, but stiff and unreal. It isn’t fair, she thought. He was right in front of her and she couldn’t hold him.

She remembered their first date: dinner, moonlight, water flowing not far away, the way Will kissed the chocolate frosting from the cake off her lips. She’d gone home that night, kicked off her high heels, and stared at the ceiling from her bed. She envisioned her future with Will: the white dress, the house (preferably one with a pool), the two perfect kids. As she stared at the ceiling she could see each of the fantasies play out like scenes from a movie. She sighed and closed her eyes.

They were supposed to get married.

But Will already had a wife. Out of nowhere he had told Alice that he was married to the love of his life. He wanted to sort things out—had to stop seeing Alice.

She begged him for one last date, pressed her chest close to his and kissed his earlobe. Sung the word please, like it was a song on repeat. Will couldn’t resist.

When the day came, she lit the candles, and when the timer sounded took the soufflé out of the oven. It was her third attempt. It was still a little sunken in the middle, but it would have to do. She was out of time. She set the table. She’d made a salad, honey glazed carrots with mushrooms, and bought a bottle of wine, too. She studied the tiny shadows that the items on the table cast on the walls of the dining room. She loved the house this way, dark with just enough light to create the shadows that often kept her company.

Alice wore the tightest black dress in her closet. The only thing she regretted was that it didn’t have a lower neckline. She fixed her makeup one more time before taking a seat on the couch with a glass of wine and waited for Will’s knock.

Alice was asleep when Will arrived two hours later. In fact, his thunderous fist against the door startled her out of her dreamlike haze so much so that she almost knocked her glass of wine off the coffee table. She stood at attention, pulled her dress down and smoothed her hair. She flung the door wide open ready to throw her arms around him but stopped short when she took in his appearance. He wore a faded Yankees t-shirt and basketball shorts. He used to dress up for their secret dates. Now, he couldn’t be bothered with looking good. He couldn’t even fucking put on real pants, she thought.

He smiled and she stepped aside so he could come inside.

“Sorry I’m late,” he said, shoving his hands in his pockets.

“It’s fine,” she said. She was upset, but as always, seeing his smile made her lose her will to argue. Plus, she didn’t want him to spend those last few moments arguing.

She pulled his arms around her. There was a time when they would greet each other and would change from solids to liquid, the two of them pouring into each other. But that night, hugging him was like stacking bricks. She blinked to stop her eyes from stinging, then pulled away.

“Dinner’s probably cold, but I can zap our plates in the microwave,” Alice said.

“Listen, Alice, I can’t stay too long…” Will said.

“I know,” she called from the kitchen. “I won’t let this take too long.”

Will ate in silence. It was up to Alice to make small talk, which was something they never had to do before. It proved things were different, that things were final. She pushed her carrots around with her fork until Will stood up.

“I’m sorry, Alice. I’m not feeling so well and I better get home. Sheila’s probably wondering where I am.”

Alice nodded. It would only be a few hours before the Destroying Angels mushrooms launched their attack on his kidneys and liver.

Alice did a lot of digging to find out about the funeral, but it didn’t bother her. After following Sheila to the Bayer Funeral Home, money was all it took for the receptionist at the funeral parlor to give her the time and date. She had leaned over the counter in her best low cut top and slid the envelope with money over.

Shame it had to end this way, Alice thought during the service. She would have given Will her world, everything in it. But he wanted Sheila. Sheila was always in the way.

When the service was over, Sheila got up and gazed at Will one more time.

Alice placed her hand on Sheila’s back and Sheila jumped.

“Sorry for your loss,” Alice said.

“Thank you,” Sheila said, dabbing her eyes with a handkerchief. She tilted her head at Alice. “I don’t believe we’ve met. How did you know my husband?”

Racquel Henry is a Trinidadian writer and editor with an MFA from Fairleigh Dickinson University. She is also a part-time English Professor and owns the writing center, Writer’s Atelier, in Winter Park, FL. In 2010 Racquel co-founded Black Fox Literary Magazine where she still serves as an editor. She is a contributing editor for Burrow Press' FANTASTIC FLORIDAS and the nonfiction editor of Fairleigh Dickinson University's alumni anthology. On the freelance side, Racquel edits books, academic work, and ghostwrites Romance novels. She is also a board member for The Jack Kerouac Project, an Orlando-based writing residency. Her fiction, poetry, and nonfiction have appeared or are forthcoming in places like LOTUS-EATER LITERARY MAGAZINE, THE BEST OF THERE WILL BE WORDS 2014 Chapbook, MOKO CARIBBEAN ARTS & LETTERS, REACHING BEYOND THE SAGUAROS: A COLLABORATIVE PROSIMETRIC TRAVELOGUE (Serving House Books, 2017) and WE CAN'T HELP IT IF WE'RE FROM FLORIDA (Burrow Press, 2017), among others.