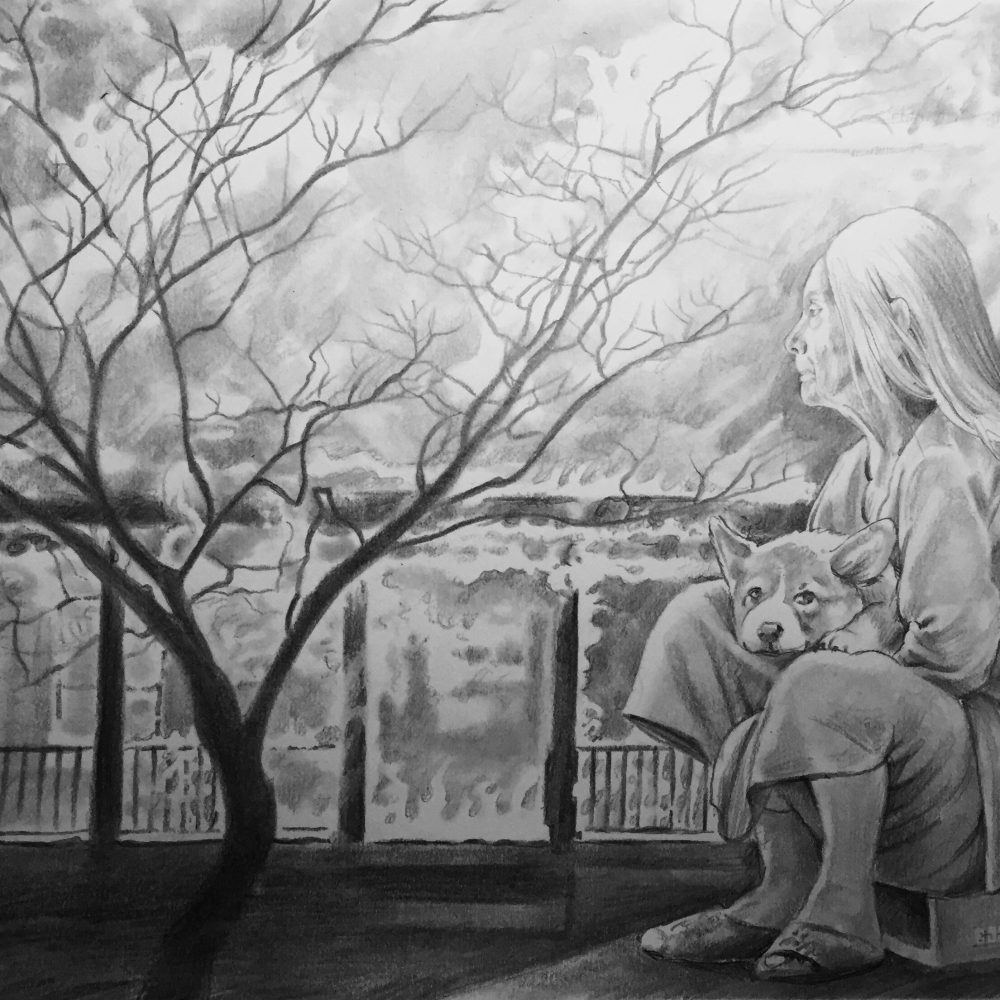 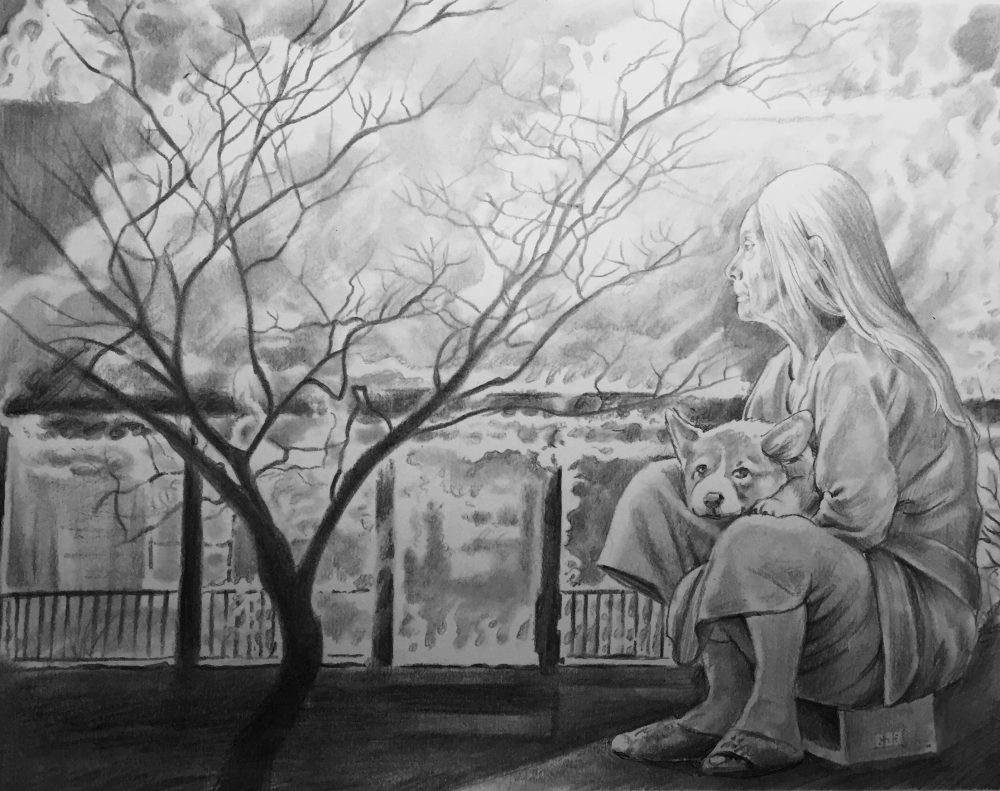 I’m suddenly awake, without understanding why. The sounds don’t make sense at first: a crackling, whooshing, shouting mayhem filling my room. I struggle into a t-shirt and a pair of sweatpants then stumble down the stairs—still drunk, I realize. How many hours has it been since I passed out? I join my housemates, Ralph and Graham, on the front steps, where I can finally see the fire that has enveloped the house across the street. Flames caress the eaves and lick the window frames, wrapping the house in ruinous arms. We watch, but there is little to say.

The firemen stand and wait as the house begins to collapse, soggy, hot walls folding in on themselves. They’ve done what they can. My neighbor sits on the curb, watching her home shrivel and shimmer. She wears a plain blue nightgown, a gray wool blanket on her shoulders, her snowy white hair hanging around her face like icicles. Her face is a blank as the house burns, her hands mechanically stroking the ancient Welsh Corgi in her lap, combing her fingers through his rough fur. The Corgi whines and he buries his head in my neighbor’s armpit. I don’t know her name. Walking down the steps, I stand on the sidewalk and look at our two houses, the one, fiercely consuming itself, the other, staunchly solid in the warm glow. I wish I knew her name, but I don’t, so I keep my distance. That’s how they do things here in this city I have just begun to call home—pity from afar.

In the morning Ralph, Graham and I crowd around the television with a loaded French press and an ashtray: a physics grad student, a bicycle mechanic and a waitress, respectively. A craigslist composite. The only thing we have in common is this house, and now, the inferno. We drink coffee and chain smoke as we watch the news. As if these things will help us understand what is going on; as if smoking three cigarettes in a row will make us feel better. I smoke five, and I don’t feel a thing. We hover in the kitchen, strung together by the proximity of our bedrooms and the hours we have spent awake, watching the coals smolder. We have never banded together in this way. It seems unlikely that we ever will again.

There were six fires last night, four houses and two cars, all within walking distance. A serial arsonist, the news anchors say. They show shaky footage of an old Cadillac on Church Street overflowing with flames, its gray paint job bubbling and blistering like molten silver. A man who lived three blocks away died; his wife might or might not survive. There are no suspects, no mug shots, just a slideshow of blackened ruins. Ralph swears under his breath like, holy fuck, isn’t it so terrible, but his thirst for the drama of destruction is obvious. Graham pours some Jameson into his coffee cup and stares out the window. His silhouette glows gold against the glass and past his outline I see flakes of ash floating in the breeze. I can’t tell if he is sad or scared or sympathetic—and I realize this is because I don’t know him at all. We talk about our neighbor and Ralph says her name is Elsa.

The husk of Elsa’s chimney is all that remains. A few days pass and they hang orange barrier tape around the site. A week or two goes by and they begin to clear away the rubble. A dumpster and a porta potty are delivered. I watch them shoveling cold ash and I wonder if the soot on the maple tree in the yard will ever come off. I wonder if the blackened branches are still alive, if they will ever grow leaves again.

Later that week I come home late and pause on the front porch, eyeing the charred building site across the street. The dumpster squats in the driveway like a guard dog, and the porta potty gleams like a fluorescent monument in the moonlight. Everything looks like something else, something otherworldly, at this time of night. A cat yowls. Someone listening to talk radio drives by with their windows down. They arrested the arsonist that morning and it turns out there’s no conspiracy. He’s just a stupid twenty-six year old kid I’m pretty sure I met at a party once. I told my housemates this and Ralph was gleefully scandalized. The news anchors try to convey relief—see, we got him—but the city is still scared. Or maybe the city doesn’t care. Maybe it’s just me.

I wander down the front steps and duck under the tape, into the ruins. The rubble is mostly gone now. The scorched wood has been cleared away and the earth is freshly raked in places; I can see the teeth marks on the ground. I kick over a chunk of cement that is loose, and the sound it makes as it falls is like crumbling chalk. The air is sour but peaceful as I ramble along the floor plan. The moon, huge and bloodshot, not quite full, hangs crooked above me. This is where the kitchen sink was, I think to myself and I slowly rotate, imagining the layout of the kitchen, the refrigerator over there, the pantry just through there, and the rooms beyond it. These inventions soothe me, and for a moment I imagine that I knew Elsa’s name before her house burnt down. I imagine visiting her here and sitting at her enormous kitchen table, just over there, by the bay window that looked out over the back yard. I imagine her drapes and her rolltop desk and the pattern on the linoleum. I’m a child again, back on my family’s land, creating a home out of rocks and dirt and trees, and I am in the rubble, reinventing one for Elsa.

Lily Brooks-Dalton’s first novel, Good Morning, Midnight, was recently published by Random House and will be translated into more than half a dozen languages. Her previous book, the memoir Motorcycles I’ve Loved, was an Oregon Book Award finalist.