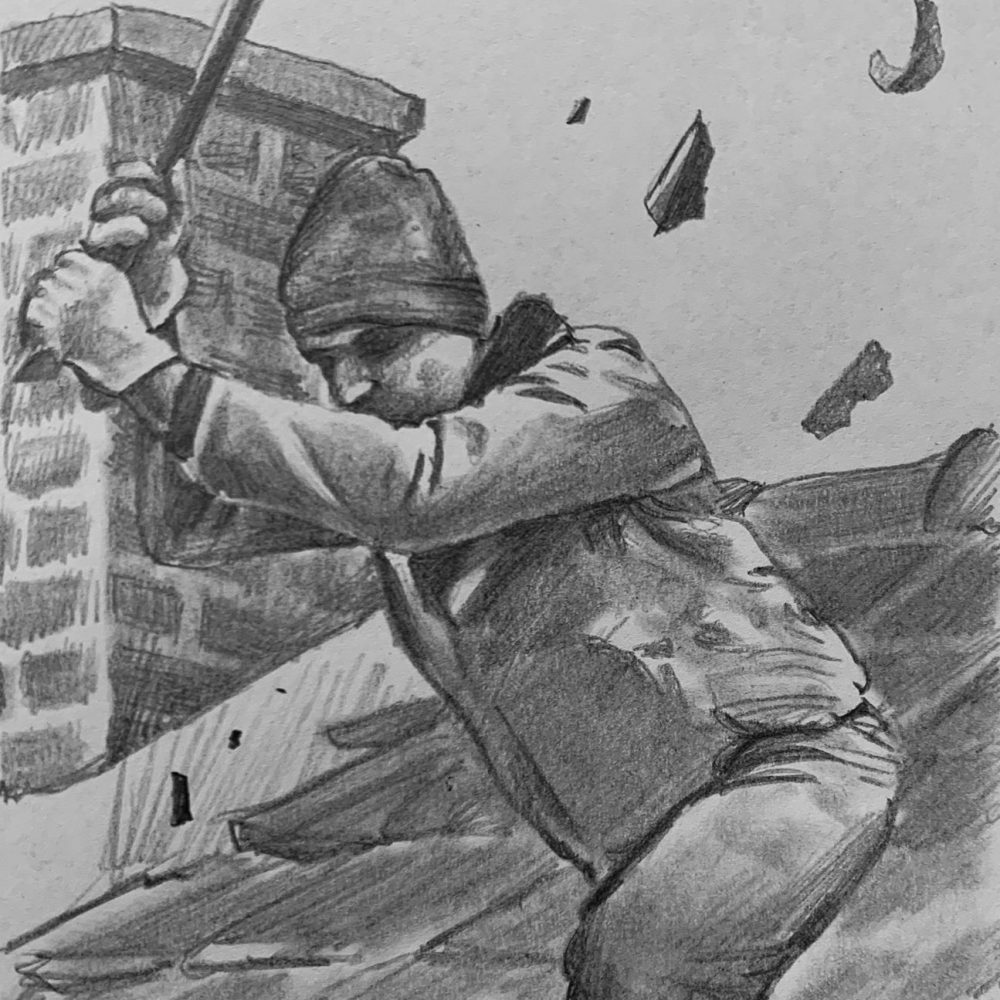 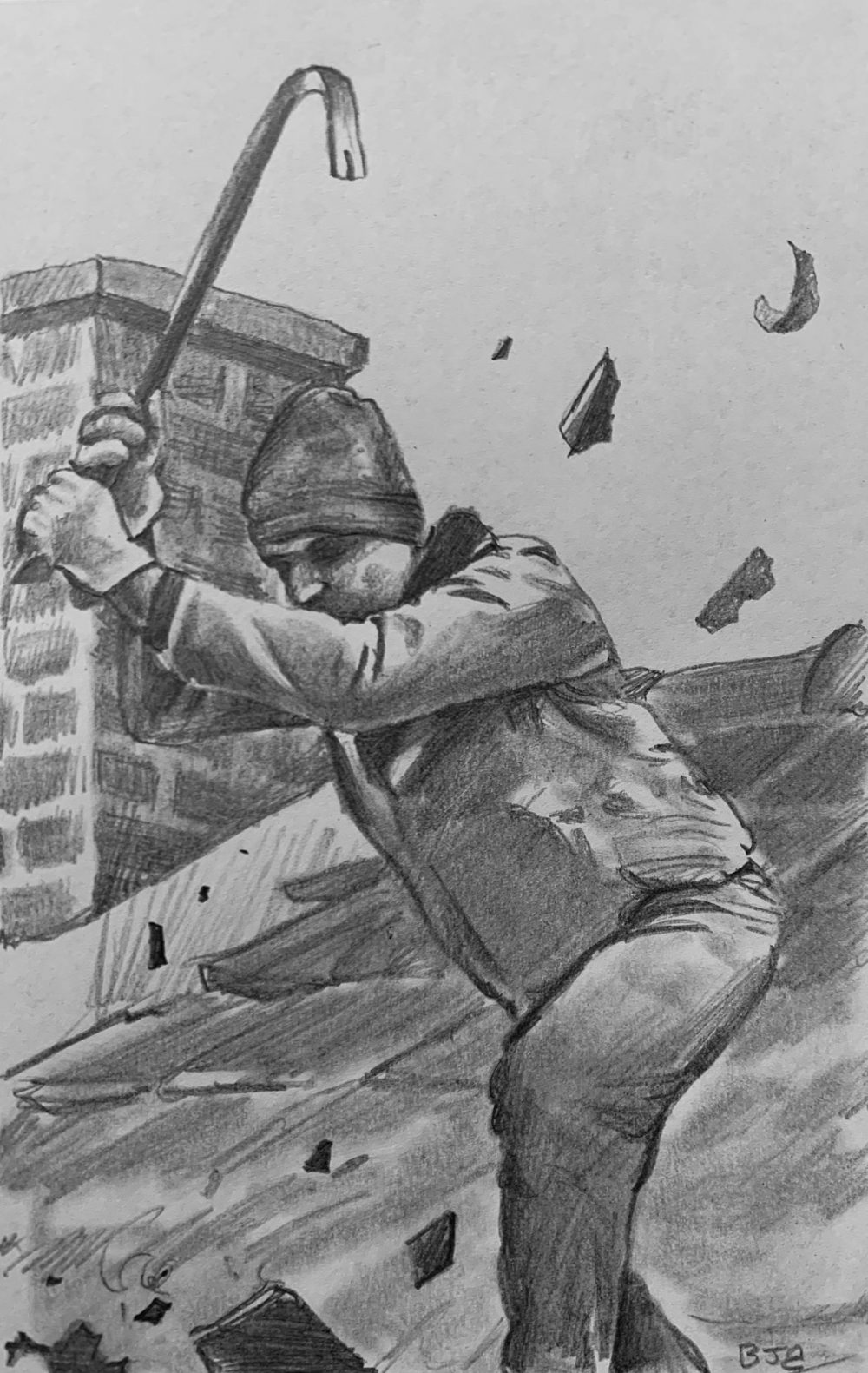 I was woken by men on the roof. Men! On the roof! On my roof.  I lay in bed at first, listening. It sounded like hammers and drills and yes, definitely someone on the roof. So I snuck out of bed and over to the window. I wasn’t afraid because it was just so audacious. It wasn’t like they were creeping about–crunch crunch, rustle rustle, that would have been scary. They were drilling! And hammering!

It was hard to see them properly from the window so I went downstairs and straight out onto the street, emboldened by their boldness.

There they were! Definitely men. Definitely on my roof. Well, I could see them clearly now! They were wearing high visibility jackets. They looked industrious. Three of them. Peeling back my roof tile by tile.

And it wasn’t hammers and drills. It was crowbars and saws. Easy mistake.

One of them walked to the edge and looked down. I pulled my dressing gown tighter.

“What the fuck do you think you’re doing?” (I told you—emboldened.)

“We’re working on this roof.”

“Whose orders? It’s my roof. I make the orders.”

“Sorry? Get the fuck off my roof!”

“It’s two in the morning! I’ll call the council!”

“Council’s what gave the orders.”

Well that stopped me.

“What do you mean, ‘Council’s what gave the orders’?”

He nodded down the street. I looked. All along the street men in yellow jackets perched on people’s roofs. Peeling back their tiles. My neighbours were coming slowly out of their houses, hazy with sleep.

Mr. Wong shouted up at his men. They ignored him.

Josie Ansel shouted up at her men. They carried on working.

Dimitri Mantzarlis and his family shouted up at their men. They started on the windowframes.

The workmen climbed down from the roofs. A hiatus. Christmas day in Flanders Fields.

No. They put their tiles in the lorry and ascended again. Half the roofs in the street were now bare wooden beams. I could see right into Ms. Grant’s bathroom.

“The council ordered it,” I said.

My man came to his edge again. My edge.

“It’s not the council’s orders.”

He paused, I assume for dramatic effect. This was already roundly achieved by the stage from which he spoke, namely the dismantled remains of my own house.

“It’s the Queen. The Queen’s asked for these houses back.”

By now the men had started on the brickwork. It was clear they meant to be very thorough.

“Not technically.” My man had appeared again, much lower to the ground now, “Technically it’s all loaned to us by the Crown.”

“And she can just ask for it back?”

“Well what are we going to do?”

The street was full of us by now. Everyone was out of their houses and most of the houses were gone, flat packed onto the articulated lorry.

“Speak to the council I s’pose.”

The next morning there we all were. All the neighbours I mean. All the houses were gone and so were the men and so was the lorry. In front of every family stood a motley collection of their belongings, neatly arranged atop the grey square of the foundations of what used to be their house.

And I’ll say this for our community, we pulled together. This is where we could have broken apart. Could have individually tried to resolve our problems. But we didn’t.

Number 42 passed out cookies. Number 12 started up their generator. Number 31 fired up the BBQ. Someone had a bit of tarp and someone else had another and before you knew it it was all strung up along the street, like an enormous tent. Numbers 54 and 15 had some bunting left from the Jubilee so we strung that up too and suddenly it all began to feel rather hopeful.

One of the youngsters from next door somehow got the TV working and we all crowded round to see if we’d be on the news. But of course, all the news was on the Royal Wedding. And didn’t they look lovely!

“As a gift for the nuptials of her grandson, Her Majesty Queen Elizabeth II has had a new abode built for the couple in the grounds of Kensington Palace.” The camera panned over to the house and suddenly there we were.

Number 23 made up most of the right wing and the imposing Doric columns that used to be at the front of 64 formed the entranceway. Other than that it was difficult to pick individual houses out. Most of them were made in the same style in the same era by the same architect, you see. It made for a lovely symmetry.

Everyone was quite excited to be honest.

I don’t think anyone did call the council in the end.

Bryony Byrne is a writer and performer based in London, UK. She performs improv regularly at London's leading improv theatre and has written for Aesthetica Magazine for many years. She hopes you enjoy her work.