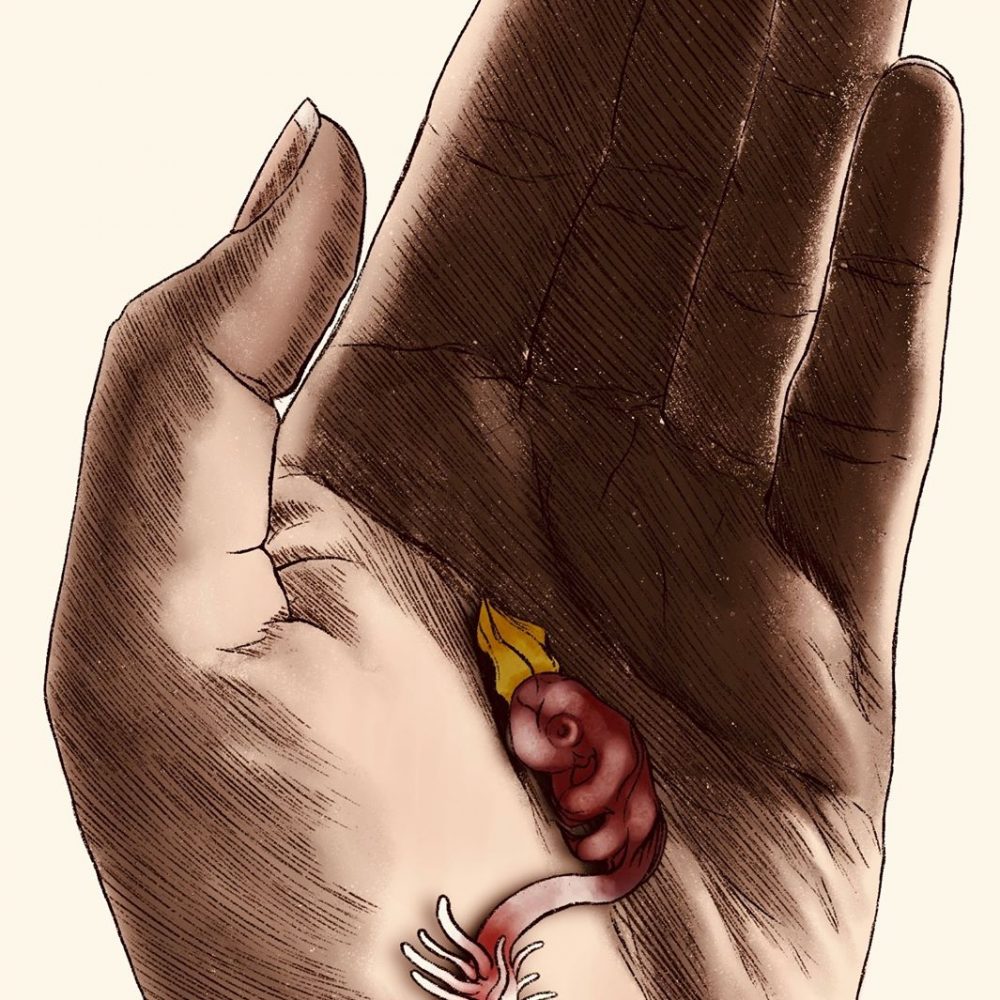 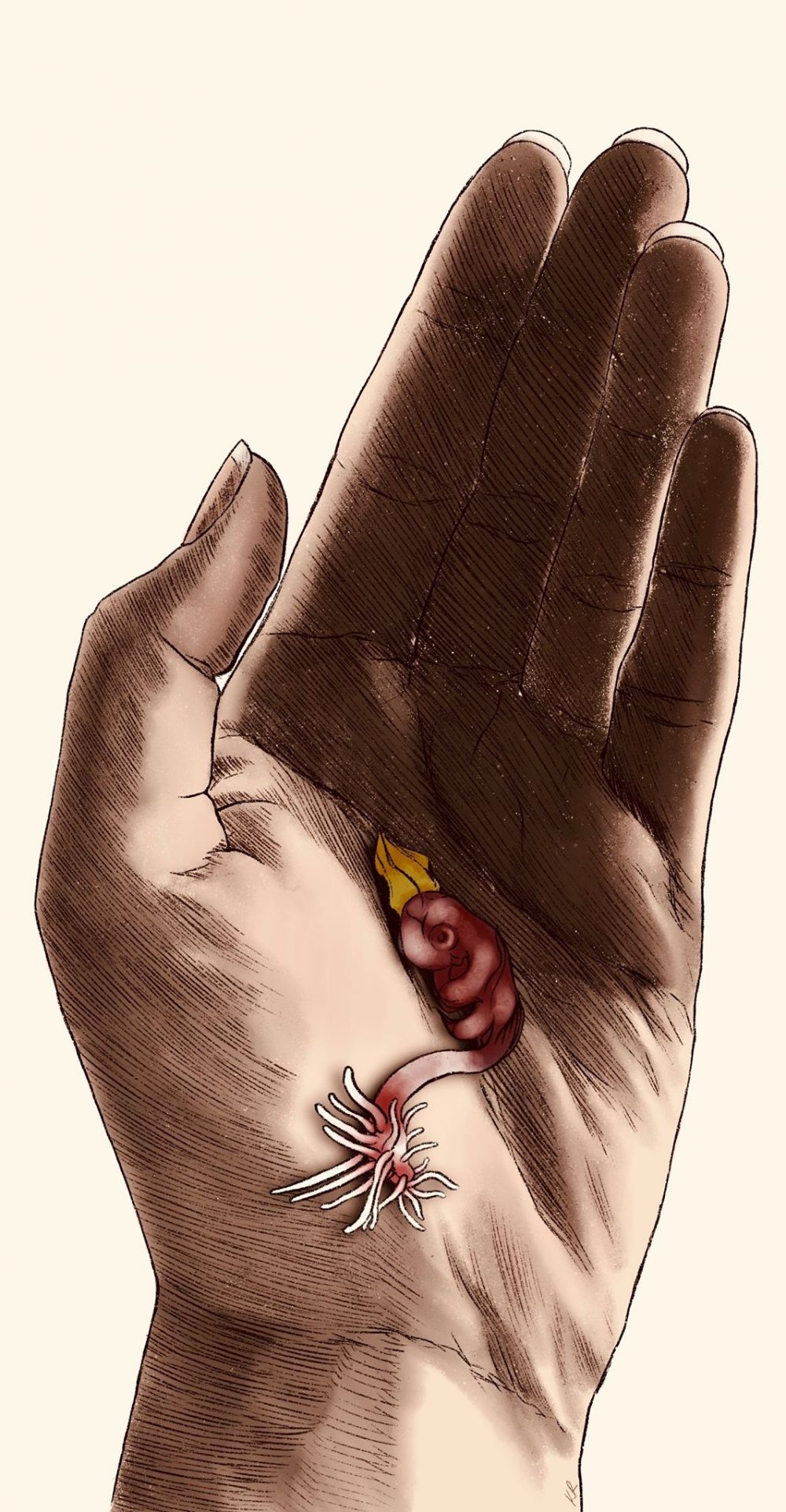 I know she fucked the tree. A weeping willow, our yard. Flushed, throes of passion, a guttural moan on its invisible lips. My sister passes by the window, wiggles her fingers, blows it a brazen kiss.

I scowl. I imagine the bills I’ll get from having to call an arborist to deal with the upturned roots, a therapist to deal with my stress about my sister’s expulsion from college, her strange obsession with boudoir botany.

Maria’s grin is a blossom of mischievousness. “Flirting.”

My sister loves nature. Succulents, fiddle leaf fig trees, red bamboo. None are safe. She’s naturally drawn to the flora of life. Has been ever since she was a baby when she took to sucking on vines instead of bottles. Nights, she cloaks herself in ivy. Claims she can grow flowers in her palm.

I watch her fondle a potted viola. “Get ready for dinner.” I check my watch. She’s still in her grubby green bathrobe. “He’ll be here at eight.”

Maria lets loose of the plant and moves for the stairs.

I sink into the armchair, rub my brow. I think of later tonight. Of after dinner. Of bacon. Of a drive-thru and In-N-Out Burger. Of silently eating in my car while my sister sleeps.

Tom stares at Maria. He hasn’t touched his tempeh. His tongue has practically red-carpet-rolled out his mouth like a cartoon wolf.

Tom’s a very handsome temp from work. Cheekbones like glass, eyes like burnt charcoal, his fingers fly fast across the keyboard and I take my lust out by setting him up with my sister. They’re the same age. Both beautiful and young and their breath always smells better than average. Secretly, I love him, but I’m older and I’ve been told I’m too sad to satisfy a man and only recently free to date again.

“Delicious,” Tom says, breaking the silence to ooze enthusiasm. “I can’t believe it’s not real meat. I’d serve this every damn day if I could.”

I watch Tom chew the gummy piece of faux meat. He hates it. But still he eats it, eats it for Maria who’s chowing down on her fat slice of tempeh like it’s a Butterfinger bar.

Across the room, I stare at a picture of my dead husband. Mowed down by a drunk driver. Maria was the only one who said nothing those torturous long months. Who never wondered when I’d snap out of it, who’d only shriek at others when they asked me how I was coming along. Maria’s shrieks got well-practiced after her two month stint at the psych hospital. I’m the one who got her out, years ago, against our mother’s wishes, so maybe we owed each other something. Maybe we’re just sisters. Maybe we are each other’s protection.

Maria floats a warm smile to Tom. “We must adjourn for a mere moment.” When she stands, she nearly bows. I bet he loves that. He’s never had a woman bow to him before. I bet he’s popping a boner right now, beneath the table.

We meet in the kitchen. Still within earshot, we whisper among the china cabinet and our dead mother’s beloved Hummel figurines.

“What’s going on, Cat? You barely touched your food.” I roll my eyes. She doesn’t want to talk about boys. She wants to talk about how I’m not showing her plant-based meal enough love.

“I have plans later.”

“You burger loving, bitch,” she swears, socking my arm.

I laugh. “What do you think about Tom?”

Maria shrugs. “You can have him,” she says, and flaps a lazy hand. “He’s not my type.” She eyes the window. She’s already flushed, her eyes on the crooked fern out back.

Tom smells like corn nuts and saw dust. I imagine telling Maria this and her sigh of exasperation is enough to kill me dead on the spot.

He rolls up onto his elbow, rolls off the condom. I stay under the sheets, stare at the ceiling.

The question hangs in the hair like a noosed body.

I want to say something to take his mind off Maria, to disgust him, to make him notice me, my small face, my awkward body, so, stomach clenching, hands twisting sheet corner, I say, “My sister fucks plants.”

Tom flops onto his back. His eyes wide and unblinking. “Fascinating.”

I watch his erection throb against the sheet.

“In-N-Out,” I say, suddenly wanting him out of the house and away from Maria. “Can you drive me? I need a bacon cheeseburger.”

Tom’s handsome brow furrows. In another life, he’d be a politician. “In-N-Out doesn’t have bacon.”

I roll over onto my side. I needle the bridge of my nose, needle it into oblivion. “Jesus, Tom. You’re just full of bad fucking news, aren’t you?”

Hours later, I arrive home, fed and fat. I find Maria in the kitchen, sitting on the floor, eating leftovers.

“You smell like meat,” she says, tracing my darkened silhouette with her fork.

“Tell me about it,” I say, joining her on the floor. My stomach feels greasy from the burger, from Tom, from some strange artificial sense of connection. My husband and I never used condoms. I just sloppy-second-screwed the office temp. All I want is to eat and to fuck and I can’t even do that right. Hunger never felt so hard.

Together, we sit shoulder to shoulder in silence. Maria smells of wild clover, of honeysuckle. We listen to the whisper of trees across the street. She curls her hand around mine. Passes something soft, something quiet. I open my palm. Freshly grown morning glory. I have to squint to believe it. That we are both alive.

Jules lives in Arizona. She likes to smell old books and drink red wine. Her chapbook All The Ghosts We've Always Had is out from Thirty West Publishing.