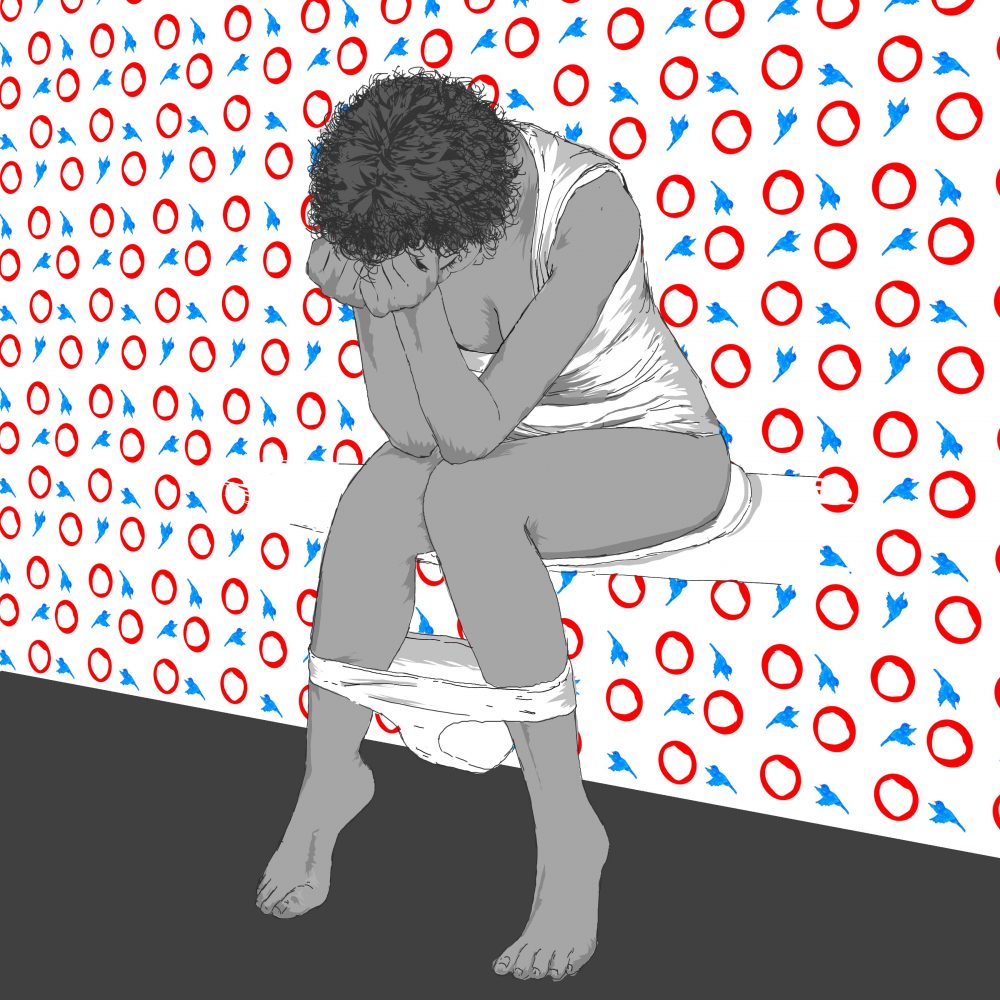 Six hundred miles south of Darwin there is a township. It has a main street and a side street. At the end of the side street there is a house clad with fibro and corrugated iron. On one side a 1976 Holden Kingswood lies rusting. On the other side there is an outhouse, which is locked. In the outhouse there is a girl. She has the figure of a woman, but is only sixteen.

She is squatting, waiting. Her calves are aching. Sweat pours down her back into the cesspit. As her sweat breaks the silence it makes an echoing, tinkling sound, which is closely followed by the upward buzzing of flies. She swats the flies away lazily, devoid of malice or intent. She flicks her head down, intent on the toilet paper. If someone peered through the holes in the plywood she would appear compulsive. The whiteness of the paper contrasts with the colour of her skin, mocking her.

Eventually she gets up. ‘I’m late,’ she texts him.

Over dinner she sits in testy silence. Most of the kids sit mutely, drowned out by their parents’ anger. Today it was money business. Yesterday was her father’s mob. That cost them the kitchen window.

After dinner she finds his reply. ‘Wht do u mean?? xxoo luv u’

It reminds her of that Justin Bieber song she’s been hearing on the radio.

‘What do you mean

when you nod your head yes

but you wanna say no

what do you mean?’

It was a big hit at school, and the whole netball team had watched the music video in the change room. There was a girl and Bieber, and it looked like his first time. It did not look like hers. She pranced around in lingerie and it was maybe yes maybe no.

Bieber was too whiny for her liking, but the girl she thought about for days afterwards. Her skin was the perfect tone, not too dark to be considered unattractive. No scars, wrinkles or mosquito bites. The next day she went to the store. The closest thing they had to lingerie were hipster briefs, four for ten dollars. Either way it didn’t change the sex.

The next day there is another message and four missed calls. ‘Luv u, will b ther 4 u whoteva happens’

What a fucking useless dipshit.

She spent most of the day pacing to the outhouse and back. She told everyone she had the runs. Nobody cared. She was vigilant, willing her body into twinges and pains. The racing of her heart she could only partially ignore. Occasionally she slapped herself hard, on the cheek, though she cheated and softened the blow just before contact. The pleasure seemed so worthless now. It had mostly been his pleasure, anyway.

‘Said you’re running out of time

what do you mean?’

The phone stayed silent that day, and overnight as well.

The following day she felt better. She would tell her parents she had to go up north for netball. The school wouldn’t care – at least she turned up most days. The money she would get from Mac’s. Mac’s was short for MacGuire’s. It was located on the corner of the main street, and was a favourite with the truckies going to and from Alice Springs. On busy nights they had to wait on the main street, passing time with cigarettes and obscenities.

At eight she changed into her best dress, blue birds on white. She avoided the sound of tears in the living room and went out by the back door. Eddie was playing in the dust as she walked by.

‘Eh sis, you’ve got blood on your dress,’ Eddie giggled. ‘You no want go town in that!’

She looked down. It was spreading over the birds, picking them off one by one.

Eddie was right. She couldn’t go to town in that.

Yi Chao Foong lives in Tasmania, Australia. He can usually be found rockclimbing or bushwalking. In his spare time he practices medicine. His other work can be found in djed press and vertical life.