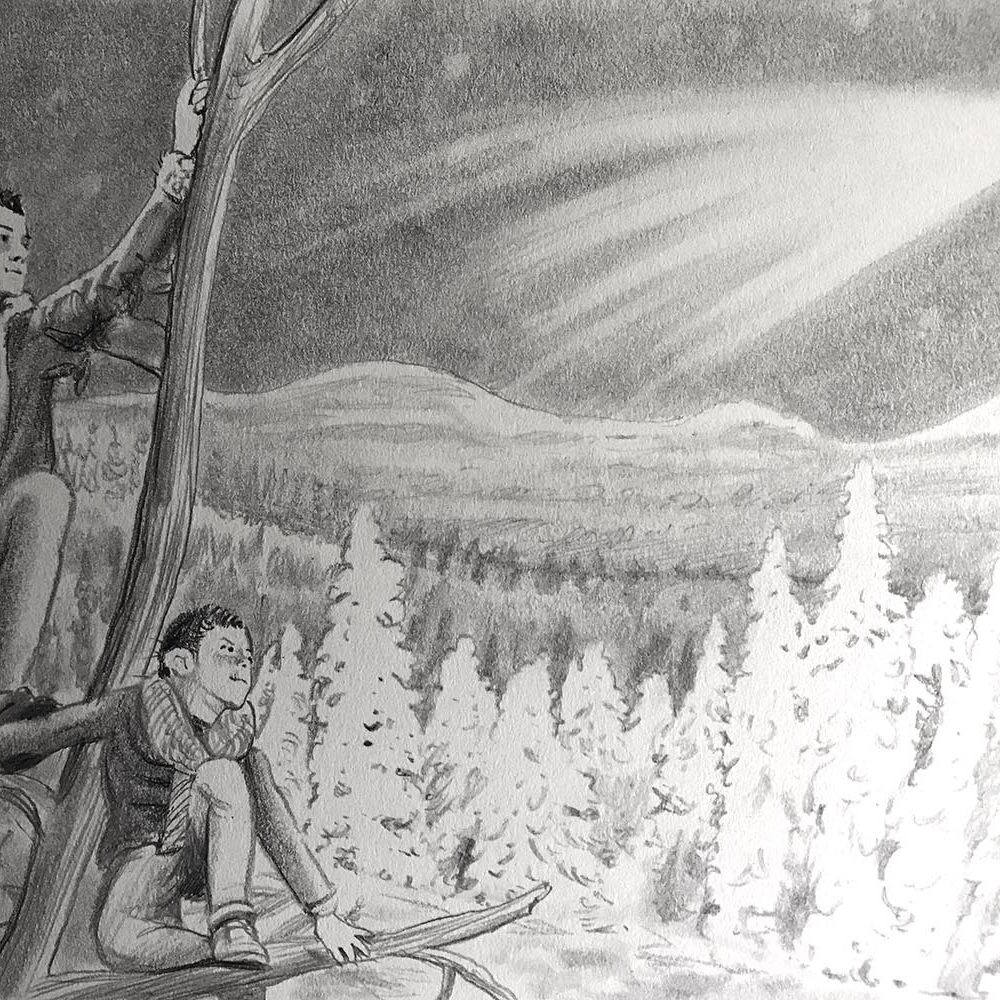 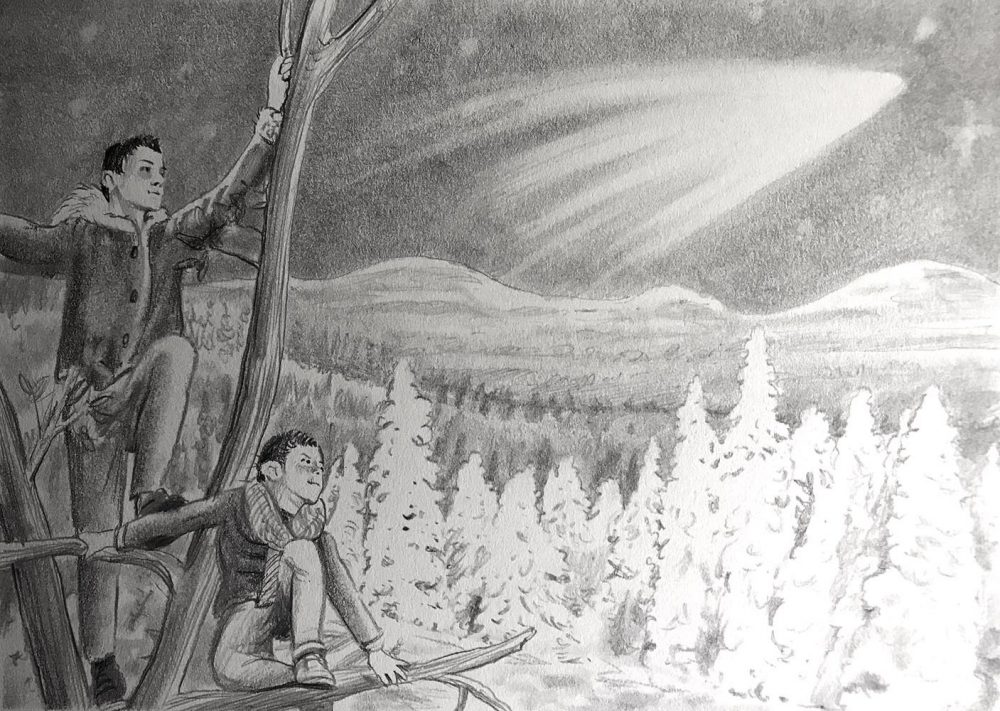 Oliver scrubbed crusty gravy from his little brother’s plate when he peeked up to see the comet shining through the scratched glass of the kitchen window. He was gone before the plate sank to the bottom of the dirty dishwater.

He snatched the only two coats off the wooden hangers in the hallway closet and ran to his brother’s bedroom, where he fumbled through a pile of clothes to find enough layers to keep the boy warm. A scarf and a thermal shirt. Gloves. He scooped them into his arms.

When Ben reached Oliver, Oliver grabbed the boy’s shoulders and kneeled before him. “Lift up your arms,” he said, and the boy did so without any questions. Oliver shook as he covered the boy’s body.

Ben clapped his hands and smiled. “He’s back,” he repeated as Oliver tightened the scarf around Ben’s neck.

“We need to go see him,” Oliver said, extending his hand. Ben took his brother’s offering, and, together, they ran into the forest.

“Pa!” Oliver cried. “Pa!” For a moment, he became the coyotes resting in the distance. Focused and broken, but mostly hungry. Ben was his echo—a learning pup. His voice soft—and, then, even lighter until it was lost among the breeze.

The brothers ripped through the dying shrubbery. The branches crackled, and vines snapped. Oliver pulled Ben along. The young boy huffed loudly; his breaths became as thick as the fog nipping at his ankles.

Their feet stomped in the gathering snow. A new heaviness burdened each step.

“Pa!” Oliver called again. “Pa!” he couldn’t stop calling. His voice was a song. It was a melody that he believed the stars and sky already knew.

The comet’s glow pulsed in the sky. As the boys called it, it lived. It was a heart—both theirs and his. There was a time when they were the same.

Ben’s tiny body plunged forward when he saw the comet’s light. He arched his back, and his mouth became agape. His arms moved like wings, flapping behind his body. Still, he called. “Pa! Pa!”

They reached the clearing and stopped. All that remained was a lonely, snow-covered oak tree.

Oliver watched when Ben darted toward the tree. The boy howled as he ran; the sounds didn’t stop as he jumped for the limbs—any, all, he would take whatever.

Even a boy is old enough to understand defeat.

He sat on the snowy ground and began to cry.

Oliver looked on and waited—for anything.

When it didn’t come, he listened to his brother’s voice. “We’re too far away, Oli,” Ben said. “That’s why he’s not answering us.”

Oliver gazed into the sky. When he turned back to Ben and spoke, his voice was different. “We have to get closer,” he said.

Oliver ran at the tree and kicked it as soon as it was within reach. The bark didn’t fall away when he pulled his boot back.

Oliver bent down for Ben to climb aboard his back, and Ben wrapped his arms around Oliver’s neck and moved his knees to his sides.

Oliver reached for the first limb and pulled. Then, again. And, again. Upward they went.

The brothers stood at the highest point in the snowy forest. So high that some of the birds looked at them enviously. “Pa!” Oliver called. “Pa, answer us!”

Ben watched his brother yell into the sky. The sounds were harsh and angry, but he didn’t cover his ears. Instead, he slowly crawled off Oliver’s back and joined his brother’s call.

“I don’t know,” Oliver replied. “Maybe it’s not him.” He looked down at his baby brother.

Ben grabbed Oliver’s hand and squeezed it. “It’s him, Oli,” he said. “But maybe we still aren’t close enough.” He pointed to the sky.

A tear rolled down Oliver’s cheek. “Okay,” he said to Ben. “But it has to be your decision. You have to decide.”

They grasped hands and leaped toward the stars.

When Oliver was seven, his pa took him stargazing on a hill. Oliver didn’t care about the stars or the mysteries they contained, but he loved the man beside him.

The man sat up carefully and grabbed his son. He pulled the boy in closely and took his hand into his own. He squinted and pointed to the brightest star in the sky. “That one,” he said.

Oliver leaned in and focused as hard as he could. “The shooting star?” he asked.

“That one, but it’s not a shooting star.

“Shooting stars die. Comets—and that right there, son, is a comet—can last for hundreds and thousands of years.”

“Just because something can’t be seen doesn’t mean that it’s gone, Oliver. You see, comets come back,” he said as his voice began to trail off into the damp air.

Oliver turned to face his pa, and when he did, the man he adored was crying.

Bradley Sides is a contributing writer at Electric Literature. His recent fiction appears at The Airgonaut, BULL, Fluland, Literary Orphans, Rose Red Review, and elsewhere. He lives in Florence, Alabama, with his wife, and he is at work on his debut collection of short stories.