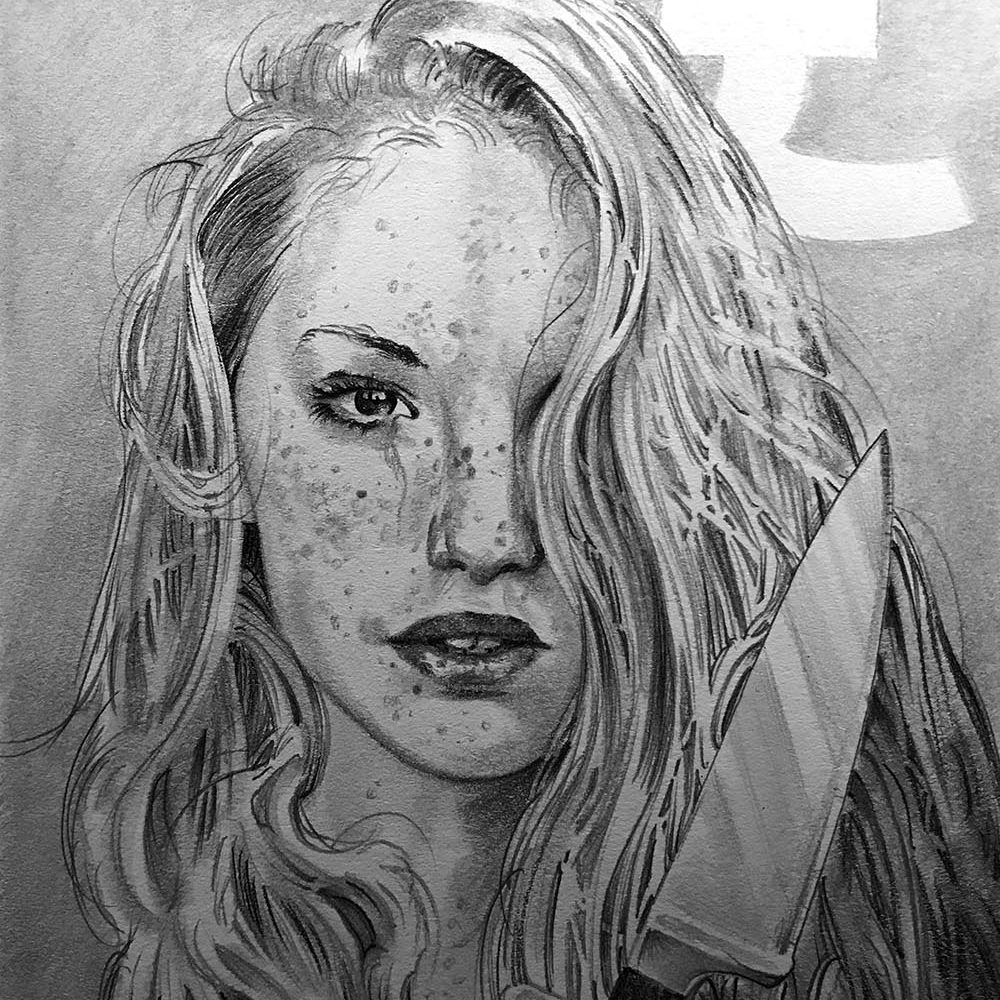 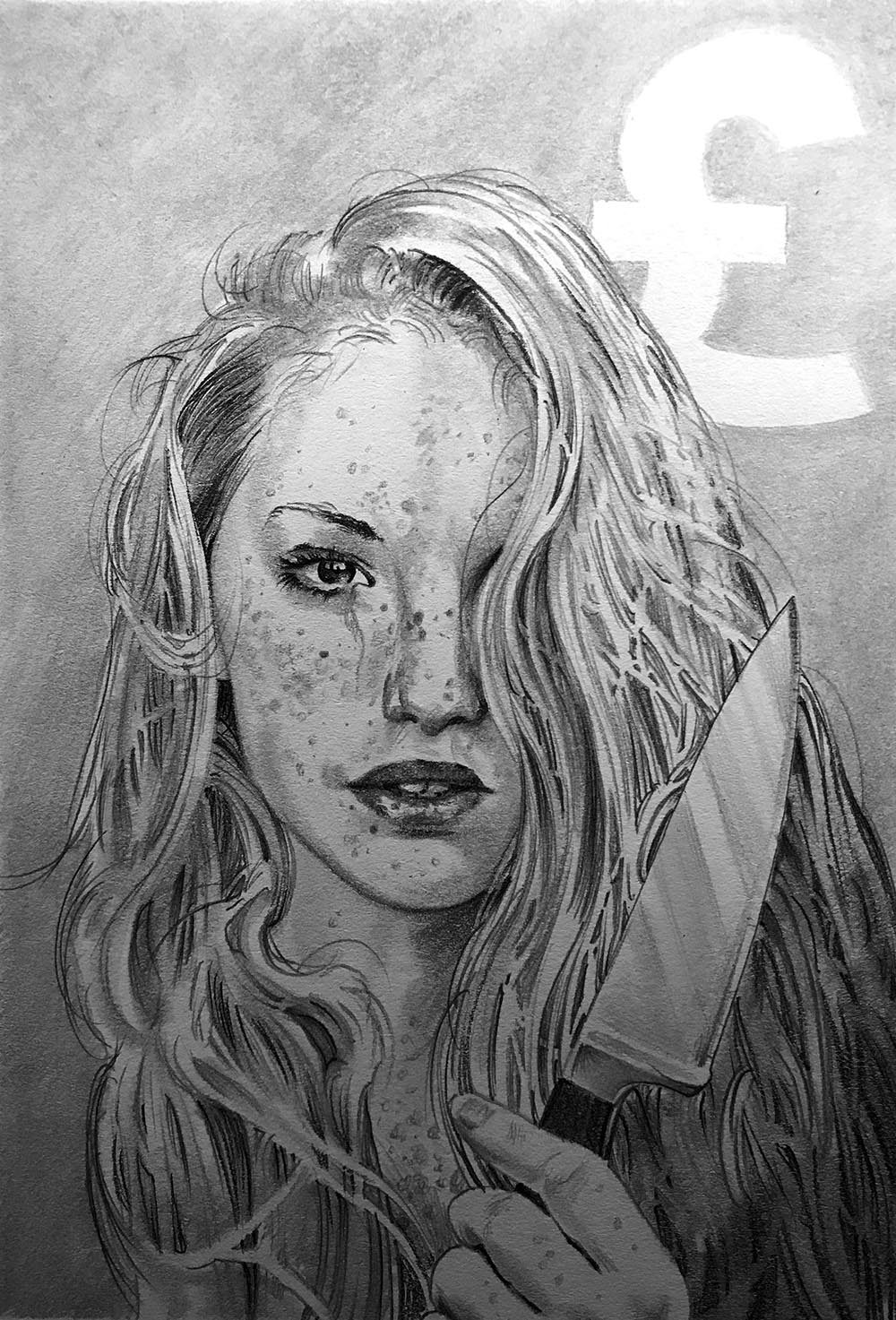 He hated it when they asked for money. She stood in the yellow light of the late-night street and looked at him in desperation. Her eyes glistened.

“They kicked me out without even asking how I’d get home.”

He looked past her, at the cracked paving stones that led to his apartment building. The heating would be on by now.

“Where have you come from?” he asked.

“The Royal London. I was in there overnight but they’ve put me out on the street.”

He nodded, then reached up and scratched his chin. The shadow of his nose fell across it like a sundial: time to go home?

“They kicked me out with no money. Can you help me? I only want to get home.”

There were tears now, shining softly on either side of her nose. A pale face with freckles and a mouth turned down at the corners.

He paused, and a voice said, they’re good at it you know, don’t fall for it. He saw his father sitting at the end of the family table, dispensing the wisdom of kings from a suburban dining room.

The girl wore a hospital smock and undershirt, her bare legs incongruous in the cold, a contrast to the skinny jeans and suit trousers of the sporadic commuters leaving the station. A woman looked over her shoulder and quickened her pace. He thought of following her example, but something – some charitable instinct perhaps? – something held him there.

“Where do you need to get to?” he asked at last.

“I might be able to help you,” he said, and reached into his pocket. He had some change and it was really no trouble to give her a couple of pounds to keep her moving. If standing around in a hospital gown on Whitechapel Road in winter was a ruse to get a couple of quid, then it was a lousy way to make money.

He placed the coins in her hand and they shone in the streetlights. She looked down in disappointment.

“I need to get to Tunbridge Wells,” she said.

She ran her hand through her wiry brown hair. Her eyes met his and then looked away. The hospital tag around her wrist was dirty and frayed.

“I’ve only got a couple of pounds,” he said, “but it’ll get you to Charing Cross.”

He couldn’t be expected to pay a fare out of London for a complete stranger. Someone at the station would be able to help her if she was genuine.

She regarded him silently.

“Perhaps you could call someone at home – get them to pay your fare from Charing Cross?”

“I live alone,” she said. She continued to hold his gaze. Was that defiance? Or something else. It hardly seemed right to make his generosity a source of grievance. Anyway, he had an excuse.

“Look, I’ve really only got the coins in my wallet. I wish I could help you get all the way home, but I’m sure someone will…”

“There’s a cash machine,” she said, and pointed to the corner. They have elaborate schemes, these people, he heard his father’s voice again. But she was leading the way out of the bright lights of the tube station towards the darker corner of the street where a cash machine glowed dully from a hole in the wall. Her hospital gown billowed like a foreign flag as he began to follow her along the pavement.

“You live round here, then?” she asked.

“Yes,” he replied, “up the way,” and he indicated the general direction of his apartment building, down the street towards the hospital from which she had supposedly come. He thought of lounge in his apartment and wondered why he wasn’t sitting comfortably on the couch with a glass of wine. He sighed and his breath formed a ghostly cloud in the cold air.

“Busy round here. And no-one stops to talk to you,” she said.

“It’s an interesting place to live, and close to the City, which is…”

She’d stopped in front of the machine and was pointing helpfully at the card slot.

“Could you get me twenty quid, please?”

Just this once, he thought. No fun being stuck out here in a hospital gown, beggar or not.

He raised his card to the slot but then noticed a flashing message on the screen: Sorry, this machine is out of order.

She scanned the street.

“There’s another one over there,” she said, pointing vaguely further down the road.

Don’t get taken for a ride, boy, said the voice in his head. But he disregarded it. He was a kinder man than his father, and hated the thought of transferring that man’s cold and miserly attitude to someone in need.

She led him down a side street popular with Jack the Ripper tours during the day but largely deserted at night. And there, in the pooling yellow glow of the streetlights, she began to mug him.

“Alright, mister. I want your wallet and your phone. Now.”

“But the cash machine is just there,” he said, not yet fully understanding how their roles had shifted. The jaundiced gleam of a knife made the change explicit.

He felt a rising pressure in his throat, as though he were about to be sick, but he fought it and tried to remain calm.

“Okay,” he said, “you know I don’t have any money on me. So if you’ll just let me get to the machine I can get your money for the train.”

“To Tunbridge Wells,” he reminded her.

“I’m planning a longer trip now mate. So you’d best give me your wallet and your pin number.”

She was no longer the pitiable waif abandoned by the public health system, and the hospital smock now resembled a butcher’s apron.

Robert Metcalf is a writer from Wellington, New Zealand. His short stories have previously appeared in JAAM, Takahe and Headland. He was the writer in residence at the Kerouac House in Orlando, Florida, during the winter of 2014/15.