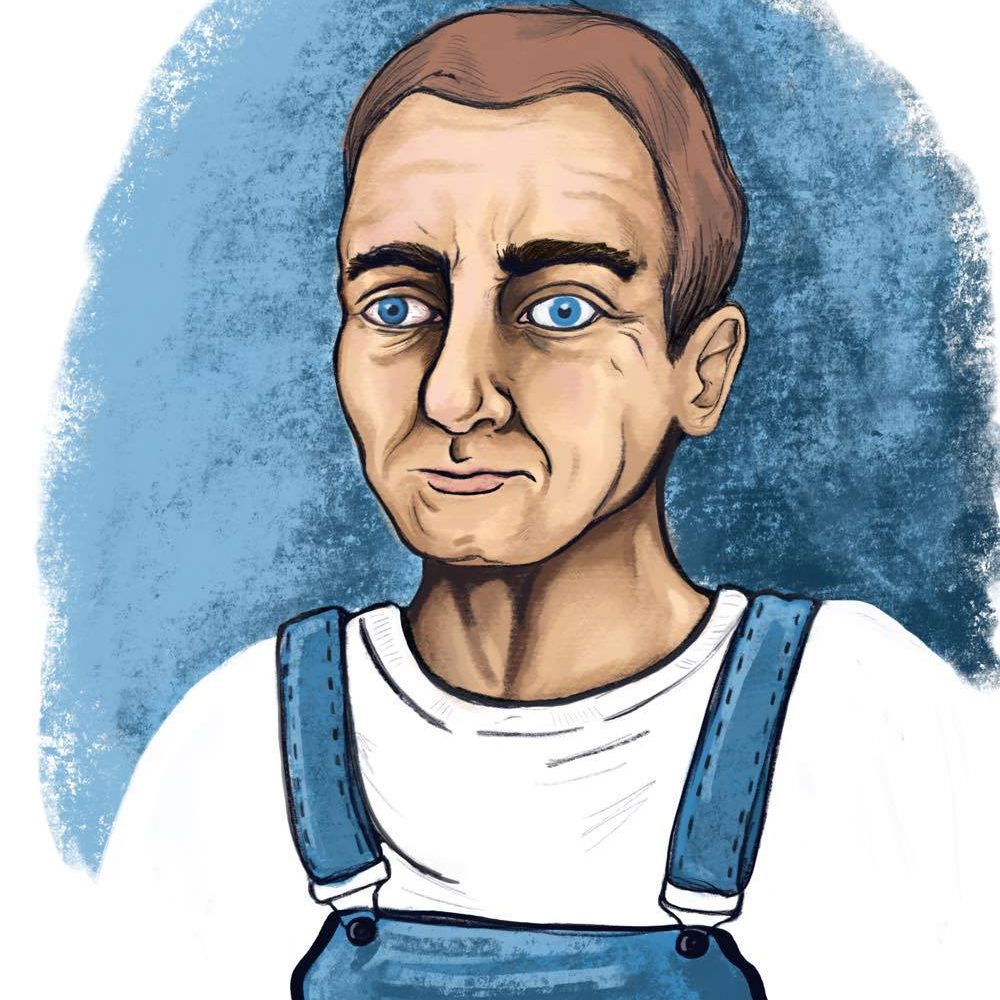 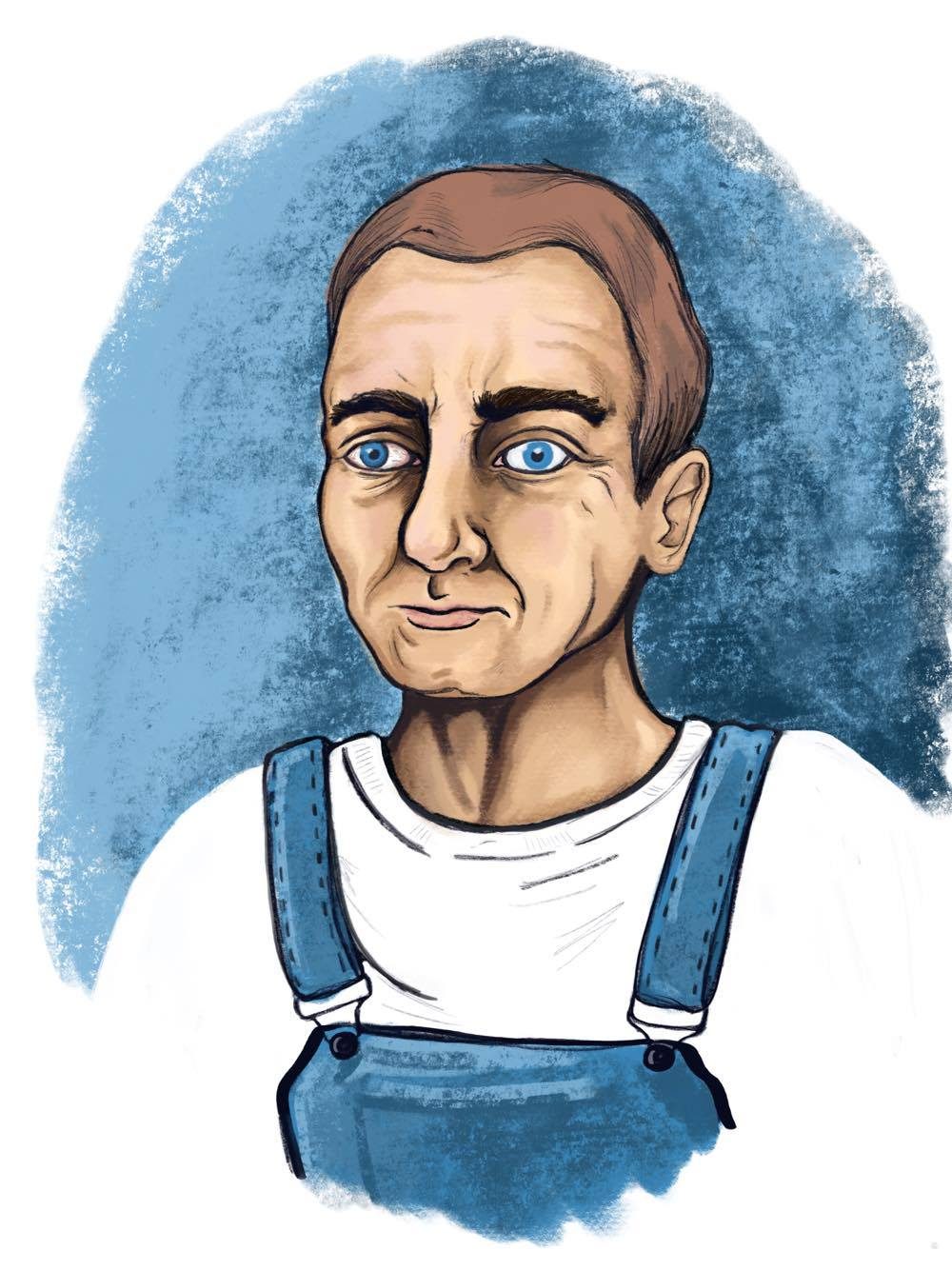 Big Martin had a glass eye to replace the one lost at a honk-a-tonk during his twenties. The pure blue of his glass eye matched his other live iris, but the unnatural whiteness of the sclera struck children silent. Missing were the red squiggling of age, the clouding of cataracts. The black pupil embedded in blue was as sharp as a little girl’s, as round as the end of a pin. Furthermore, the glass eye was fixed steadfastly in Big Martin’s face, never to avert its gaze from a miscreant brat, a saucy teenager, or an unwitting adult. Big Martin knew country folk as well as he knew farms and their animals. He knew the grieving mother, the prolapsed uterus. He eschewed formal training, even elementary schooling for that matter, but he was our doctor.

We called him over when our quarter horse threw twins, too early, before her milk came in. Only one foal survived the birth, a rarity in itself; the other started to fade without sustenance. Big Martin told me to milk the mare, but to catch the colostrum. How uncanny to milk a horse, in lieu of a cow or goat—her empty teats flat and long, more like labia than life-giving breasts. I spilled the colostrum trying to feed it to the baby from a shallow bowl. The foal sucked at the useless bowl and then licked my sticky hands. Big Martin shook his head around his fixed eye, admonishing me in the indecipherable language of the hill country. In my own latent ignorance, I had previously considered this language an indication of ignorance, or necessary convenience, like a flannel jacket or a muddy work boot. I learned the truth eventually, but perhaps too soon, too early, for me to make real use of its clarity.

Country folk had an interest in the intellect, but that of natural intellect—the cycle of life; the seasons of servitude; the quotidian routines of work and rest, of work as play and rest as play. An endless giving, it seemed, but not a sacrifice of positivity: a drudgery born of ironic beauty. Big Martin was an ugly man with ugly manners, but he understood the implications of our world. He grumbled and spat chaw juice, farted indulgently into his dungarees without compunction.

“Good for the fiber,” he always said.

The fiber of the gut, or the soul? I wanted to ask.

Once Little Martin helped us with a project then came into the kitchen for a hot lunch. I served tomato soup and tuna fish sandwiches on wheat berry bread. Little Martin had both eyes and subsequently less presence than his father. As I swiped crumbs from the table after the meal, Little Martin said, with deliberate nonchalance, “You’ll make a good little wifey, one day.”

“Fuck that,” I wanted to shout, but I just glared at him sideways, trying to mimic Big Martin’s glassy death stare.

Little Martin seemed unperturbed, but he let the screen door slam behind him.

I watched him leave the porch in the direction of the barn, feeling guilty. I called out, “Thanks for helping build the new turkey coop!”

Little Martin only threw a hand up over his head and walked on.

Big Martin might have turned around, given me a lecture about gratitude in a long look. Taught me to take a compliment with ease, with the graceless grace of the country folk, its depth of feeling encased in the loss of the eye, the loss of the precarious one—be it mare, mother, wife; foal, father, friend. He knew my loss like his own, knew all it atrophied from my innards to live as a simple working country girl, who must one day by her very nature be in need of a husband to hold and scold her like a child. Big Martin had had a wife and at least a dozen born children, some with other women who still snooped around for money around the holidays.

“They pay me in spices,” I overheard Big Martin tell my father. They were talking over the summer’s hay crop in the loft; I’d snuck into the goat’s pen below to eavesdrop, their voices leaking through the cracks in the planked flooring. My father laughed but didn’t press for details, though Big Martin would have given them, gladly.

Could he wink that glass eye? I wondered.

Courtney Harler is currently pursuing an MFA in Creative Writing from Sierra Nevada College. She also holds an MA in English Literature from Eastern Washington University. She attended Bread Loaf 2016. Her work has appeared in Northwest Boulevard, Neon Dreams, The Vignette Review, Blue Monday Review, Chicago Literati, From the Depths, and The Normal School. Her work is forthcoming in Palaver, Sierra Nevada Review, and Far Off Places. Courtney’s flash story, “Wild Turkeys,” has been nominated for a 2017 Pushcart Prize.

Amanda Farrell was born and raised in coastal Florida. She graduated with a b.f.a. In printmaking and drawing from the university of central florida in 2007. Her work mainly reflects her interest in the human form and Lepidoptera, creating portraits of people and winged things in various mediums.