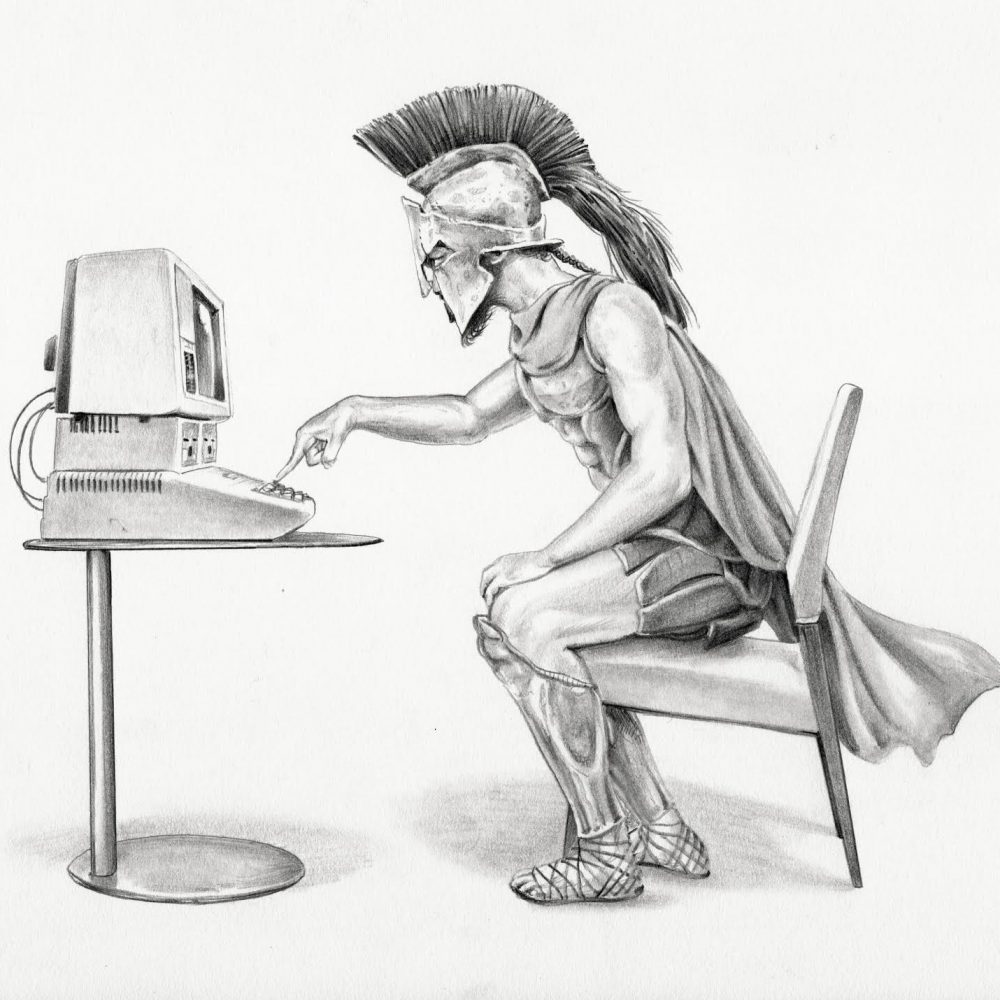 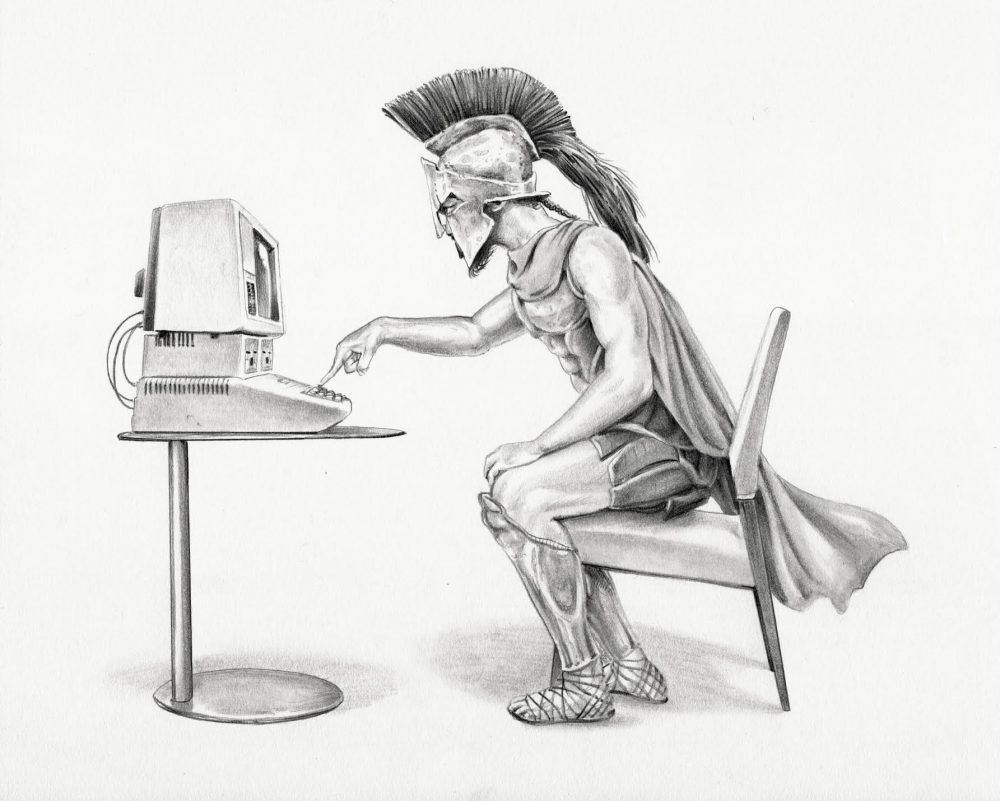 The last time any of us saw Frankie Mazzie alive was on the evening news. Well, not on the news, exactly—more like around it. He was there every commercial break, on a low-budget camera in front of a blue background like it was picture day.

A couple of teeth missing. Circles under his eyes like the dark grimy halo below a fridge, just peeking out when you open the door.

The last time anyone saw him in real life, he looked a lot better. That was in Homeroom during free time. We were sitting in the back of the class—him and me and Lee Durban—on the three big, gray computers that huff and whir like there are animals caged inside.

“What the fuck are you writing, Dustbin,” Lee said with no question mark. Mr. McKay had stepped outside to lecture some girls about using nail polish in class. The room still smelled.

I pretended to be finishing a sentence to give myself time to assess the situation. Walk softly and carry a big stick, my dad says. I get nervous when someone like Lee messes with me, because the only advantage I have in a fight is the element of surprise. Though to be honest the only real fight I’ve been in was when an eighth grader sat on me while I was tying my shoe, and I stood up and he flipped over and everyone acted like I was tough.

Frankie swiveled to face me. He always had this sort of dead expression, but it was happy, too, like he understood what Mr. McKay called transience. He didn’t even care if people made fun of him, just looked kind of bored and eventually changed the subject.

He slapped my arm with the back of his hand. His knuckles were scrapped up. “Yo, Dustin,” he said, “check it out.”

On Frankie’s screen were the words B U D D H I S M. Each letter was a different font and color.

Frankie stared at me for a minute and then started laughing. He reached around me to punch Lee in the arm, almost falling out of his chair.

“He assigned us his favorite,” Frankie said. Mr. McKay, who looked like a greaser with a white mustache, had given each group a religion to research. Each group was also named after a Greek city-state, and we were grouped into them based on what he called our aptitudes. I was in Athens. Frankie was in Sparta. Lee was in one of the other ones. Athens had recently fallen in Olympics points because Tommy Lingbloom had kept making marks on my paper and I broke his mechanical pencil and threw it across the classroom. So Mr. McKay had taken Buddhism away from Athens and given it to Sparta.

“I’m in charge of the title page,” Frankie said.

I gave an appraising nod, like I was on a daytime cop drama saying, “Nice set up. There a pension with that?”

The bell rang. I wiped my hands, sweaty because Lee was still breathing down my neck.

I’d written about half a page of the short story Mr. McKay was letting me do to make up for breaking Tommy’s pencil. I emailed the story to myself, waiting for the little swooshing sound like Hermes tucking it in his sandal and flying off to Olympus. Then I hurried out of the room into the dusty sunlight. I didn’t look back at all.

After that, Frankie wasn’t in school. Athens got ahead again. And then Frankie was around the news, talking about meth, some kind of public service announcement.

Mom was sleeping on the couch when I saw him. “That guy goes to our school,” I whispered to Allie, who was doing math on the floor next to me. The shades were drawn against the sun and the room was filled with blue TV light. Frankie’s voice sounded like static, like branches scraping the tin sides of the trailer.

I offered to help her with math, which annoyed her because she’s good at math. Somehow I always forgot that it did that.

That night was warm, like it was already summer. After mom went to the hospital, I slept out on the deck behind the trailer, my sleeping bag unzipped so that my legs could stick out. Listening to the wind, I dreamed that Mr. McKay was lecturing me again about fighting Tommy, telling me how disappointed he was in Athens.

When I woke, the wind was hot. There were screams coming from the forest. Human screams, rippling through a crowd the way screams do, like a current, when someone gets in a fight or sees something gross, so that, by the end, the people farthest from whatever is causing it are just screaming because of the scream’s momentum, because it’s taken on a life of its own.

I stood up. I didn’t move. And then the screams dried up and blew away.

On the ride to school the next morning, mom said it had been the sound of geese. “It’s eerie. I know what you mean.”

I liked how she said that. “I know what you mean.” People don’t say that often enough, including her. I put my head on the window, thinking about my story, and the Greeks dividing themselves into city-states, and Frankie’s sign about Buddhism. Then I only watched the cedars. When I unfocused my eyes, they lost all shape, and I could let them rinse past me like green and brown water, soundless.

Ryler Dustin’s poetry appears or is forthcoming in Iron Horse, New South, Portland Review and elsewhere. He holds an MFA from the University of Houston and is a PhD candidate at the University of Nebraska—Lincoln, where he edits Prairie Schooner. He has performed on the final stage of the Individual World Poetry Slam and his book, Heavy Lead Birdsong, is available from Write Bloody Publishing.