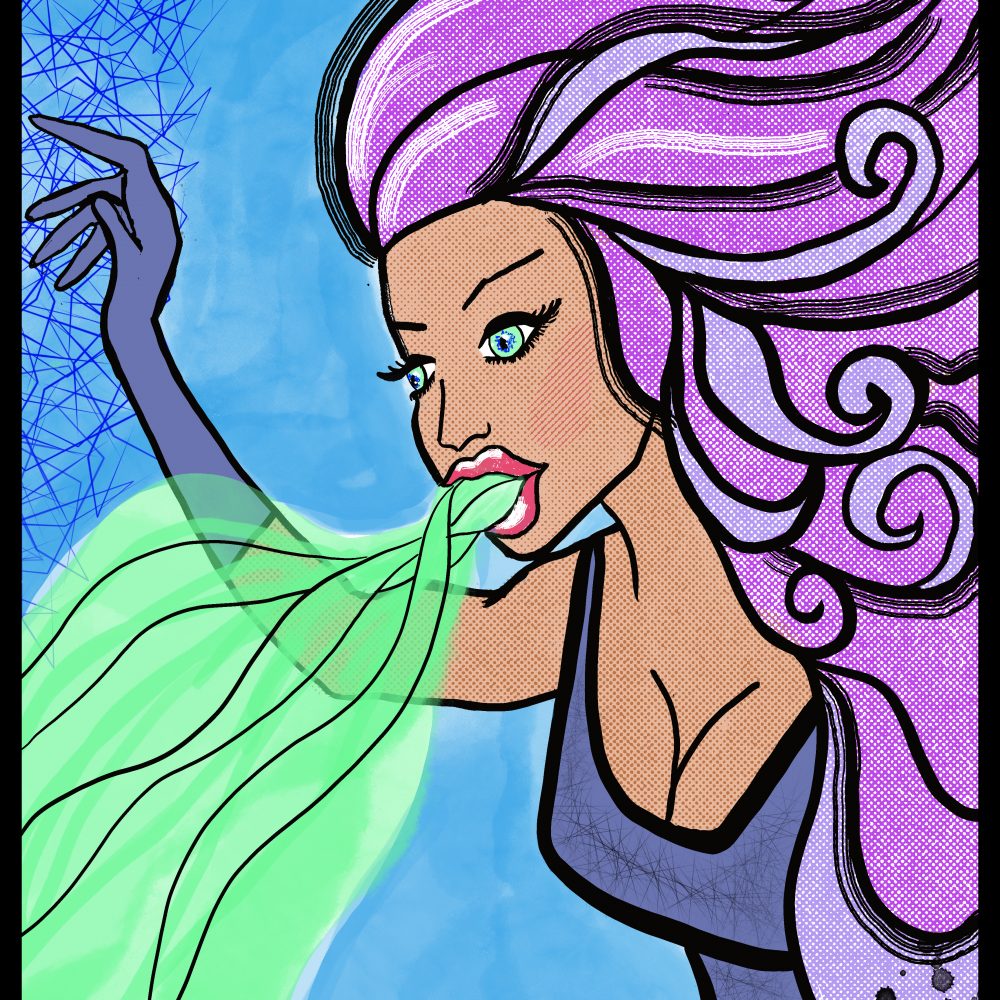 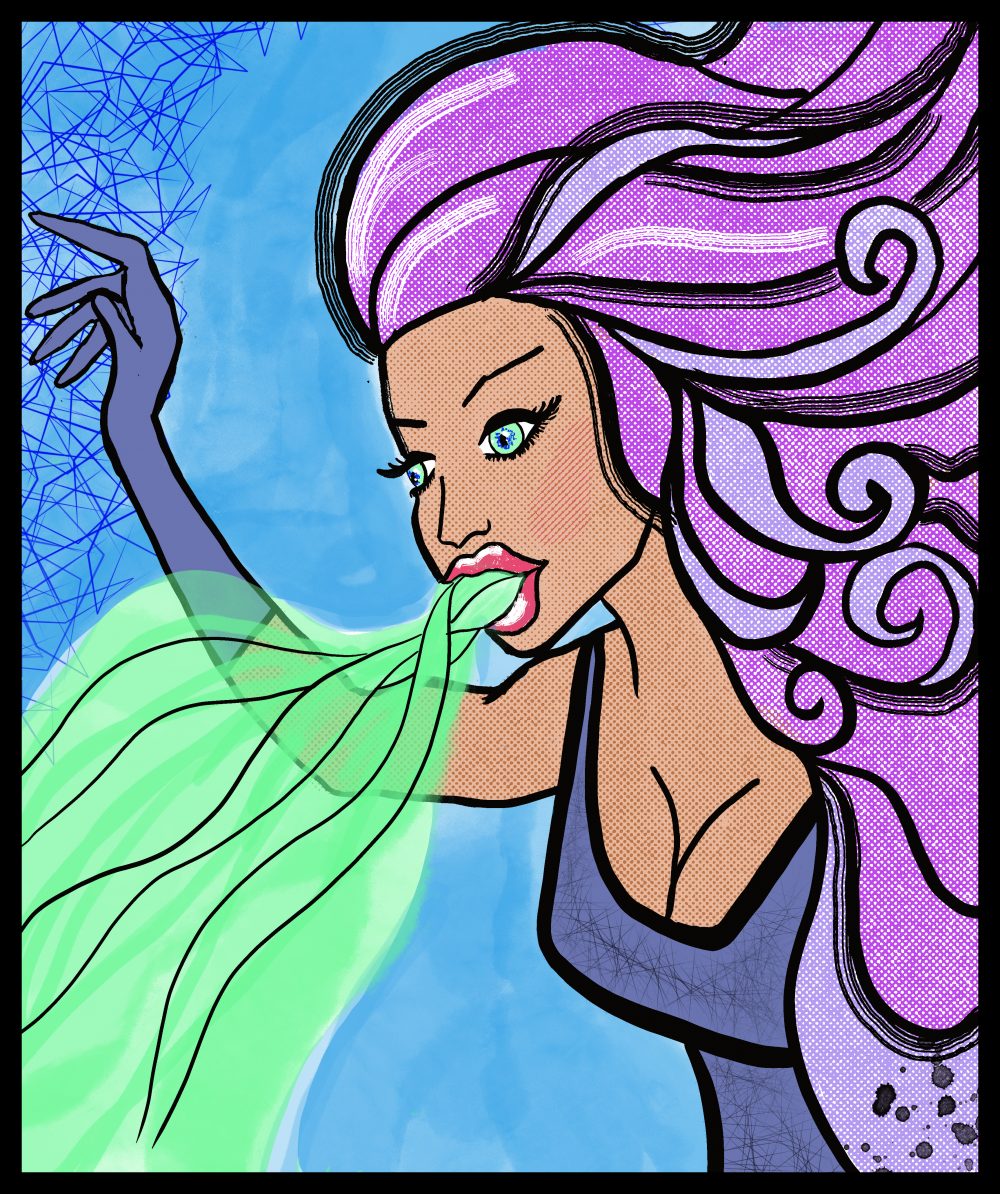 Her legs straddled him. Tiny hands to his chest, her small mouth to his, she wasted no time feeding off his nightmares. Giving dreams to men was her duty, but taking pain from this one was her birthright.

Healing sensations existed before men labeled her kind as nightmares and lunatics.

One of the first nameless ones rode on starbursts as dark clouds sprung up around her. She only visited men when the moon was a slither crescent, a near piece of nothing hidden into a bigger something.

Her horse felt like slick velvet over sandpaper under her fingers, coarse with age, wet with early morning dew. A natural ride coated in danger and purity.

Moistened air gathered on her chestnut skin and merged with the black coat between her thighs, no saddle between them. It was her Black goddess magic mixed with the celestial beast beneath her.

When she breathed power into her lungs so deep, she gave life to the witching hour.

She reached her favorite human’s cottage with her skin night-ridden and strength-soaked. Her horse stayed without reins, waiting for her command.

She savored the longing that the man waited for her, a snippet of his dreams brought to daylight so he thought of her even when he didn’t remember their nights together.

Her feet climbed the wooden steps without her mind to guide them. Each upward stride brought back memories with him. She concentrated on the air rushing in and out of their lungs. Seconds liquefied into beats and flutters of hearts. Light and darkness gave perfection to the burn scars that made him whole for her. Permanent marks he received when his parents died and he remained, a product of their mixed love and hatred others had for it.

Moments with him fueled her, enforcing what she was by birth, but she didn’t fill his thoughts with fear-laced dreams like a true Mara was supposed to do. Not someone she wanted, someone she loved without having seen awake.

He slept on the bed, his body partially hidden by twisted sheets and dented pillows, a present unwrapped in haste. The soft glow from the barely-there moon gave a small outline around him as most of the room sang with shadows and shades of night.

She knelt over him, careful in her movements. He was a heavy sleeper, living death not roused by the nearby cackling jokes of coyotes or the midnight cries of owls. Still, she moved as if the slightest jerk of linen would startle him awake.

Dark fog seeped from her lips and danced between his. It clung to his tongue like a demon craving souls and crept its way into the dark recesses we all possess but ignore. She guided the invasive ride so it leached away his terrors, a dessert only he provided to feed her veins and satiate her insides.

Time melted as she fed off each image singed by flames of his past pains. All the while, she hoped her slight touch cooled his phantoms and left traces of her behind. In exchange for his nearness, she took the parts that made him toss and struggle. His terrors strengthened her, his fears made her limbs tingle and her muscles stretch.

She closed them off in a realm of her creation. Magic grew into a living beast with them inside of it.

She released the hold on him so he could see her and know she was the one who fought the flames tattooed under his skin.

“What are you?” he asked as his fingers traced her arm with reverence.

She had a different answer each time, knowing his memory would fade with the disappearance of her beast room.

Black magic leaked off her tongue as she licked her lips. “I’m the devourer of nightmares and giver of the same.”

He rested one hand on the wall behind her, while the other traced her clavicle. “The walls are breathing,” he said. His hand slid over the sleek texture of night with ease and moved along with its rise and fall.

She placed her hands over his so they both moved with each inhale and exhale. “Life begins and ends somewhere. Why not in the walls?”

He backed her into them so they flowed through her. “Is this how it ends?” he asked.

She traced his lips with her thumb and whispered, “What are we but the product of our end?”

Like her magic, his mouth wasn’t gentle. She craved his broken intensity. Roughness of his scarred skin against her supple flesh gave a rush only he provided.

Her body hummed alongside the vibrations of the walls that swallowed them. A dimension of sensation fed off their ecstasy. Its rawness scratched insides that never knew they had an itch.

When her nails dug into his scars, he moaned, and her connection to darkness exploded with a light that blinded them.

Her body sensed the intruding flames before they reached up and grabbed his ankles. Murky fire singed his pants as burning flesh filled the air. His screams muffled behind her kiss as she took away his brief memory. She called magic that existed before the fire, a time when night extinguished all light.

Back in the world that wasn’t hers, she absorbed his warmth along with the smell of fire-stroked oak on his neck before closing the link between them, her feminine magic invading his masculine barrier. His lips curved and his face relaxed as he sunk into a realm deeper than sleep. Looking at him that way only made her long to see him with his eyes open, to hear his conscious self whisper words for her to swallow whole. But she gave him the gift and lapped up his night frights, allowing him to dream of the woman he loved, the woman who wasn’t her.

Before she left, she kissed the tear trail along his cheek and bone. She understood his fire-laced dreams then. How humans carried pain as comfort.

Tamra Artelia Martin received her MFA in creative writing from the University of Central Florida. Her fiction and poetry have appeared in Stone Highway Review, 50-Word Stories, Scissors & Spackle, and additional publications. She teaches composition and literature at Seminole State College.