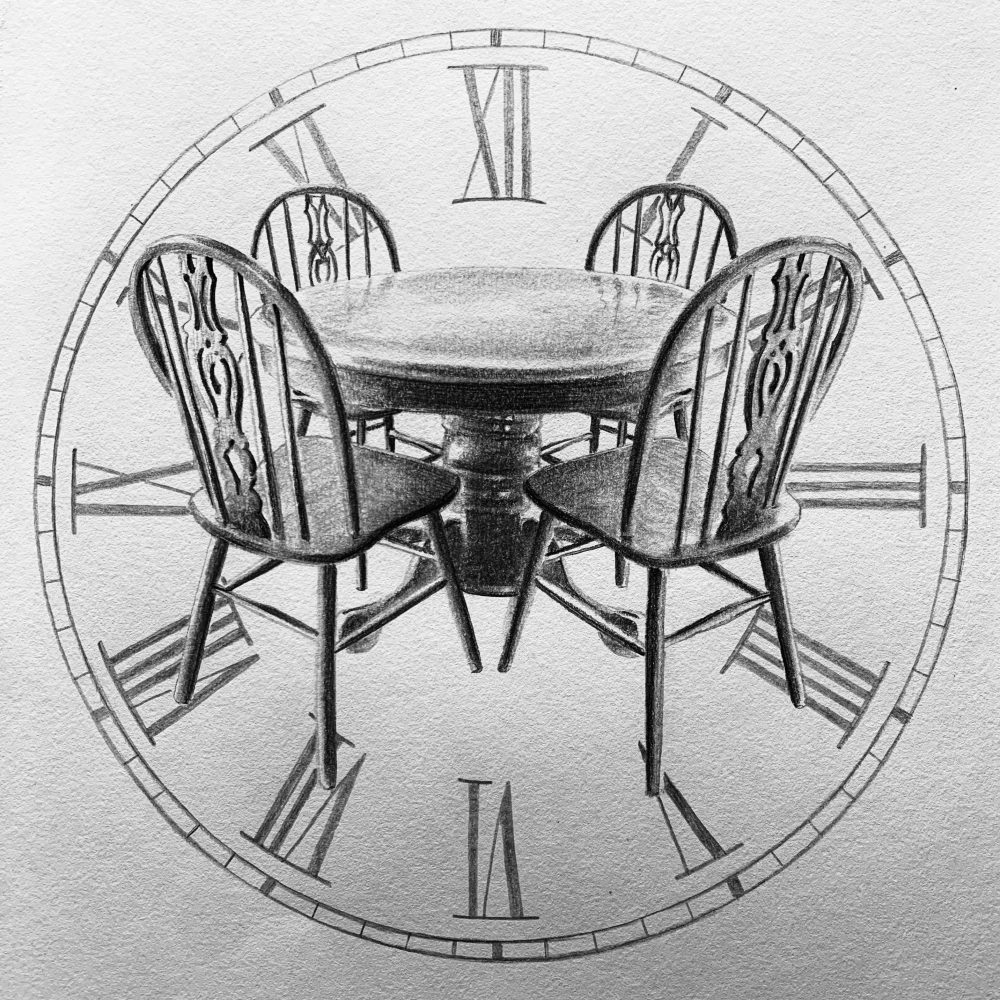 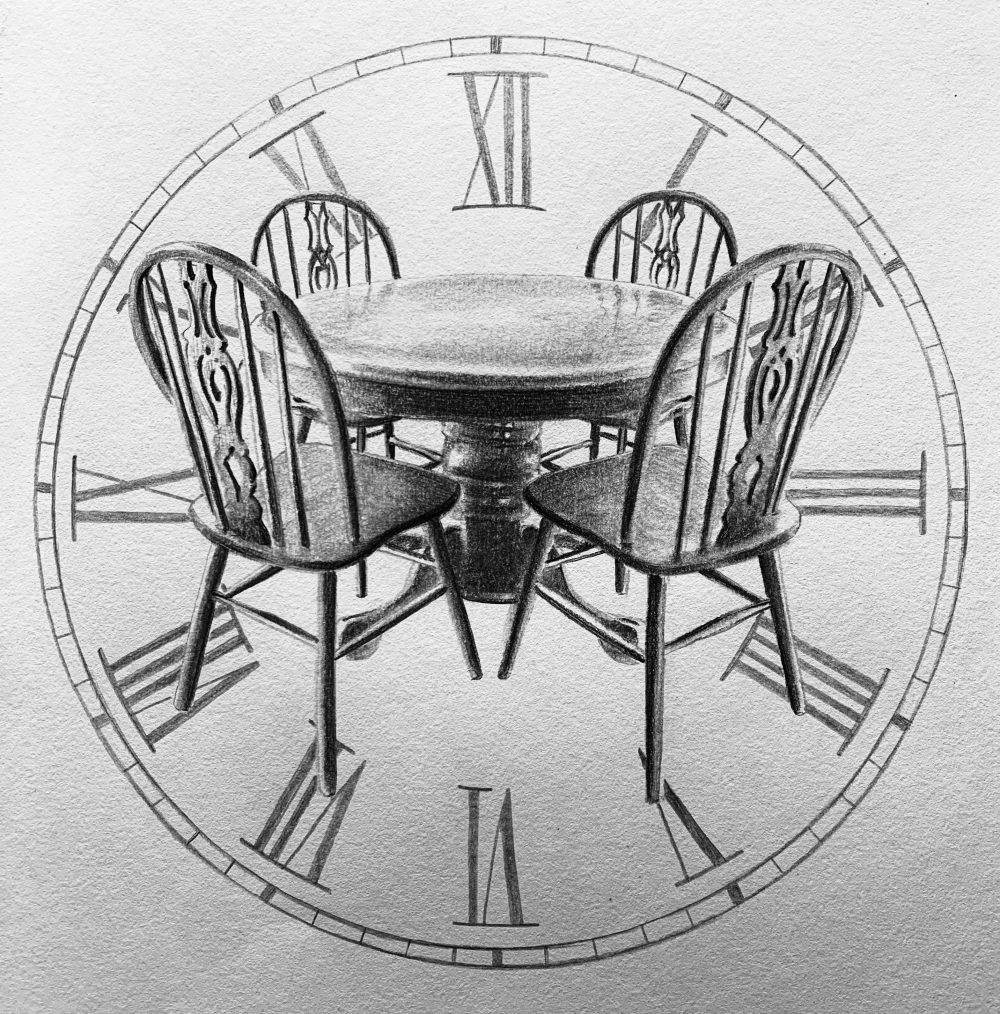 The Scott family had been going through a rough patch. Normally confined to the separate rooms in their three-bedroom house, Bill Scott had a wild idea: they’d have dinner and reconnect. He’d been seeing a therapist at his wife’s insistence due to his reoccurring outbursts. Tonight, Bill was optimistic.

His wife, Cynthia, had baked a delicious ham. Their children, Zach and Phoebe, sat in front of their hearty plates. Bill stood up from the head of the table and offered a toast.

“I’m thrilled to share this delicious meal together,” he began, ensuring that he bestowed most of the credit upon Cindy. “Let us revere this moment as a family.”

Cynthia and Zach half-heartedly toasted in unison with Bill. Eating commenced, with forks scraping against their plates as they feasted in awkward silence for several minutes.

“So, Zach… it’s come to our attention that you quit your job at the golf club.” Bill cleared his throat to no response and pressed the issue further. “Being a caddy is nothing to be ashamed of.”

Zach jabbed a slice of ham into his mouth and chuckled. “Not to worry, pops, I’m retired.”

“It’s time to hang up my laurels and enjoy the simpler things in life.”

“You’re twenty-years-old and live at home. What kind of retirement are you expecting?”

“I thought of taking up gardening,” Zach said. “I don’t want to work anymore. Life’s too short.”

Phoebe dropped her phone in anger and brushed her dark, shoulder-length hair to the side. “I’m dying, Dad. Haven’t you noticed??”

Cynthia cut in with her best smile. “Nonsense, Phoebe. Why would you say such things?”

Phoebe tossed her fork aside next to her phone. “Can’t you see what’s happening to me? I’m fading away… wasting away to nothing.” As a social media addict, Phoebe was quite literally fading away from her lack of updates. She had been suffering from “acute social media withdrawal.” The less she posted, the more she would slowly die.

Bill changed subjects and looked to his wife. “How was your day, dear?” he asked.

“You know damn well how my day went, Bill. I looked at the calendar and saw that it was July the fifth instead of the sixth, just like the day before, when it was the third instead of the fourth.”

Their nervous daughter twitched and gasped as her eyes fluttered. She then grabbed her cell phone with blurred hands and vigorously typed away.

Cynthia had a point. Both her and Bill lived each day backwards. Newspaper headlines, calendar updates, and everything else were all lost in a baffling time warp. They were moving back, regressing and subsequently aging each day. It all began one New Year’s Eve, when the clock struck midnight in 1999. After awaking from a wild party with friends down the street, they saw that they, and only them, were living in 1998. Bill blamed Cynthia for everything.

“You did this!” Bill shouted.

“How the hell do you figure that?” Cynthia snapped back.

“You complained constantly about time. A week from your birthday, I remember. You said you wished it would slow down. And what a coincidence that a day after your birthday wish, Voilà!”

“Are you listening to yourself? I wished for this, and it came true?” Cynthia said, tears welling in her eyes. “I wouldn’t wish this on my worst enemy.”

Zach groaned and rose, as his chair slid against the tile. “May I be excused?”

“Where do you think you’re going?” Bill asked, feeling his control of the evening waning.

“I don’t want to hear another time fight between you two,” Zach said. He slammed his palm onto the table. “Some retirement party!”

Bill threw his own empty plate across the room, shattering it against the wall. “That’s enough, you human parasite!”

Most unexpectedly, a bearded, bespectacled man stood up in the corner of the room and urged calm. “Let’s all take a nice, deep breath.”

Cynthia, Zach, and Phoebe peered at the man through the corner of their eyes. The tension in the room reached a fever-pitch that not even Dr. Gable could contend with.

Cynthia soon cut it, glaring at Bill. “What is your therapist doing here?”

Bill stumbled on his words for an answer. “I… he… What’s best for this family, is…”

Phoebe again reached for her phone, only to fade away completely. Cynthia gasped in horror as Bill attempted to explain himself.

“I told all of you that we’ve been under observation for weeks now,” he slowed down and took a deep breath. “If you all weren’t so self-absorbed and lost in your own nonsense, you’d remembered that we had all agreed to this.”

“Me neither,” Cynthia added.

Phoebe was nowhere to be seen.

“Please,” Dr. Gable said, scratching the top of his bald head. “Let’s all try to get along.”

They resumed their meal as though nothing had happened. Bill and Cynthia then glanced at a clock on the wall, ticking backward with every subtle movement.