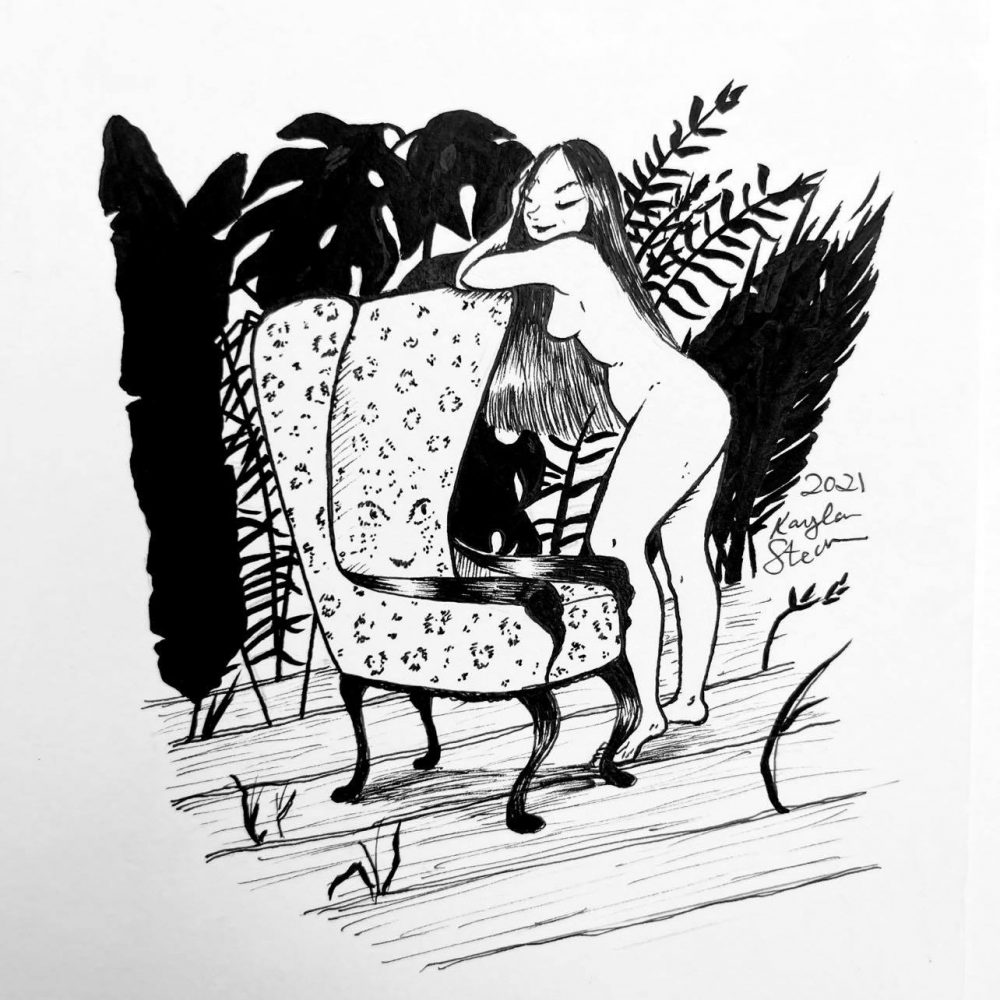 I can’t say precisely when I noticed the leopard-print wingback accent chair. I  assumed Kennedy bought it. We were in the “making it our own” phase, and one or the  other of us was always buying things. And then Kennedy showed me the potted artificial  palm she bought to accompany “my” leopard-print chair.

“Well, darling, it’s fine that you did. I wasn’t thinking of leopard here in this  room, but it goes nicely and this palm fits with it so well. See? It’s ok.”  And it was, I guess. Neither of us thought any more of it.

And I didn’t say anything right away when the round zebra-print ottoman  appeared. Nor did Kennedy. But when a light fixture resembling a brass monkey holding  a lantern turned up, we had to confront the issue. Namely, that we had invasive furniture.

We called the real estate agent together, putting him on speaker phone and, both  of us nervous, asked him who we ought to thank for the new furnishings, we hadn’t  known they’d come with the house, and did he or the previous owner still have a key?  Because while we appreciate it and all, we’d like to get our own things.  It was an unsatisfactory phone call.

Naturally we changed the locks.

We were relieved to the point of smugness when nothing new showed up for three  whole weeks. But we hadn’t checked the kitchen well enough, and there was a new set of  knives and a copper tea kettle neither of us would admit to purchasing.

Is she gaslighting me? I wondered, knowing full well she was thinking the same  thing about me. But was she? Had she gone mad? Was her brother playing a joke? Was  her mother doing that controlling thing she did?

We burned sage. Of course. Obviously.

The leopard-print wingback accent chair growled as we passed the smudge over  it. The zebra-print ottoman bucked at us. We didn’t have the nerve to approach the  knives, we just left the sage smoldering on a plate on the stove.

We slept, fitfully, in our unfurnished spare bedroom that night, curled around  each other on the floor. I heard, at one point, a sliding noise. “What’s that?” I said aloud,  hoping Kennedy would be awake. She was, but she wouldn’t answer.

“Go away!” I shouted, hoping I sounded like the master of the house, and threw my pillow at the door. A low growl answered. I spent the rest of the night with my head  cradled in my arms, afraid to retrieve the pillow.

The sun woke us, streaming in through the window in so normal a way, so joyful,  we felt quite silly. Invasive home furnishings, indeed. We’ll take the things to Goodwill, I  thought, even though they are good quality and well-made. Coffee, we said. We’ll know  what to do after coffee.

Kennedy shrieked when she opened the door. I was right behind her and couldn’t  see around her. I heard a growl, a bestial squeal, and then I pulled Kennedy back into the  room. I slammed the door shut, just noticing, as I did, a really fine quality dimensional

metal wall sculpture of an elephant I’m certain wasn’t there last night. I heard a chunk  chunk chunk hit the just-closed door and I know it was the new knives.  “This is really too much,” I said to Kennedy. “It’s one thing to have invasive  home furnishings, quite another for them to drive out the native species,” by which I  meant us, and also the things we’d bought. Like the West Elm couch, which, we could  see through a crack in the door, had been replaced by a snaky sectional, low to the ground  and sinuous.

She’s a brave woman, my wife. She can be pushed only so far. Despite my  remonstrations, she’s gone out there, into the living room, amidst the invasive furniture.  I’m sitting with my back to the far wall, listening to growls and whinnies and the sound a  giant serpent makes when it rubs against a closed door. I can hear Kennedy’s rich  laughter and when I peek through the old-fashioned keyhole, I see her, naked and  unashamed, in the jungle our living room has become, the Lady of the Beasts, with a  fawning leopard at her knees, and a zebra, with a serpent draped around her neck, its  tongue flickering at her breast, while I cringe here in khakis and wonder which of us had  gone mad.