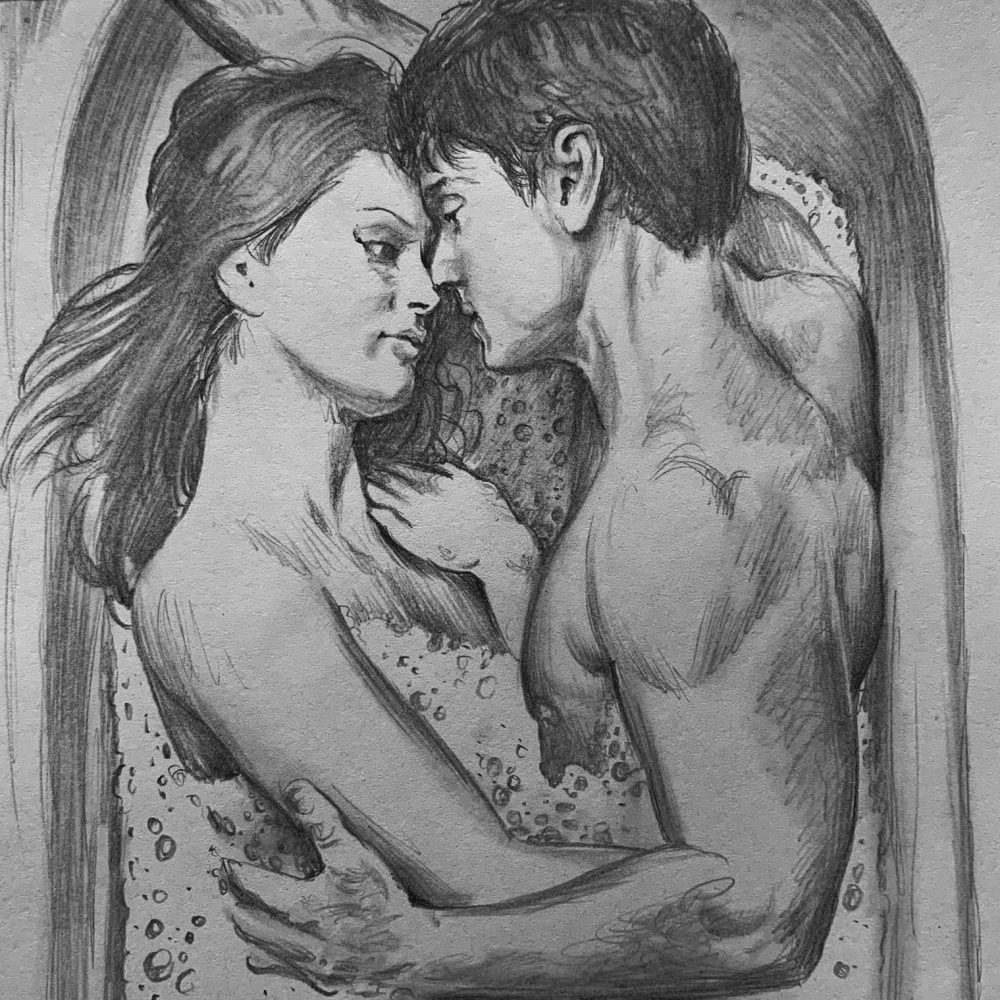 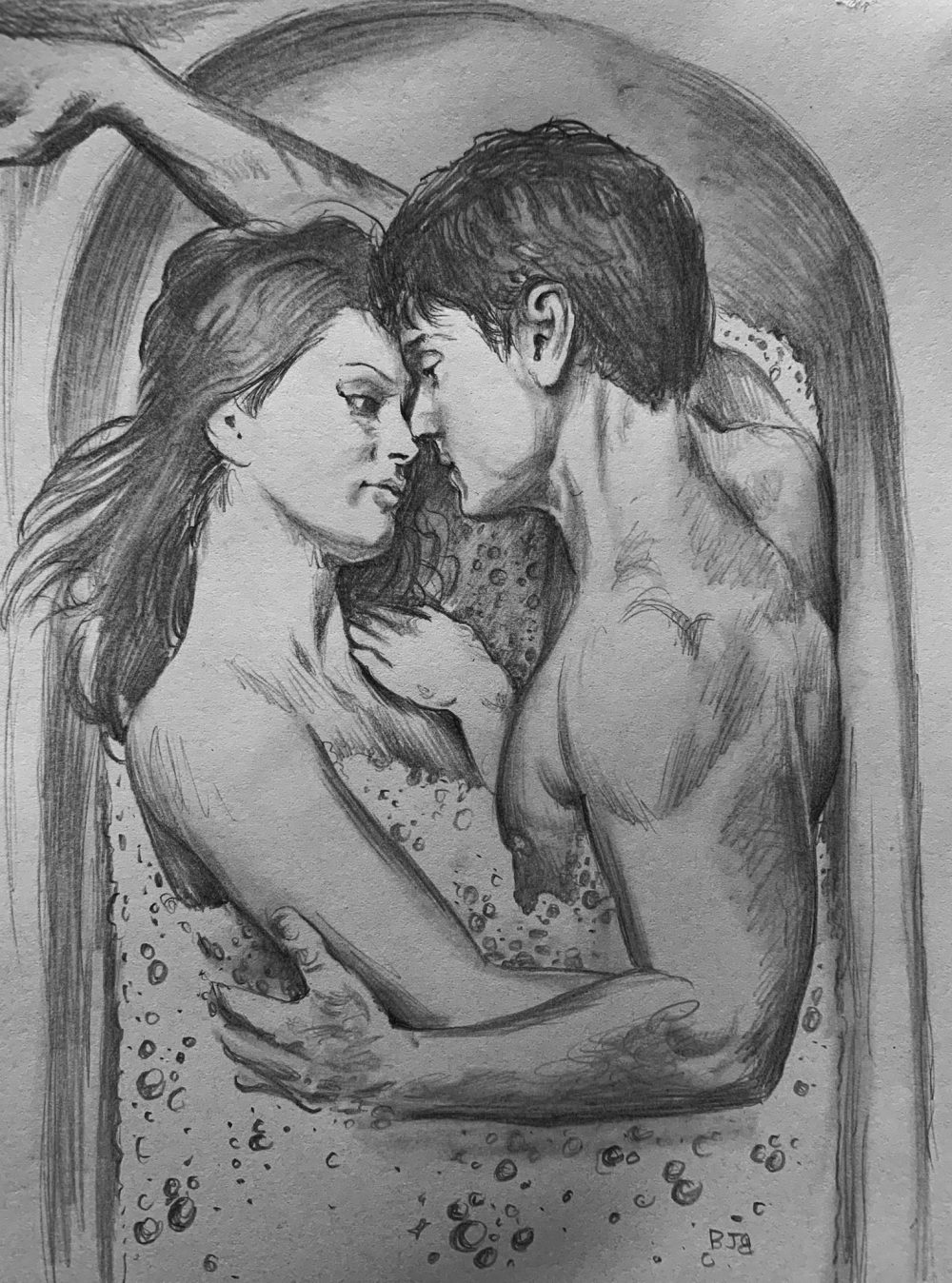 Old, crusted boots cast carelessly by the door. A blouse here, a pair of trousers there, socks, a woolen cap, and more: a trail of garments from the entryway, through the hall, and back to the jetted tub in the solarium. The wall-to-ceiling windows fogged with the heat from steaming bathwater. On the other side of the double-paned glass, fat snowflakes flurried down around the cabin and melted where they touched razor grass and palm trees warming in the morning sun.

The lovers laid bare on a canopied daybed beside the bath, entwined in each other’s curves. Dappled sunlight streaked through the room, casting mottled patterns on their skin–her’s bronzed from hours on deck; his warm and rich as dusk.

She watched the patterns shift on his chest as he took steady breaths. Though her eyelids were heavy from the long trek and warm reception, it had been too long since she’d seen him in the flesh.

She plucked a cube of cheese from the tray beside them and sought to extend her wakeful hours with him. “Tell me,” she said as she chewed, “what has occupied your time while the seasons turned?”

He stretched before answering, “Painting.”

She cocked an eyebrow at him. “Since when do you dabble in acrylics?”

A dimple on his cheek betrayed his amusement. He stood and pulled a nearby towel around his waist. “Come look,” he beckoned, and pulled open the door to the hall.

She wrapped herself in a bedsheet and followed.

Their bare feet padded through the cabin and up the spiral staircase to the loft.

“Almost done,” he said, gesturing to a scroll of heavy cloth he’d hung from the rafters.

She moved closer to inspect his work and found it to be a tapestry of her travels at sea—all painted with thread. Embroidered springtime wildflowers bloomed around a dusky hand reaching for an outbound ship. French knots punctuated the curls of clouds above the vessel sailing away. Variegated floss caught the changing hues of the sky and sea as he captured her traverse of the equator in summer amidst the Saharan dust. Brick stitches caught the brutal exchange of cargo in fall.

She turned to gape at him. “This must have taken forever.”

He scratched the nape of his neck. “Only as long as you were gone.”

She returned her gaze to the scroll and noticed back-stitched details in the foliage. Her fingertips traced over her own silhouette bent over a navigational chart. The candle-lit cake her fellow sailors smuggled aboard for her birthday. Her offshore excursion to the foreign pharmacy. The first mate pressing his ear against the door while she hid in the head. The tight curl she made with her body within her bunk clothes.

“How did you know?” she asked, keeping her eyes on the needlework.

He hugged her from behind. “Maybe I didn’t.”

She turned, and still holding the sheet tight around herself, searched his face. His dark eyes stayed open and wide while his eyebrows lightly furrowed with concern. His lips parted slightly, as if he were going to say something, before they closed again.

She looked down at her toes, calloused and cracked from the hard ship labor, and lifted a foot to trace the inner arch of one of his soft, silky feet with her toe.

“Winter is our only season,” she said finally. “We spend so much time apart.”

“Seasons turn,” he said, and lifted her chin, “and still I’m yours.”

She reached up to touch the side of his face with her palm. “Even knowing?” she asked.

“Especially so,” he replied. He planted a kiss on her palm and another on her wrist before asking, “If you’ll still have me?”

The morning sun shone through a window and caught dust flecks fluttering between them.

She let the bedsheet fall to her ankles.

She pulled his towel open and used it to press his hips tight against her own and kissed him hard before pulling him down to the floor on top of her.

They laid beneath his stitchwork, amid the bobbins of floss fabric scraps. Incomplete at the end of the scroll, sketched out in pencil but not yet stitched: her homecoming in winter, their bodies clasped in the jetted bath. In the bottom corner, held in place with a pin, hung a thin silver band embedded with a row of emeralds.