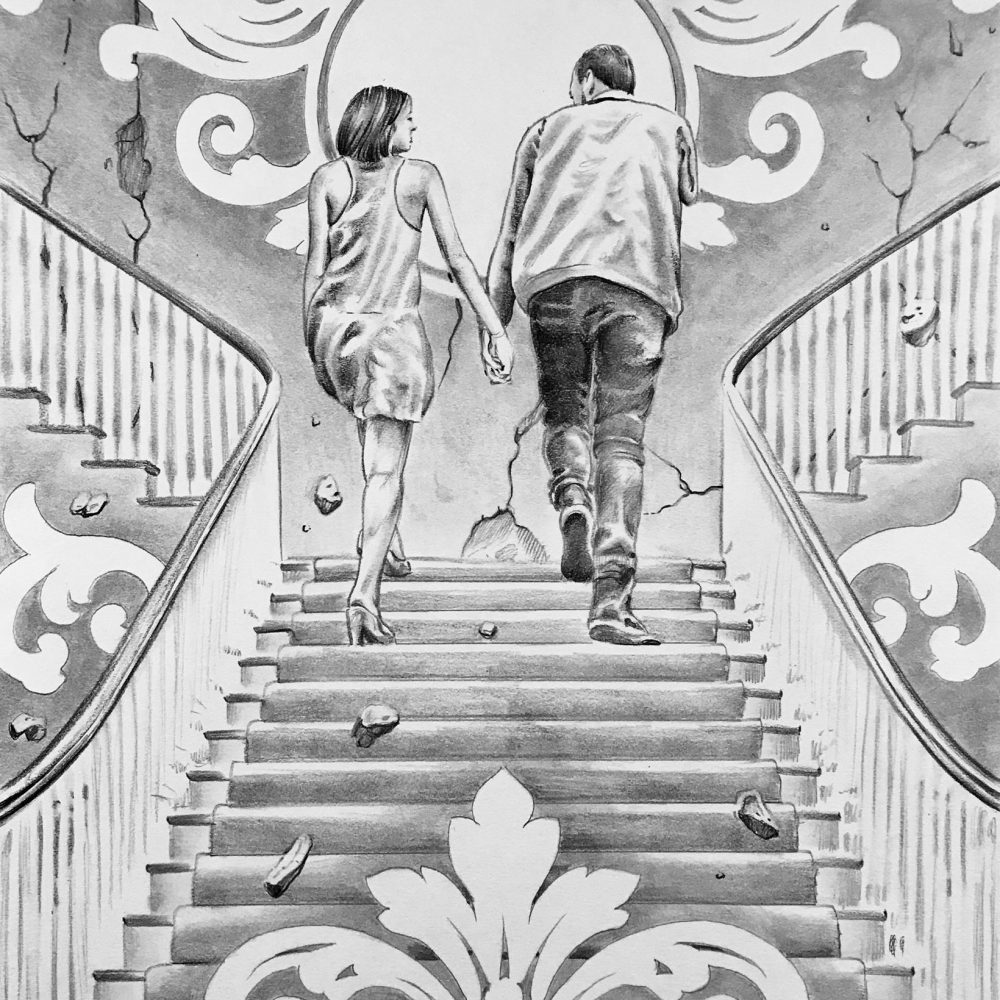 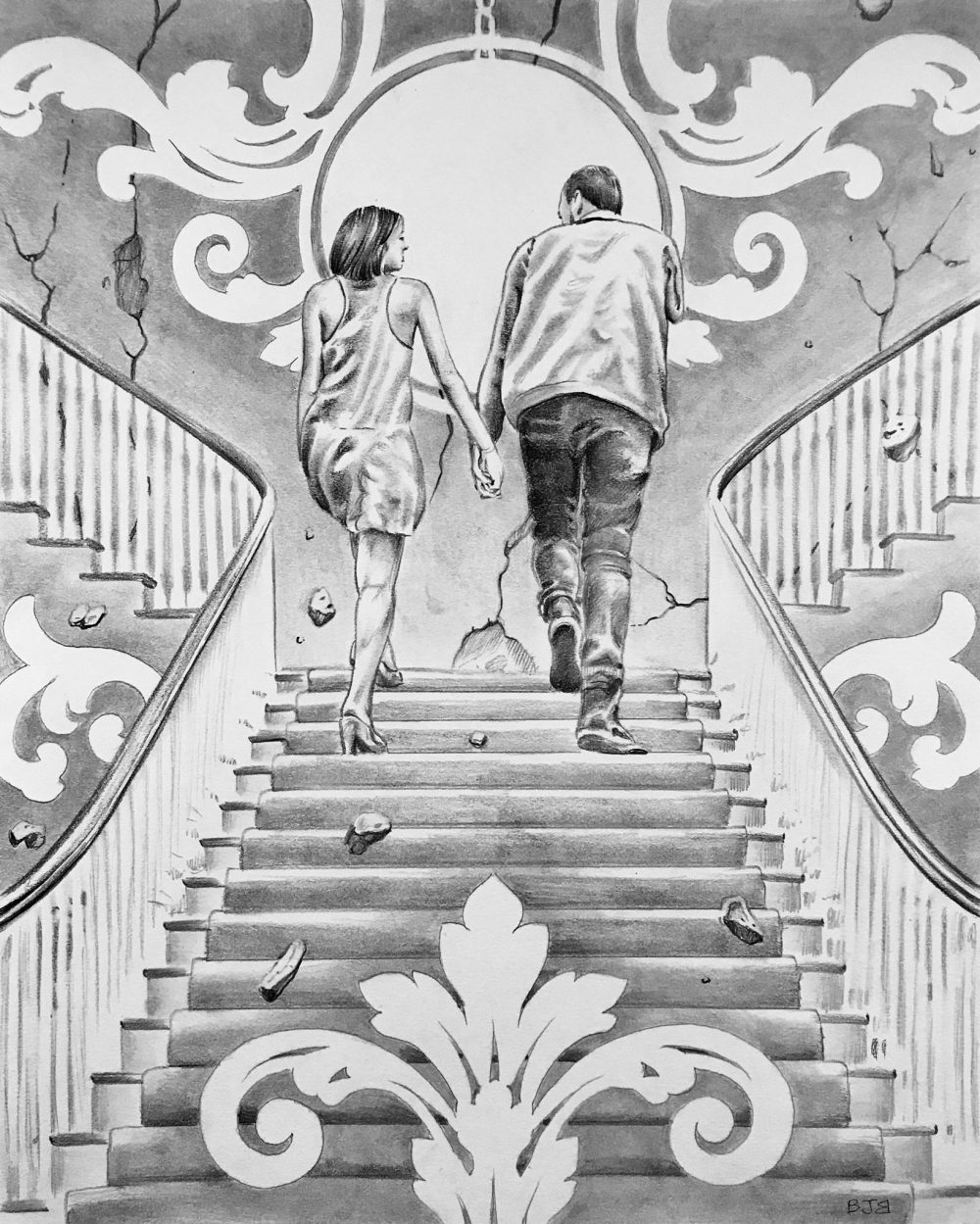 Mabel soaked her rag in paint thinner and dug into the grooves of the molding. The building groaned with pleasure. “Promise you’ll do Aggie next.”

Mabel smiled at St. Agnes’ spire out the window. “If they pay me.” She dipped her rag again, wrapped it around a knob and –like pulling wax from an ear– lifted away generations of latex and lead to reveal an intricate rosette. “Goodness, you’re handsome,” she said.

The building purred. “I was the finest ballroom in my day.”

“I’m sure you were.” Mabel opened her paint box and mixed a blushing ecru.

“Hold still, this might tickle.” Mabel sponged on the paint and blew. The windowpanes jittered. Mabel hopped off her ladder. “We’ll let that dry before we gild.”

“I only work for the realtor, but you’ll see. I’m going to make this rosette so perfect, they’ll have to restore you.”

“I’ve heard of them. They strip buildings for copper.”

“That’s already happened. These guys’ll fix you up. You’ll be an investment.”

“Then I’ll sit empty until I collapse like the Cushman Arms or the Allen. Or they’ll tear me down like the Tot Ballroom or—” A rumble knocked Mabel back. Glass crashed to the floor. The windowpanes shattered as the building cried, “Agnes!”

A funnel of debris rose up where the Saint Agnes’ Spire had just stood. The street wasn’t blocked off; it wasn’t demolition, but this was happening all over —old buildings collapsing. Experts blamed the new subway construction.

“No. Agnes knew what was coming. Strip and strike. I know it too! Investment! Ha! No one will ever dance in me again.”

“They’ll knock me for a high rise. I can’t stand it, I’m not going to wait around. I’m going to fall right now, I mean it. Get out Mabel. I’m going with Agnes.”

Plaster rained from the ceiling. Mabel froze. Something crashed in the hallway. “Stop shaking. They’ll be dances. I promise.” She thought of the veterans huddled where the band shell used to be, drinking grain alcohol. One with no arm.

“Yes. Only hold it together. Okay?” The shuddering quelled. The dust motes rearranged themselves like fog on a film set. Dreamscape. The ballroom was beautiful. “You must only make arrangements with their commanding officer.”

“You are a young lady with no escort. I feel responsible for you. Our boys are the best in the world, but men will be men.”

“I’ll be careful. Just, don’t fall down. I know the Oligarchs will restore you. You’re irreplaceable.”

“And you might try wearing a dress. You’re slatternly.”

There was nothing to it, really. Mabel spent five dollars on fifty pink copies at Fed-Ex. She left flyers at the front desks of yoga centers and on juice counters. She photographed one and for a group text.

She bought a bottle of Gordon’s Vodka, a jug of lemonade and a sleeve of paper cups. She donned an old dress with a good skirt and set off for the hard part.

It was simple really. You want Veterans to come a party? Ask them.

“Is it a fucking church?”

“No, it’s the De Palma Ball Room. It’s like a historical preservation thing, the building used to have Military Balls…”

“I got some balls for you!”

“It’s next to the church that fell down. and so… free booze?” Mabel passed out flyers, forcing a smile when the man missing an arm, who’d stayed quiet throughout, reached his good hand to her. “I’m Mabel.”

Mabel taped the last flyer to the door, propped it open with a piece of fallen plaster and went upstairs. This would work. She poured herself a drink, found some Shostakovich on her iPhone and danced in the pools of streetlight that poured through the broken glass. The music lifted her. She felt beautiful.

“This isn’t a party,” said the building.

“Just wait.” Mabel spun. The music ended. The ads came on. She rebooted. She drank more. She re-texted her flyer.

“No one’s coming,” said the building.

It started to snow. Mabel looked through the hole where the cathedral had been to the lighted windows of the next street. She called people and left voicemails. The flyer said free drinks, where were they?

“Lonely souls hear art and animals, “said the building. “Social people hear each other. You’d better go” And then as if speaking to someone else, it whispered, “Uncle.”

Mabel felt a tremor. She fled down the stairs. The door was closed, the plaster holding it open gone. But when she opened the door, Mabel found Kenneth curled over the grate, her pink flyer in his hand. It was enough.

She led him upstairs. She knew he wouldn’t dance and she didn’t have the nerve to ask him anyway, but he was a veteran brought in from the cold and that was something. He jerked his head back a little at the smell of turpentine, “Sniffing glue?”

Mabel made a bed of her drop cloth and replayed the Shostakovich while Kenneth faded to sleep, then she tiptoed away, like a mother leaving the nest, and went to find a bar where she could sit and not talk to anyone.

In the morning, Mabel read every article she could find about the collapse; none mentioned a body, but Kenneth wasn’t in the park and the rubble proved mute.