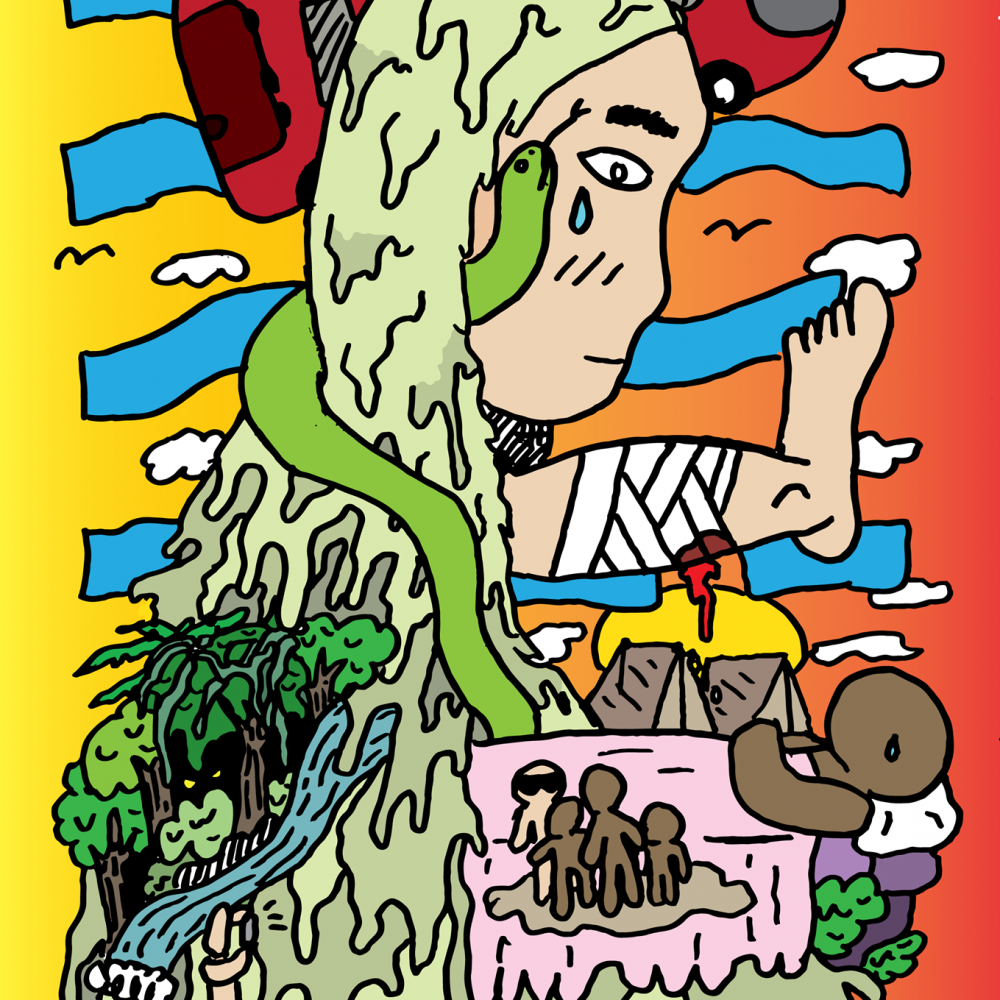 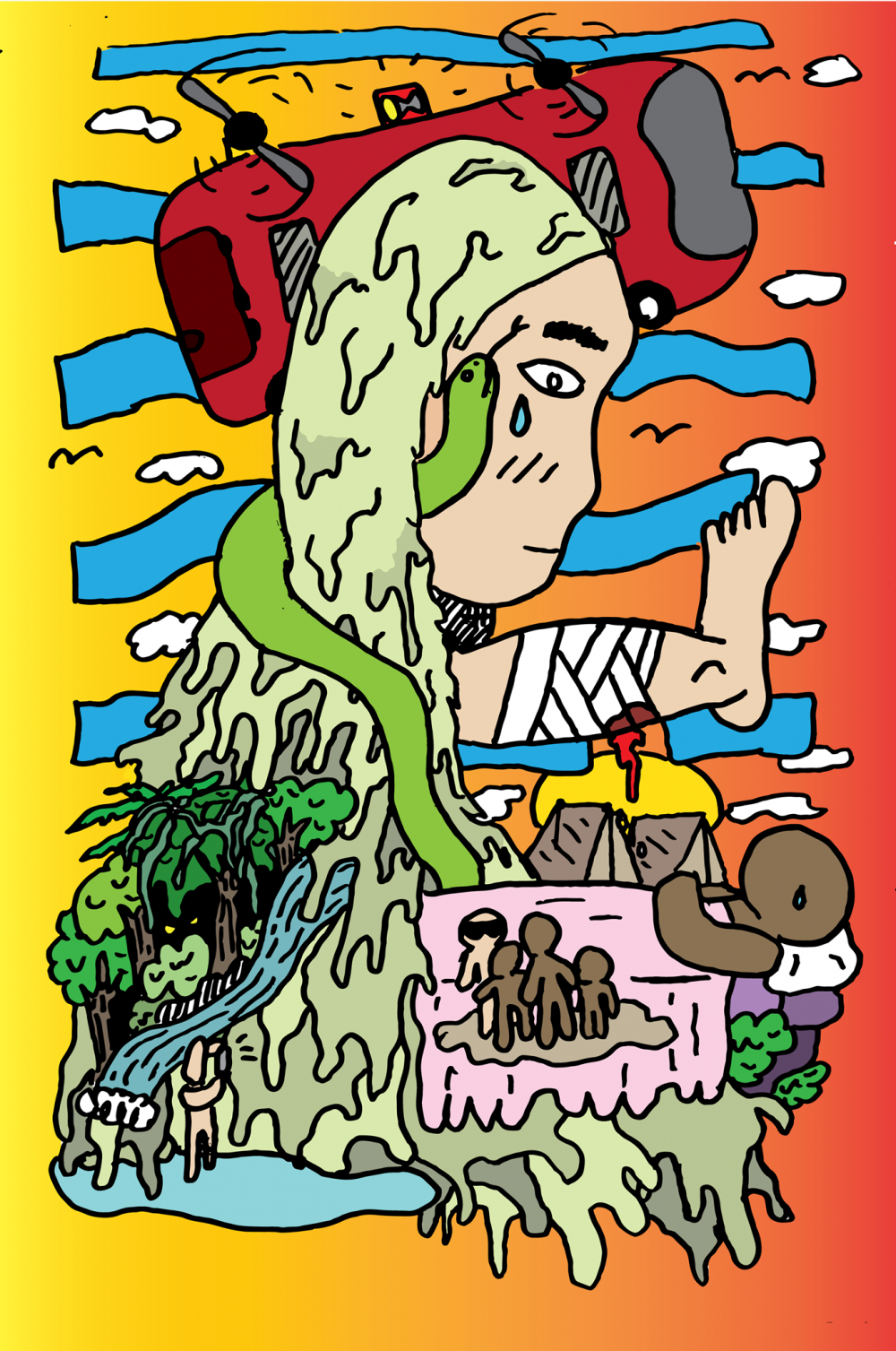 At first it didn’t hurt, really. A small prick, almost imperceptible, and two evenly spaced beads of blood that rolled down her shin unnoticed and dried on her dirty white socks. A sensation that was ignored almost as soon as it was registered, like the many small scratches and bruises one attains in life that are not noticed until they have already begun to heal.

But this was different, and it took two hours before Victoria noticed something was off. A slight shortness of breath, a tightness in her chest. A nagging soreness in one leg. Her first thought was anxiety. She had, after all, had a rough day. A five-mile hike through the Congolese jungle would make anyone anxious. And then seeing all those malnourished children withering away. The little girl with malaria. The annoying photographer who wanted her to pose with the sick children as if they were merely props.

“Is everything alright in there Vicky?” a voice broke in from behind her door. “Dinner is getting cold out here.”

It was Cedric, the local liaison who ran the jungle outpost where they were staying. He spoke with a thick French-Congo accent and had a voice like an opera singer.

“Coming,” Victoria shouted, throwing open the mosquito net as fast as she could.

As she stood up a sharp pain bounced across her chest. She let out an involuntary gasp, which only made the pain worse. But, as unexpectedly as it had come, the pain disappeared.

She walked slowly into the dining hall, which was just a small room with a few plastic tables and chairs spread about next to a buffet. But in the middle of the jungle these things were a luxury. A crackling lightbulb hung from the ceiling and cast deep shadows on the young people that had gathered to eat their dinners. They all spoke in loud, exuberant tones about the good they had done. Phones were passed around, everyone commenting on which pictures they were going to upload on Instagram.

Cedric was sitting alone at a small table in the corner, and Victoria walked towards him.

“Food looks good,” she said, pulling out a chair right next to Cedric. “Is this another French recipe?”

“This is a Congo meal,” he said with a wry smile, “But yes, it is of French origin.”

The food looked appetizing, but the smell made Victoria nauseous. When she stood up to get some water the room began to spin, and then it became hard to breathe. Every breath required intense focus and exertion, her chest heaved in and out like a musician desperately trying to play a broken accordion.

She fell to the floor. Her first thought was to get up, to tell everyone that it was no big deal, but her body failed to respond. Her heart was pounding as a sea of white faces surrounded her. Then a different face. It was Cedric. He knelt beside her and held her hand.

She could see everything happening in the room and could hear all the voices, but nothing felt real. Did she overdose? Was she having a heart attack? Everyone around her seemed to have a theory. All Victoria could do was stare at Cedric’s stoic face and blink when her eyes began to hurt.

“We have called a helicopter,” she could hear him say. He was holding her limp hands up to his chest. She had no idea how much time was passing.

The image of the malaria patient came back to her. A young girl no older than eight, all skin and bones, sweating away on the floor of a small tent. The girl had pulled clumps of her own hair out during the treatment, and her scalp had spots of crusted blood mixed in with the bald spots. The group photographer had made sure everyone got a picture with her.

Cedric cried out that the paramedic helicopter was getting closer. And something about a snake bite. They had wrapped one of her lifeless legs in cloth and propped it up on an old plastic foot stool.

Victoria pictured the helicopter flying over the little girl’s tent somewhere out in the jungle. Would she think, at least for a second, that they were bringing medication for her and her family? Or maybe giving her a ride to the new hospital in Kinshasa, where they had clean water and store rooms full of drugs?

There was a loud pattering outside, and two men in blue jumpsuits entered Victoria’s periphery. She closed her eyes, and when she opened them again they had already locked her into the cramped helicopter. It was a shock to be out of the dimly lit outpost and into the sterile, bright space of the air ambulance.

Her heart beat wildly again. One of the paramedics propped her head up on the gurney, and there, in front of her, was Cedric, still holding her hand. He had strapped himself into the small jump seat. Her heart slowed as the helicopter took off.

She felt that the girl was right beneath them now, looking up into the starry night and seeing the lights go by.

Was she still hoping the helicopter was coming for her? Most likely she knew that it was not. That the only thing she could expect was a group of Americans every other week with a box full of food and a photographer to take pictures.

Conor Fitzpatrick is a scientist from San Diego, California. When he is not in the lab playing with lasers, he enjoys reading and writing short stories. His work has previously been featured in The Paragon Journal.