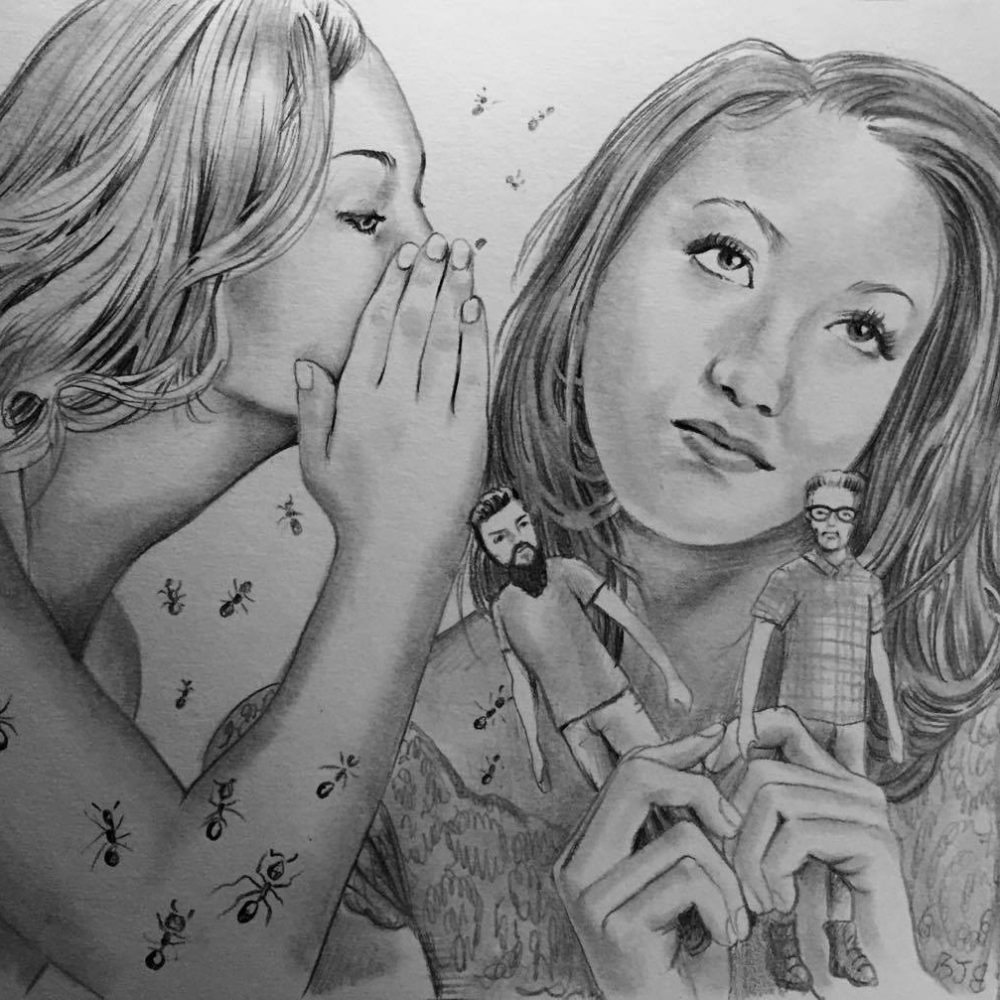 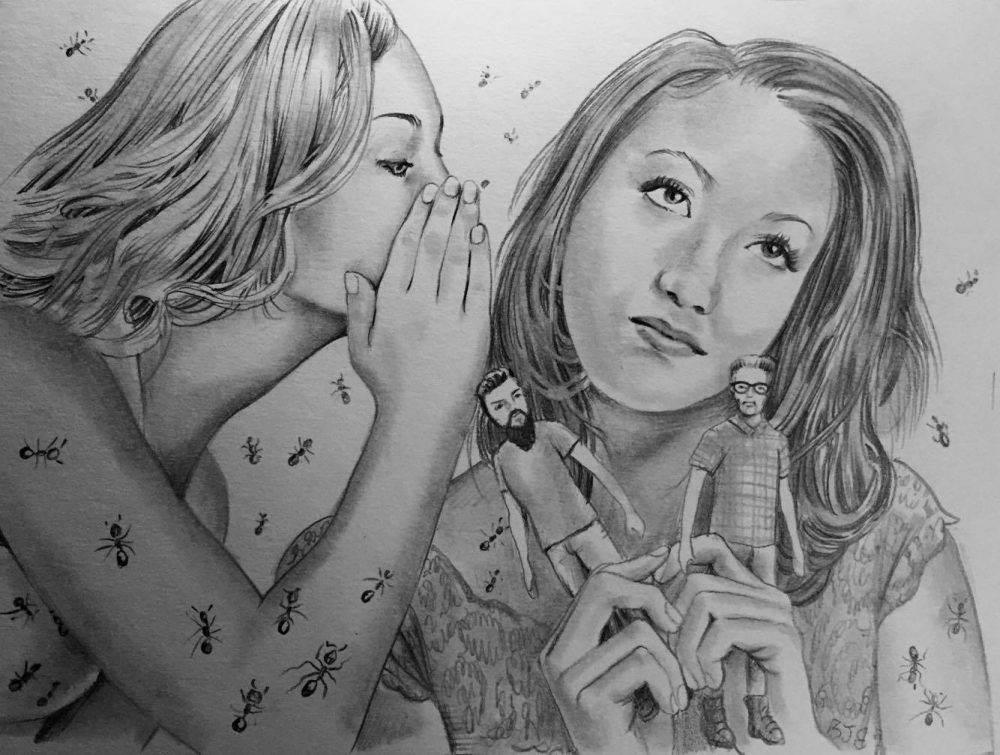 I have two men. One is young; the other, old.

The young one is a poet with a neat beard of black curls and smooth, soft eyes like river rocks. His song is old and creaky. He claims I’m wrong, but I know he loves me best when I’m looking in the other direction, at someone else’s ass.

Every day, the lost follow him, hoping to find crumbs in his footprints. My love grew from incredulity: what kind of poet leads? Truth is, I like to befriend his followers as they forage. They have good stories and they welcome observation. They all walk with a permanent stoop so that compared to them my poet seems taller.

In the ’80s the old one contrived to mash buttons on a keyboard for pay. As soon as the contracts were signed, his 20s 30s & 40s vanished. He has always been “employed.” He makes it so computers, querulous in nature, resist fighting one another.

He is sequoia-tall when standing at full height. His looks were too pretty in those faded basement photos, but have emerged as handsome with each fine line and gray hair. He’s paid well and lives high on the hog. The hog is not a place I’ve ever cared to build a house, but I like the view from there, anyway, and the neighbors have led fascinating, porcine lives.

Both men are beautiful. Young beauty might take tea with old beauty, but has nothing in common with it, or so it thinks.

I am a collector of lives. I keep them in an old waxed canvas army bag. The bag grows heaviest when the lives within it depreciate in value. My work exhausts me.

I can comb my hair a certain way and look attractive. Most days I choose not to, since my skin is like a mirror, luring admirers left and right. For the men I keep the light on in my eyes, day and night, which drains my energy, making it impossible to love both round the clock. But of course we know that men love best the things they most deplete.

One day, on my way to the café where my two men hold their monthly salon, I met a street performer in the middle of her act. She’s the sort of girl who keeps herself as thin as thread to stir up giving instincts in her audience.

The street girl was not young or old. She danced to a recording of space noise, an old Chock full o’Nuts tin at her feet. Her eyes were shut against the manmade world. I loved her well before she even opened them. I shed particles of love like a virus and she took them into her lungs, so that when the cosmos stopped singing, she tried to clear her throat, packed up without a word, and set out for the café by my side. She made a show of ignoring her reflection on my skin.

My men were at their table. The old one had his coffee and the young one sipped his tea. Here they staged a monthly argument: one would say why it was best I stay with him and only him, the other countered. Throughout their scrap, I abstained from any comment. Whether it was this man or that, I was an equal distance from my ruin.

Though I thought she’d stay demure till we had a chance to speak alone, my new friend’s wolfish eyes blazed. She was at home in a tussle. I asked her where she lived.

It doesn’t matter where one lives, she whispered back, because no matter what, one’s body lists toward the grave. I mistook this morbidity for wisdom and lay my head on her bony shoulder.

We girls sat holding hands, listening. When the young man said he could hone my spirit as iron sharpens iron, and the old one countered that the world was trial enough so a man should cushion his woman, the girl pointed out that any person who is a blade or a bed has ceased to be vital.

When the old one said I would benefit from his years of wisdom, that he could steer me from trouble, and the young one claimed a white canvas was better, that I could paint my own portrait upon him, the girl reminded us that their arguments were moot, that only murdered wills could change hands lover to lover.

Nearby a battle-weary computer crashed, nearby a stooped disciple walked unseeing over a cliff.

They three raised their voices, so that the other patrons looked harassed, and I sank deep into my thoughts. Should I choose?

The three continued to feud. I imagined the girl climbing into my bag, eating my life’s work till she was round as a grape. But before this image could fix itself and trouble me, the real girl slapped young man then old. Two hearty cracks. I felt the sting on my own cheeks. I learned they’d proposed a four-way resolution, with we girls as a buffer between them, lest the suggestion seem perverse.

As the girl steered me from conventional ruin, out of the café and into the domain of her stage, the street, I focused on the fit of her small hand in mine. Soon I would learn from her that not all apex predators warn with size. Some wait for you to drop near them with a load too hard to carry. Some crawl over you like ants, devour you; pick you clean enough for the sun to bleach your bones.

Maria Pinto's work has appeared or will appear in FriGG, Necessary Fiction, Great Jones Street, and The Butter, among others. She was awarded the Mastheads Residency and was an Ivan Gold Fellow at the Writers' Room of Boston, in the city where she reads for FLAPPERHOUSE and does karaoke. Her debut novel is in search of a home. She's working on the next.