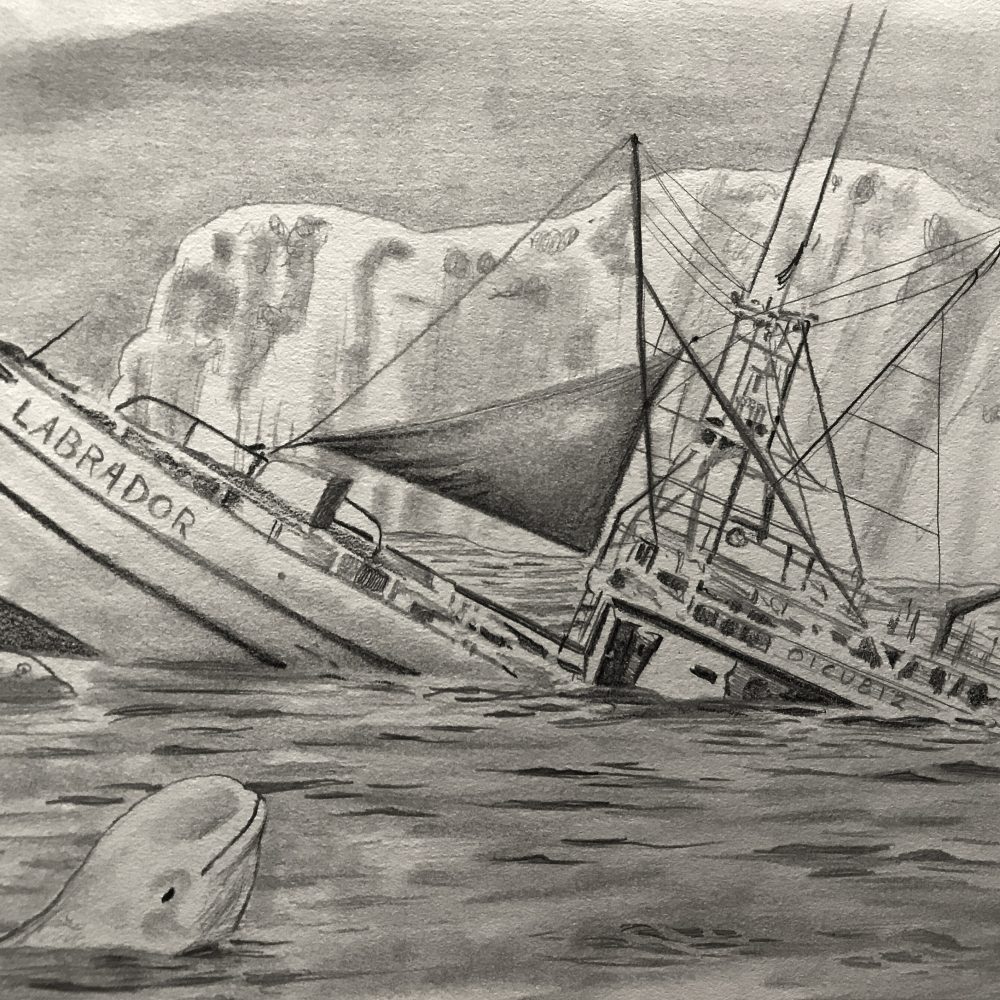 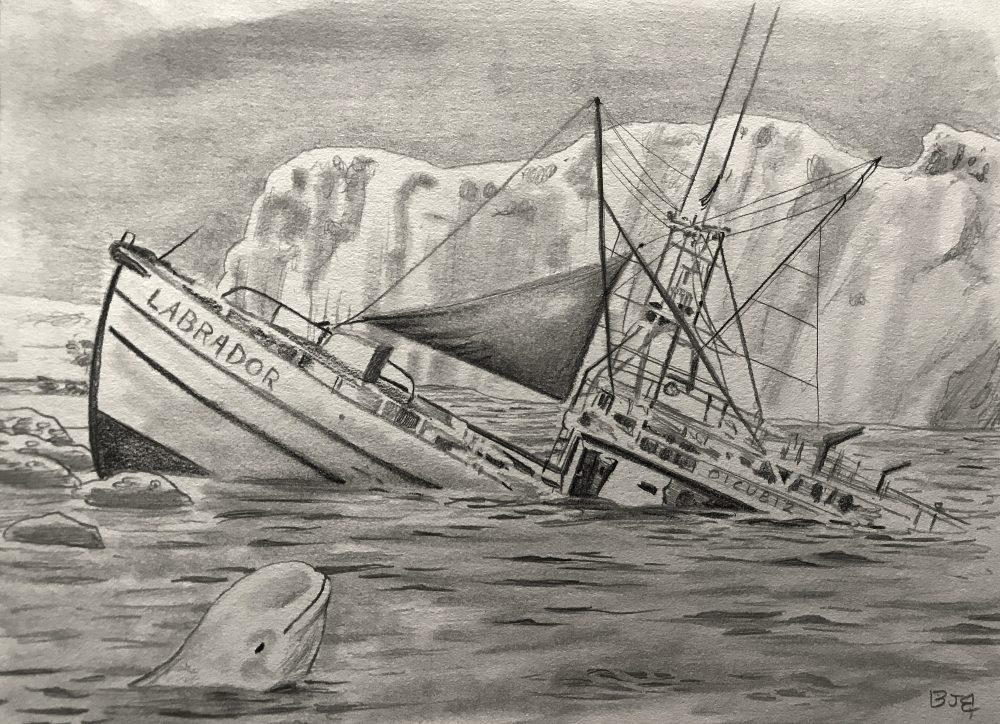 When he awoke, the beluga whale was still breathing. Around him, Marguerite bay scalloped into smaller fractals of watery inlets where the layered piles of pebbles and rocks and boulders increased in size as he looked away from the weathering coast. The creature’s chest rose and fell shallow, slow, where it lay prone on the sediment, beside a cliff hundreds of meters high where a frothy blanket of sea spray whorled angry against the coast. His son, Henry, had only caught glimpses of tails and spray from beluga blow holes while out on his down-easter fishing boat, the Labrador, before the drowning. Henry had never gotten to see one this close. How he’d love to have touched its scarred spongy skin, nicked in a unique pattern that told its unknowable story. It was pale with primitive limb buds, or flippers, eyes not yet rotated forward, but placed laterally on the sides of its lofty head, and the creature’s eyes moved glassy and sad with purpose, like the giant thing had grown in size to hundreds of tons of whale, but still resembled the innocence of a tiny human just past six weeks in its embryological development.

Over the years, he’d seen fewer and fewer belugas himself. The ones he did see were like the stranded creature before him—solitary and lost and misplaced, and although they became estranged from their pods, they did not seem distressed.

He’d hit the iceberg during the storm that came in fierce and sudden with gale winds that blurred the sea into the sky and obscured all navigation. The crashing swells sloshed onto the deck of the Labrador, tossing it even closer to the white beacon that seemed in its massive height, hundreds of meters of ice, to have a sick gravitational pull. The back transom and the platform and the washboard of the Labrador was broken off on one side, with the starboard end smashed open and flat like the bed of a fork lift, and it was shipwrecked half in the water and half on the rocks. The water was clear in the tide pool and underneath it he could see that the keel was badly damaged. Her motor was still sputtering in a shallow tide pool. She had served him well, through forty-five years and a moratorium on cod fishing that had nearly starved his whole family. She lay on the rocks now, beside gnarled driftwood and a disorganized pile of misshapen wooden planks and loops of knotty rope. The moss on the cliffs signaled a vibrant spring, and soon there would be hydrangeas surrounding the grey box homes that speckled the coastal roads.

Right now it was still frigid, and to him, it always looked grey.

He lay there, alive, but his fingers were white at the tips, and his toes he could not feel, and icicles had formed tiny stalactites on his beard. His soaked coat did not help to warm him and his phone could not be felt in the inner pocket. When he had fallen from her, he remembered trashing about the water, but the only thing that guided him through the bay was the whale.

It pushed pressurized air through its melon, creating a song that he could not understand now. Its mouth opened, revealing the cetacean’s sharp teeth, its pink tongue.

The coast guard would search for him. Without the Labrador, there was nothing left. Marie was gone, Henry was gone. Even the golden retriever, Diana, had taken her last heavy breath where they walked the gravel trail every day on the cliffs. Doctor Merritt had talked of electroconvulsive treatments and an inpatient admission, and for the most part, he took his medications as he was directed, got out of bed every day like the day before it, but he wished now that the beluga had not put itself in this predicament to guide him in, riding the waves so naturally, happily, alongside the Labrador.

He rose now and he straightened and he picked up the rope and he tripled it and he tied it tightly to the tail of the beluga. Then he stepped into the water. It was past his rubber boots and they filled with it and he pulled the rope and on the standing platform he tied it to the pot hauler, and though he could not feel his rheumy joints, he felt the platform giving beneath him. He drove the Labrador full steam and at first, he did not move at all and when he looked back, the creature possessed a look of terrible betrayal. The trunk cabin was almost filled with water and he stood there on the platform for a moment gassing the engine. And then it chugged slowly, slowly into the bay. He released the whale where the Labrador began to sink.

Melissa Franckowiak is an MFA student and a practicing anesthesiologist in Buffalo, NY. Her short fiction piece, The Very Pertinent News of Gabriel Vincent DeVil, recently placed in the 86th Annual Writer's Digest Literary Fiction Awards, and her work has appeared in Nanny Magazine, Parent Co., MothersAlwaysWrite.com, Blood Puddles, and the anthology Children of Zeus, among other publications. She writes thrillers as Melissa Crickard. Melissa attended Georgia Institute of Technology and the University of Buffalo, and after being awarded two Bachelor’s degrees in Physical Therapy and Chemistry, she advanced toward her M.D. degree from the State University of New York at Buffalo. Melissa is the mother of two children, the owner of a chatty Panama Amazon parrot, and a lover of all things outdoors.