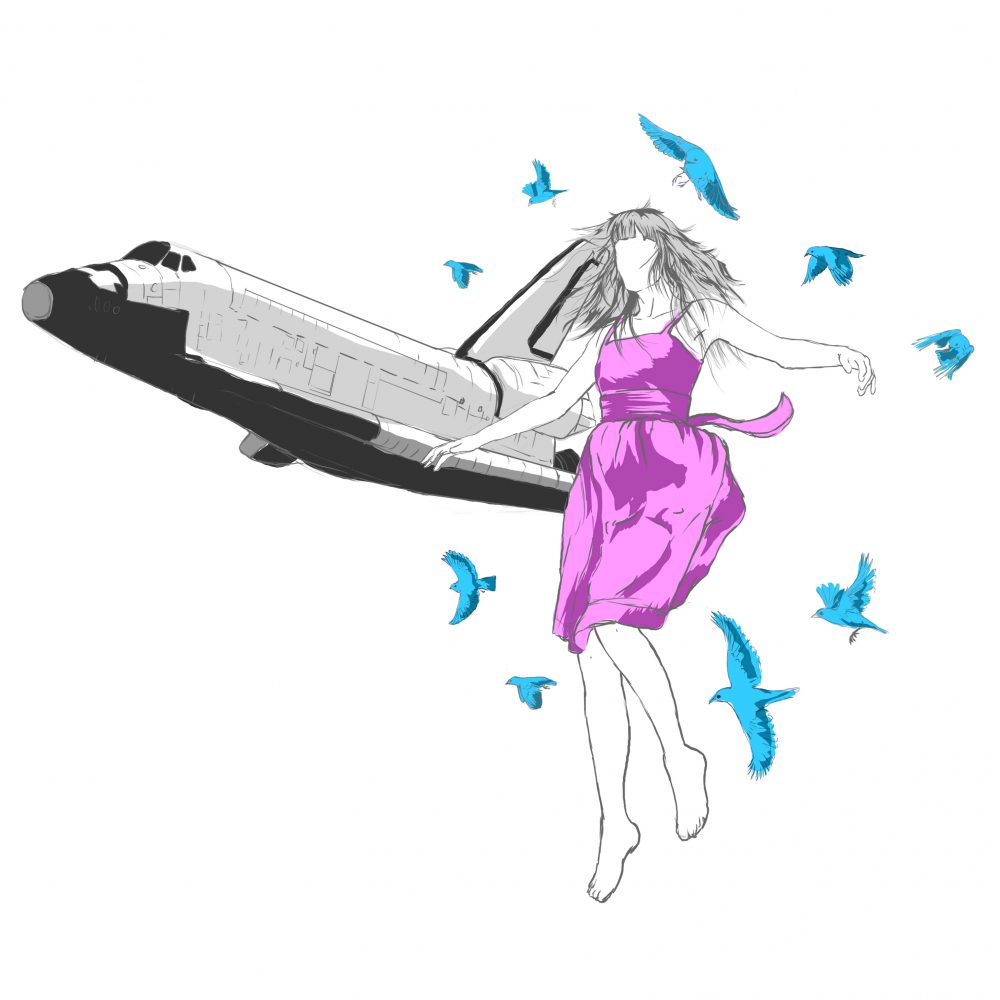 When Whitney returned from her fifth mission, she didn’t care about how it felt to hold her husband. Whitney missed space. In space, on the shuttle, there had been so much of it. On Earth, Whitney watched bluebirds mate and envied how they flapped their wings after and returned to the sky. It was the ability to move like they wanted to, even in high gravity that made Whitney press her face against the glass of her kitchen window. And it was her inability to move like she wanted to that made Whitney lift her pizza from her plate, hold it high, and then watch the slice fall with a plop down onto the ceramic.

But the worst was the inability to move as slow as she wanted to in high gravity. Her husband would zip into a room, expect her to kiss him, to touch him in seconds, and he would her–he would hold her and kiss her and fuck her–and all of it took seconds.

And it was that and his failure to appreciate patience that made Whitney cringe when she dropped her fork onto the oak table, listening to the lack of time before the clang.

On the Wednesday after Whitney had been released from the NASA Recovery Center, she drove her small pickup into town, and purchased a pair of binoculars. The man behind the counter told Whitney that if the sky was right, and the wind was timid, then she could see through the trees so well that there wasn’t a bird she wouldn’t be able to spot. Whitney had told the man, “I only want to see them in the sky, though, maybe mating.”

The man looked uncomfortable and shuffled Whitney’s purchase into a brown paper bag, which Whitney carried into her truck. She placed it on the passenger’s seat next to the schedule of therapy sessions NASA required, and buckled up. For awhile, Whitney sat strapped to her seat and imagined the pull of gravity slipping over her skin, past her, down to Earth, and away, beneath where she could leave it behind.

In her head, Whitney imagined floating and bluebirds flying next to her shuttle.

At dinner, Whitney told her husband she wanted to escape for the weekend, and he asked her, “Something romantic?” He reached his hands around her shoulders, without a second of hesitation, touching the skin of her neck. His fingers were gone before Whitney could release her breath.

“No,” Whitney said. “Nothing like that. I want to watch birds.”

“Well, maybe something like that,” said her husband. He winked.

At the hotel, on the side of a mountain, Whitney climbed a black spruce to the highest branch she thought could hold her weight.

“Whitney,” said her husband, “you need to come down.”

Whitney lifted her binoculars, pulling them over her head. She held them in front of her for a moment before watching them drop to the earth below. It took only seconds for the crack of the hard plastic to register in Whitney’s ears.

Christopher D. DiCicco is the author of So My Mother, She Lives in the Clouds and other stories (Hypertrophic Press) and teaches creative writing to high school students. His work has been nominated for Pushcarts, Best of the Net, Best Indie Lit New England, The Million Writers Award, and has appeared in such places as Superstition Review, The Fem, and Gigantic Sequins. Visit www.cddicicco.com for more.