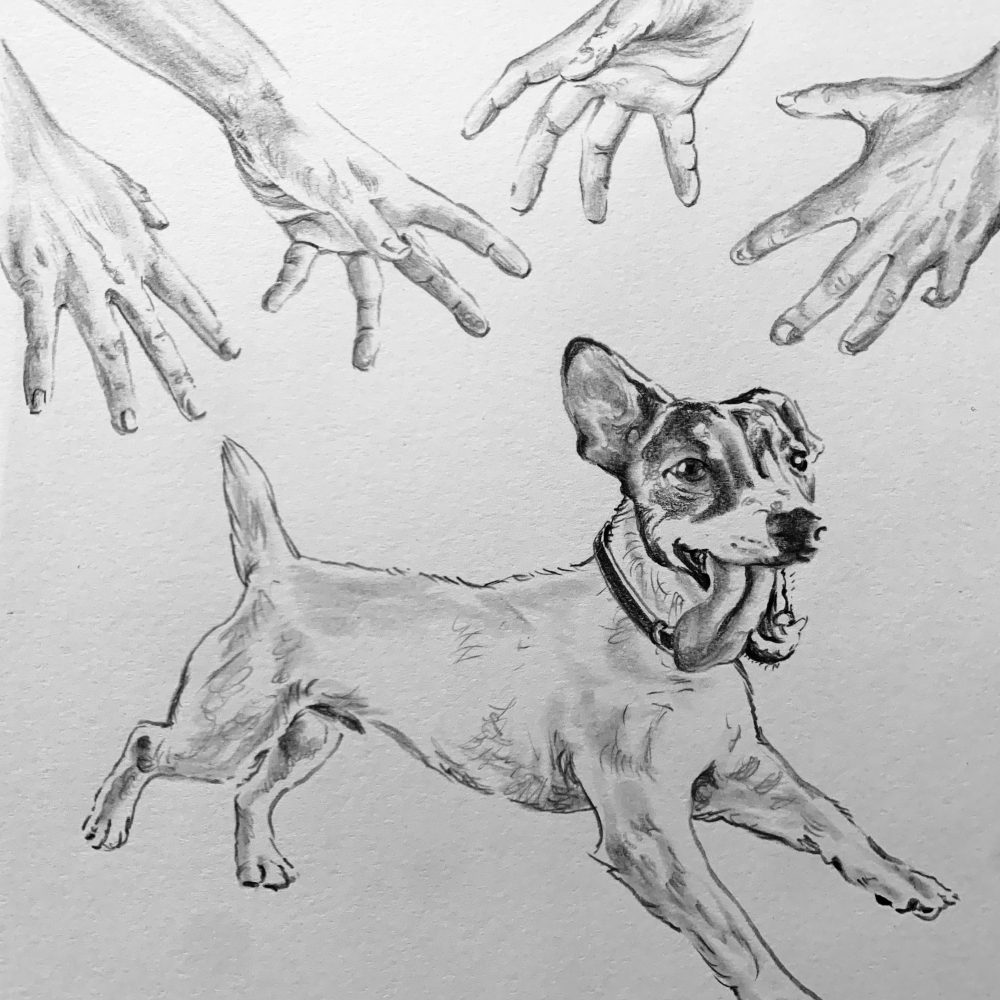 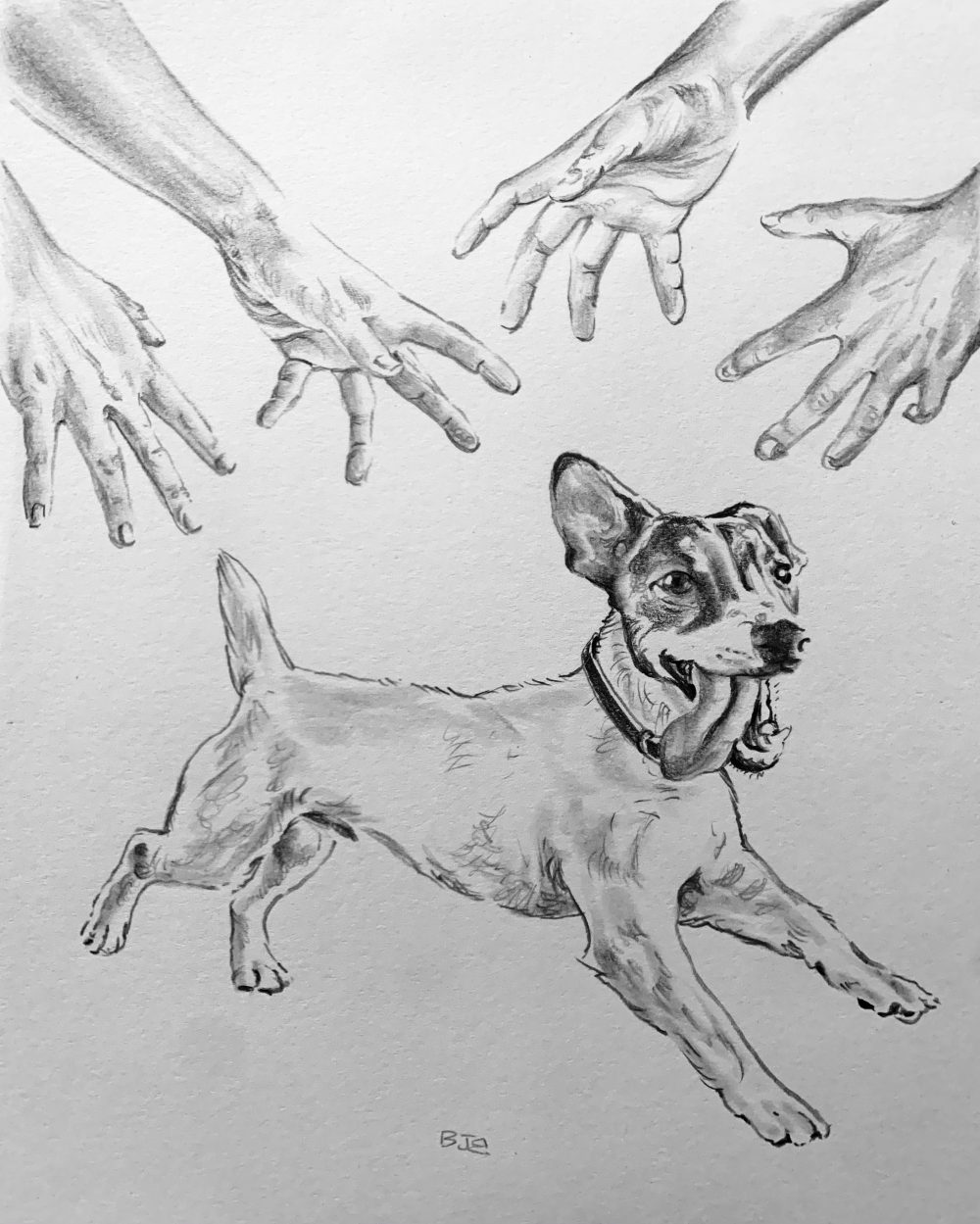 Bottles of Bud light skid around the backseat as Donna’s puppy yaps at her. Donna drives over the 18 inches of dead grass separating the little parking lot from Route 17. She scoops up the pup and carries him. Before ringing the bell, she puts on her mask. She has doubts about COVID, but she wears a mask as a courtesy to the teacher. This is a peace mission.

Mr. Spenser (call me “Matt”) answers his bell in the same tight jeans he wore to Parent-Teacher conferences, but instead of the starched shirt, a sweat-dampened T clings to his lean frame.

He laughs at how the puppy licks Donna. “Your neck will be immaculate!”

Matt doesn’t respond. In the silence, the puppy looks up and squirms. His skin is loose. Donna struggles to hold him.

Many parents want Mr. Spencer removed because of the liberal propaganda he teaches in class. Some are ready to take matters into their own hands. Donna is just happy daughter is excited about the school.

“Donna. I’d shake your hand but—” He gestures to the puppy.

The puppy’s foot catches the fabric of Donna’s blouse, hiking it up,

exposing a post-partum softness she has not managed to crunch away.

“You said you live alone, and this guy needs a home, so I thought—”

Donna jerks her head toward the apartment next door. “Your neighbor has a whole menagerie: dogs, cats, a parrot, and Boys.”

“Then maybe she can handle one more.”

Matt mulls this over. “I don’t understa—”

“It’s an expression. Like the idioms you were teaching Chloe’s class? I hear it all on Zoom.” She wriggles the puppy until her blouse falls back in place. “Commie stuff in Animal Farm… work-at-home parents hear everything. Anyway, this guy will be your best-friend and alarm system rolled into one!”

“An English teacher believing everything he reads!” She leans in and whispers, “Bambi and Thumper were never friends!”

Before Matt can answer, the pup twists free. It lands on the dirty tile of the hallway and darts through Matt’s legs into his home. Donna hesitates.

The puppy slams into a stack of unpacked boxes, then scrambles under the couch. Matt cries for help. Donna crouches down and reaches through dust bunnies and stray Cheetos. She clamps a downy paw, but the pup’s collar catches on a spring poking through the couch’s underside.

Matt obeys and the puppy—his collar still caught—rises as if in a noose, then writhes backwards out of the collar, and bolts through the doorway. By the time Donna gets to her feet and out the door, the dog is gone.

Donna runs to the parking lot. No dog. She scans the grass, then down Route 17. An opossum lies legs-up in the gutter, but no dog. Northbound is clear. She turns back—something flashes under her car. Donna snatches a hind leg, but the silky fur slips through her fingers.

Heat and relief overcome her, and Donna sinks to her knees on the pavement. Matt’s gold wire glasses melt in the sun.

“Donna? Are you okay? Should I call someone?”

She’s surprised how attractive he looks. His bicep—puny compared to her husband’s—bulges as he clamps the puppy to his chest and helps her sit. She puts her head between her knees. She itches her eye and gets a finger full of runny liner and mosquito. The puppy whimpers.

Matt suggests water. Donna shakes her head and rolls the mosquito into a ball. “Your class is the first time Chloe’s been excited about school since Kindergarten.”

Donna focuses on Matt’s Prius. A bumper sticker spells “coexist” in symbols of warring religions. “A lot of people died on 9-11.”

Matt dumps the puppy in her lap, and says he’ll get water, but notices Donna crying so he puts a hand on her shoulder. “Most people wouldn’t hurt a fly, no matter their religion.”

Donna rubs the mosquito to nothing and lets the pup lick her finger. “People in this town wouldn’t hurt someone with a dog.”