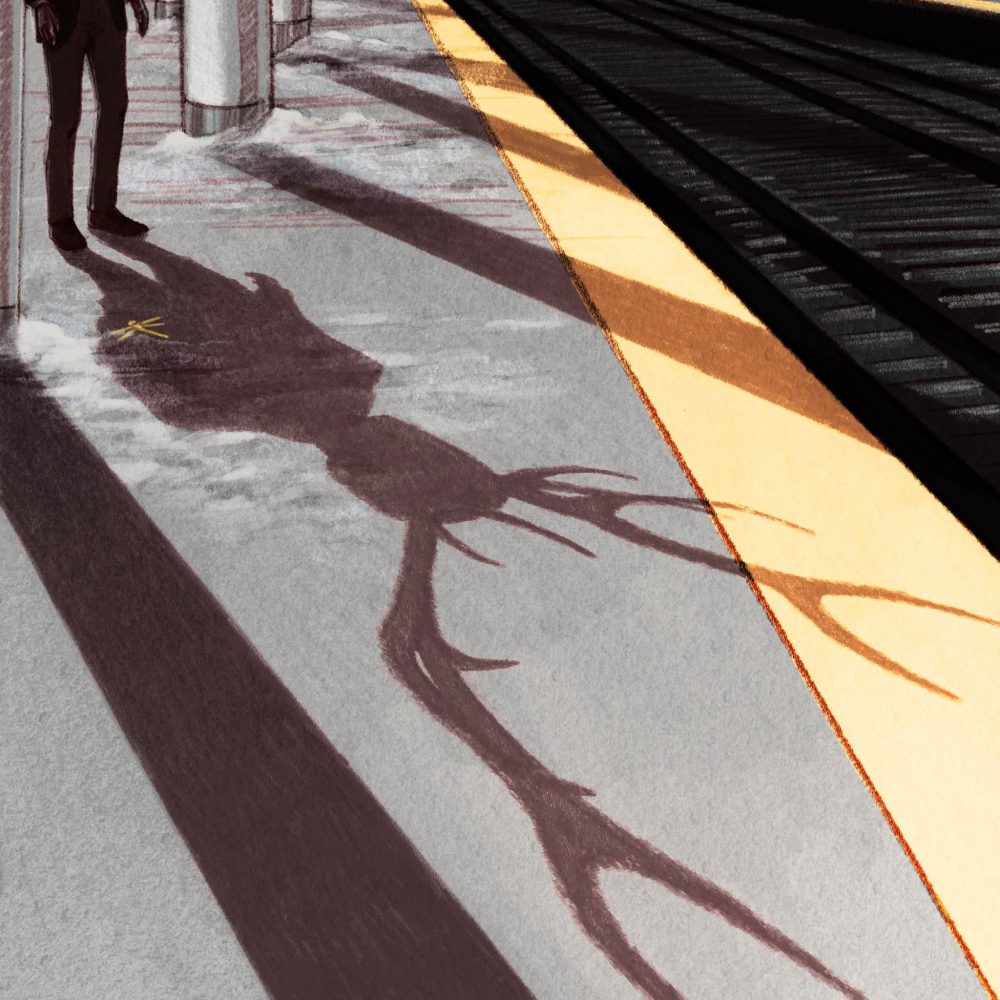 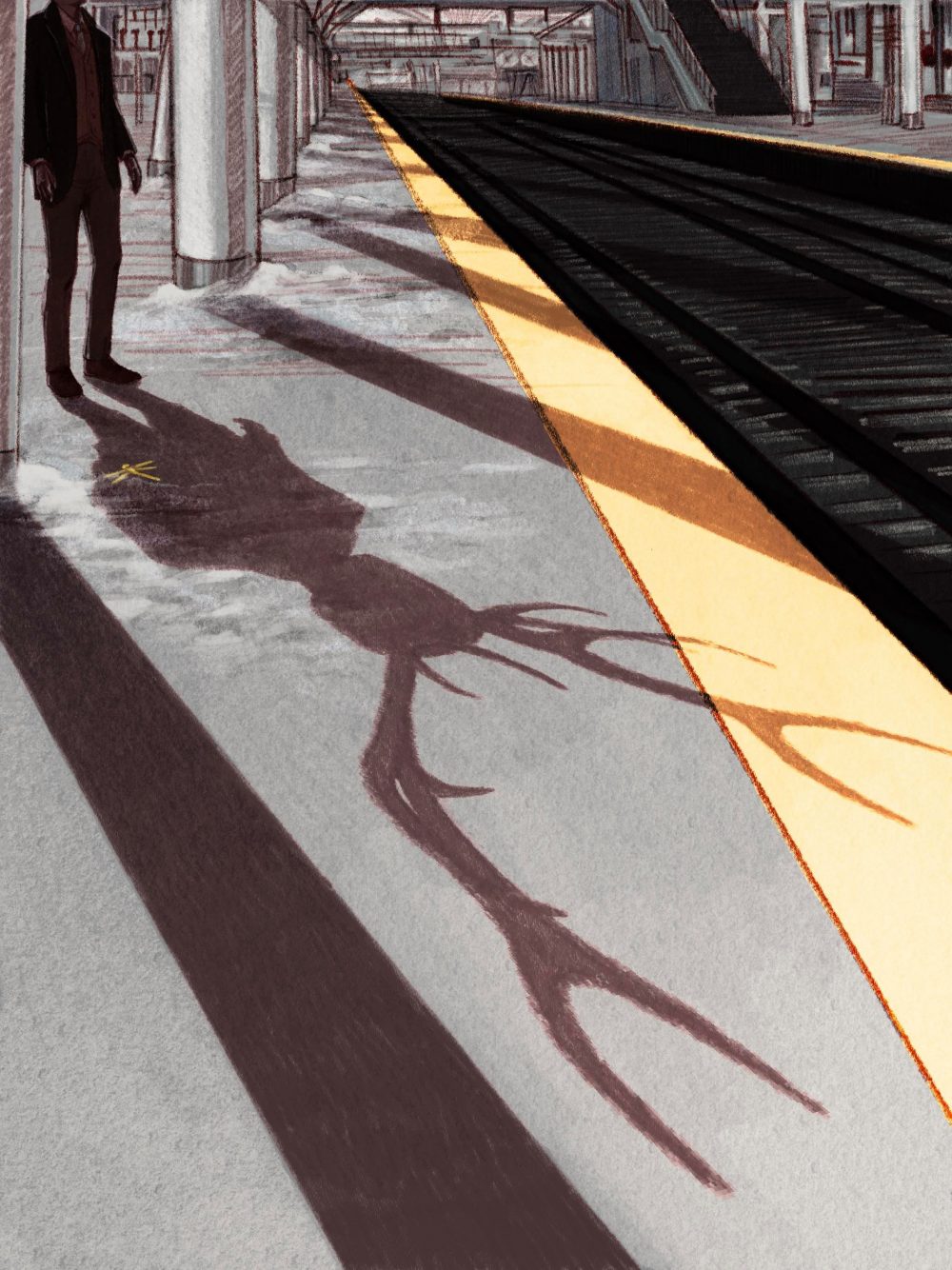 I can’t see his face, but the man’s antlers cast jagged shadows on the cold concrete while we wait for the train.

I’m taking the train from Denver to Glenwood Springs as a kind of treat, a gift of leisure I don’t know that I’ve earned. I live with my father and he is slowly losing himself, the most recent memories the quickest to flit in and out, and I just want to be in a place where no one asks me what I am doing in their apartment. At least for a day or two.

There’s only two of us waiting on the platform and I wonder if people have moved beyond this type of old-fashioned travel, if perhaps I’m engaging in some sort of lost art.

The man with the antlers turns to me. He’s holding an apple, the largest, most perfect apple—slick and green—the size of a newborn’s head. He’s holding it to his mouth so I can’t see his face. He reminds me of my father, not in anything visual but in the heft of his presence.

I lean away from the train tracks trying to make out his expression, to catch a glimpse of his countenance because the longer he looks at me the more certain I become he doesn’t mean me well.

So. Visiting Glenwood for vacation? I ask. Or heading home?

He doesn’t answer, but he does take a step toward me. It’s a grey, cloudy day in Denver, wet slush on the ground from yesterday’s snow. The wind gusts randomly with violence, pushing one way or another, and in this moment, it pushes me toward the man.

Now that he’s a touch closer I can see he’s wearing gloves but they don’t seem to fit correctly, at least on his right hand. While the other fingers of that glove are taut and gripping the apple, his index finger hangs loose, drooping, and pointing to the ground. A part of me knows there’s no index finger in the glove, but another part of me, something deeper and more primal, something rooted in fear and motivated by self-preservation, needs to look and see where his digit-less glove finger is pointing. I look down at his feet and there lies the most beautiful golden dragonfly. It is dead, crystalline wings stiff. It appears to move with the wind though that movement is lifeless, just a flash of brilliance skittering over the concrete.

I go to ask the man what he means by pointing at the dragonfly but I am interrupted by the whistle of the approaching train.

The man with the antlers and the apple is approaching too. Not fast. Steadily. I take a step away. Then another. And another until I hear a crunch and look down. I have stepped on the golden dragonfly. It must’ve blown beneath me.

I pick it up and hold it out, its brokenness covering my palms. I realize I am crying.

The man is nearly upon me now but I can’t move away. He doesn’t attack. Instead, in one smooth motion, he trades me the apple for the dragonfly. It is heavier than I expect and I fumble it, my hands grasping at its slickness, until it falls and bursts.

I apologize and try to pick up the pieces. When I rise the man is gone and the train has arrived. I scan the windows for him but he is nowhere to be seen.

The train doors open but I don’t move. I watch as a family exits, dragging their luggage, dragging each other. The children mimic the adults in ways I doubt they realize. I wonder if they will remember this moment, not just the trip, but this exact moment. I wonder if they still think that everything makes sense, that the world isn’t filled with inexplicable encounters. I wonder if they know their trajectories are already determined, that it is just a matter of time. A luggage wheel catches on a train step and it takes all of them to pull it free. They all laugh the same way and then they are gone and the platform is quiet again.

Eventually the doors close and the train pulls away. I stand there for a few minutes, wind buffeting me one way then another, until I finally head home, determined to ask my father not about our misremembered history, but rather about all the wild things he has seen and never shared.