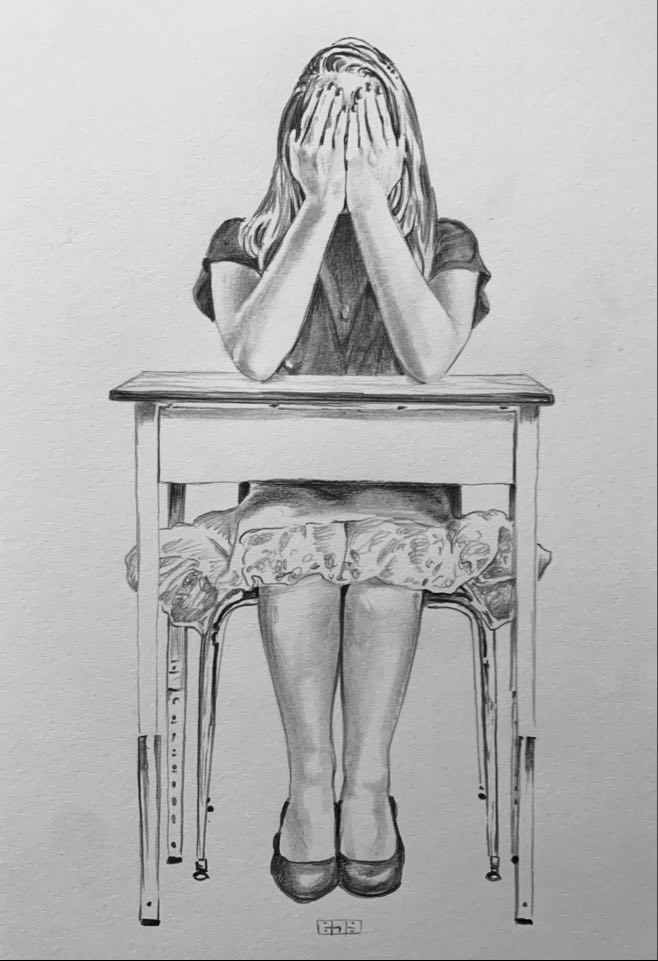 On Miss Montgomery’s polished oak desk, in 5×7 tan envelopes, our report cards were alphabetized and stacked thirty-three-high from Adams to Yetter. Two of you will redo, Miss Montgomery said, using the low vowels for failure. She sounded like she was sorry, like someone had told her she needed to repeat her first year of teaching, too.

Flunk, some of us said, chattering like we would never regret our lives. Flunk sounded like turds splashing in the basement stalls. Flunk was funny like clunk and thunk. It rhymed with drunk and stunk. Flunk, we repeated, us smart kids, because something so impossible was blasphemy we could say aloud.

Flunk was breasts in fourth grade, a mustache in the fifth-grade class picture, a shame of unexcused absences from an undersized desk in the back of the room.

Flunk was the bruise that would blossom on two of us when we read our cards, but we counted three boys and one girl who didn’t open their envelopes. They might as well have screamed they were the ones who could have flunked, the ones who would carry those cards home with them like the x-ray or blood work reports of our grandparents and great-aunts who were fatigued and losing weight.

None of us mentioned that small comfort of privacy those four classmates kept. None of us had flunked, but we boarded our bus and lied about our grades. We claimed all As and laughed, or we said our Bs were in art and music and didn’t count. That our “needs improvements” were in citizenship and gets-along-with-others, things on the side of the report card that didn’t matter. That girl rode by herself way up front, but those boys who hadn’t looked sat three rows behind us like they always did. Like the back seats belonged to them. Like they’d claimed them for another year.

Once we were moving, we only whispered flunk. Once two of us stepped off where their mothers were waiting, we just thought it. None of us ever said aloud that Miss Montgomery, our nine-month visit over, had held her smile like a nurse while we left, reminding us that we never wanted to be summoned straight back to where we had just been examined.

Gary Fincke's latest collection of full-length stories is Nothing Falls from Nowhere (Stephen F. Austin, 2021). His book-length collection of flash fiction, The Corridors of Longing, will be published in October by Pelekinesis Press. He is co-editor of the annual anthology series Best Microfiction.