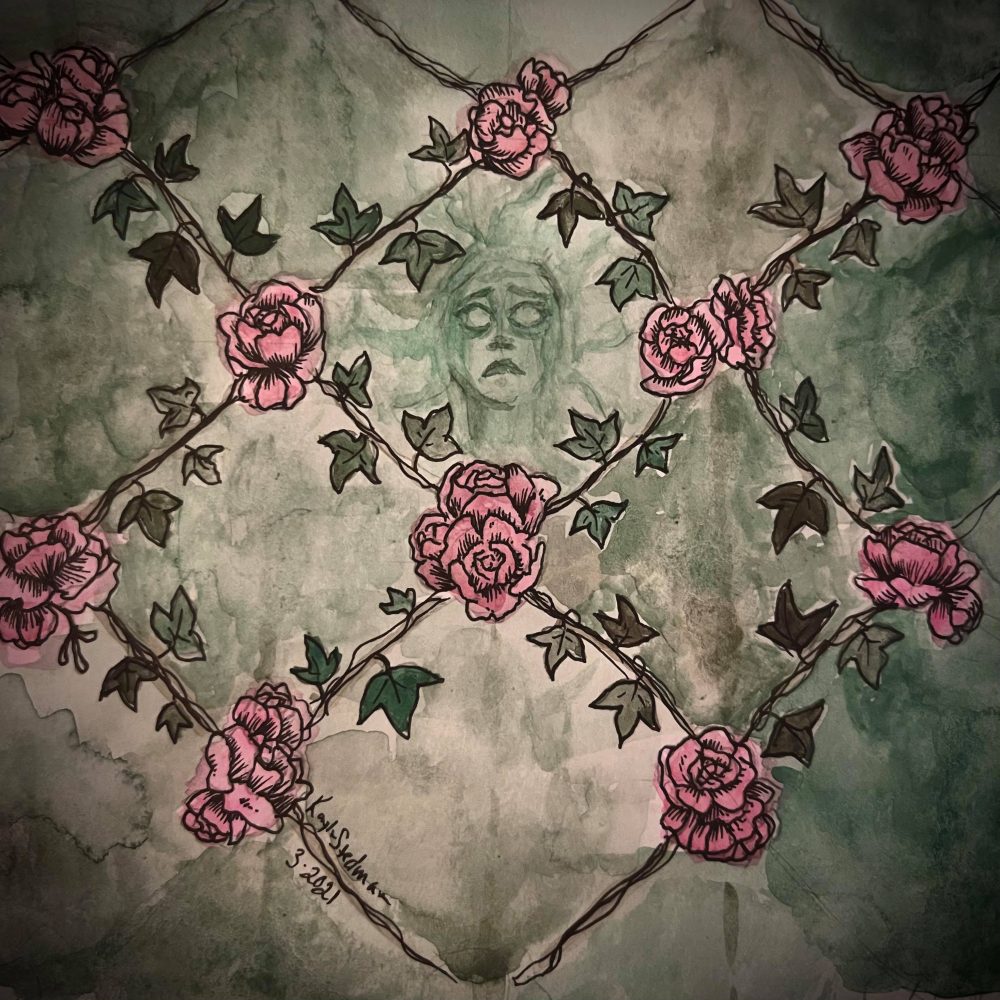 The wallpaper had a trellis pattern of the wallpaper was meant to evoke outside, tea on a Sunday, brunch with witty friends. The flowers – bountiful peonies pregnant in their beauty. She does not know these things intimately and so thinks they are mocking her.

Inside, in the walls of the great house, the wooden doors are heavy as history. In one room, the young woman, deemed hysterical, given the prescription of solitude, spends her days with an embroidery hoop, herself, and the weed-like creeping of death.

Twice a week, she is permitted to venture onto the grounds for chaperoned walks – promenades, they call it. When she steps out into the air, she breathes in the world. It is enough to fill her daydreams until the next outing.

Inside, heavy damask curtains, an emerald velveteen settee, and four-poster bed – all very opulent. Be grateful, they say. She moves from one to the other to the other all day and all night long.

The ghosts of ancestors tickle her feet at night and dance in the corners of her vision. Her breathing is labored. They say she is insane. Her bleeding has stopped. They say she is a spinster. Her heart bleats in a frenzy when she lies in bed talking with her dead sister.

She tries to slip out when the maids come, but she is cajoled and coddled back to bed.

She digs her fingernails into the walls, edging them into the slits. Pull and pull and tear at the wallpaper in long strips like removing viscera from a body, stringy trompe l’oeil entrails. They are beautiful in that bloody bodily way.

When they come in the morning they remark on her raw fingers; her nails have become jagged claws. But her hair, the maid says as she rakes through it with a silver comb, is still as lovely as ever, thick and braided, shiny like pennies. The young woman’s fingers are taped together and her hands are dressed until she only has two thick batons at the end of her arms.

The maids call in her father. “You have ruined the wallpaper,” he says. “It is all in your head. We made this room beautiful for you. The doctor says nature can heal.” He motions to the verdant wall coverings, the lush materials, the view out the window. “So, we brought it to you.”

He leaves her writhing on her bed, where the wallpaper made caustic her blood, drowned her lungs, and killed her. Slowly, in her beautiful prison.

*attributed to a letter written in 1885 by William Morris in regard to his wallpaper containing arsenic. Many Victorian era wallpapers (as well as other items) contained Scheele’s green, a pigment that poisoned many.