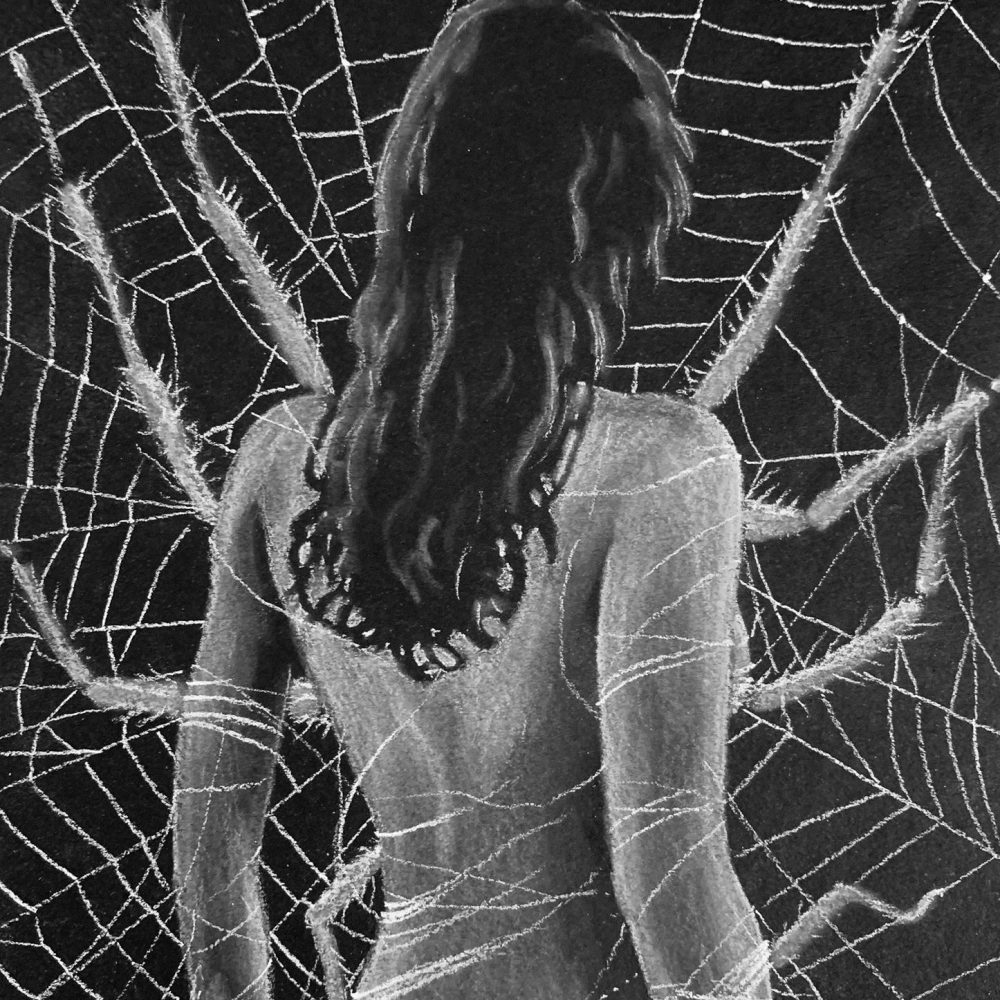 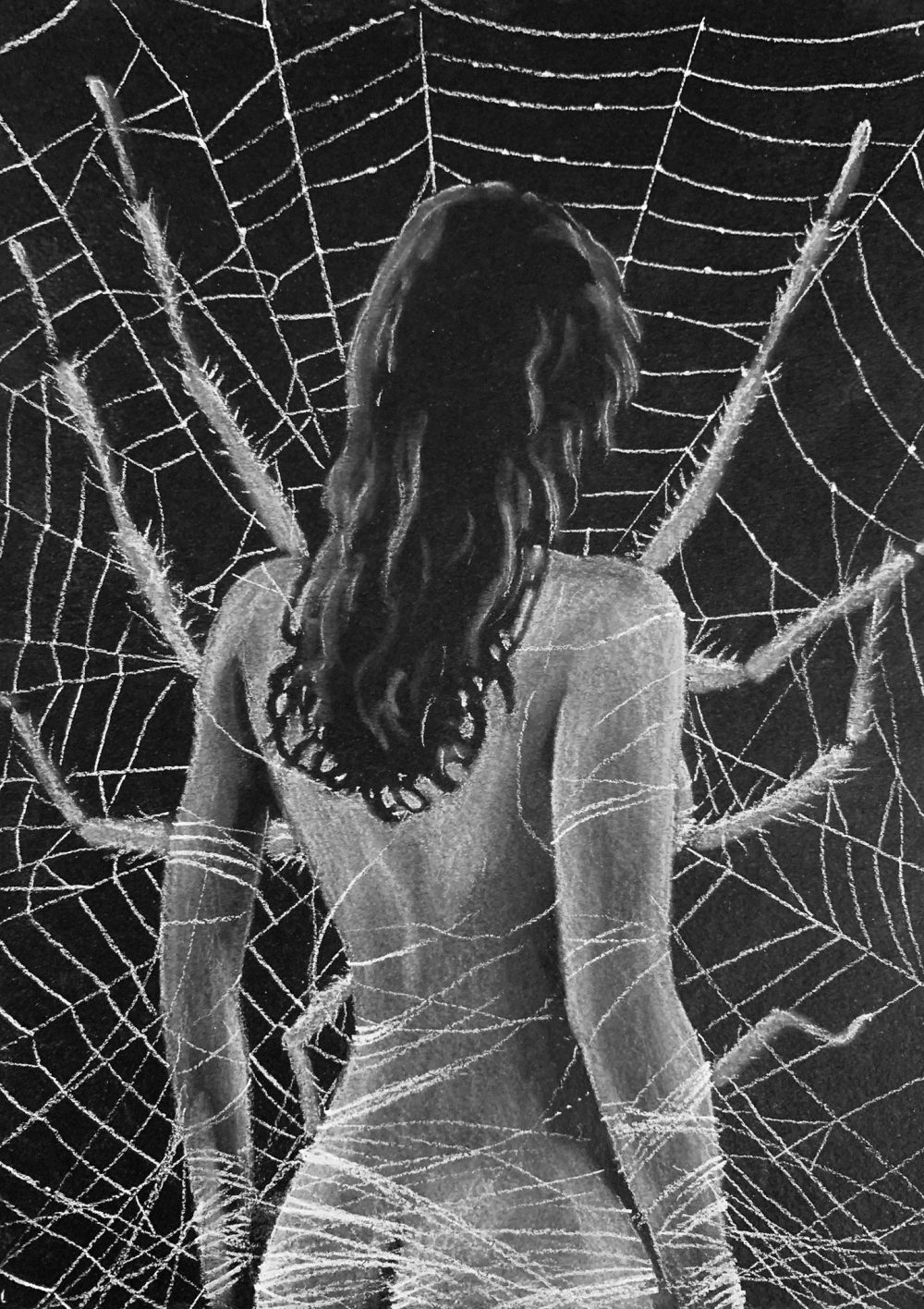 She was unlucky. Her mother died. Her brother abandoned her.

Still she had the best treasure in the world; she was breathing; she was young. But she could not see it. She always moaned, “My mother! My brother! I cannot labor alone!”

She wailed so piteously that the rabbits lay prostrate in the garden, flattening their aching ears against the mud, depriving the turnips of sun and air. Deprived, the turnips could not stretch their roots down into the body of her dead mother, awaiting the turnips’ touch to turn her to soil and release her ghost. Consequently, the beleaguered mother could neither rot nor rest, for even in death her daughter’s moans made her toss and turn.

At last, the mother dragged her weary corpse up from its useless grave, startling the rabbits, and called upon the Blind Spider. “I am dead and would return to dust, yet I can neither rot nor rest until my daughter learns to live.” Then she gave the spider several fat flies for, unlike the girl, the mother understood that one must always pay.

The spider sucked upon the flies and agreed to help the child.

The next morning, the dead mother plodded into her daughter’s house, entered her bedroom, and leaned over her sleeping child. “Follow me,” she whispered. “We must see the Blind Spider.”

“No!” groaned the girl, rolling over and brushing off bits of the flesh that flaked, like leaves, from her mother’s corpse. “It’s too far. I hate walking. I hate spiders. I love only you and you left me.”

But the rabbits snapped at her heels and butted her with their broad feet, until—at last—the girl trudged forth.

She should have danced! For she was breathing and young.

After many complaints, they reached the cave of the Blind Spider.

The good creature pitied her. “Your life has been fraught,” she said, “with more burdens than ever a girl could bear.”

This surprised the mother, who knew only hard lots, but as the girl embraced the spider, the pounding of complaints in the dead woman’s head eased and she retired to her grave, leaving her daughter in eight-legged care.

“You must weave,” instructed the spider, “the skein of your life. Hold out your hands.”

Extending a long-jointed leg, the spider shot a dazzling spit of silver at the girl, who caught it awkwardly, for it was fast and strong, but also sticky, light, and unwieldy. “Take. Weave. This is your mother, who died for you. Loom her and make of her your warp.”

Now there stood about the girl many fine looms on which she could choose to weave her life, but she did not move toward them.  She did not even look about. So dazzled was she by the tensile strands shimmering with a missing mother’s love, she simply stood and stared.

At the end of the day, the Blind Spider asked, “Have you warp enough, my dear?

And the girl, who had not touched loom, gazed at the threads in her hands and felt greedy. “No, Sweet Spider,” she answered, “my warp is but begun.”

When night fell, the girl did not untangle the skein from her arms but wound it into silver bangles about her wrists. She ringed her fingers and pulled the longer threads into a glimmering cat’s cradle. She held the webbing to the firelight until, exhausted, she let her web-bound arms fall.

But, she was young. She was breathing. She could have stepped to any loom and begun her life. She had not tasted exhaustion, but she fell asleep with her arms entangled. She folded them up and nestled her face into the sticky webs, dreaming of a time when she was a baby, and no one expected her to work, and her mother held her doing the work of two.

The next day was like the first. The spider spun the memories of the lost brother and you can imagine what happened. Only this time the girl’s arms were encumbered by what should have worked the day before. Nonetheless, she raised her entangled arms and admired the silver filament before her eyes. As the spider spat forth joyous moment upon moment spent with her brother, the strands wrapped about the girl’s body, binding her arms into their lifted position. This delighted the child. Now she could hold them up with no effort!

“This is your warp,” reminded the spider, “which I spin for you. Take. Weave.” She led the girl to a lovely loom, but the girl, unable to see through the mass of shining threads in front of her face, was as blind as the spider and did not see it.

At dusk, the spider again asked, “Have you warp enough?”

Still admiring the web, the girl replied, “No, Sweet Spider, my warp is but begun.”

The next day was the same. The Spider spun out more of the girl’s regrets and the foolish child did not even notice she was entangled.

Back in the grave, the poor mother still could neither rest nor rot.  She returned to the Blind Spider, but neither she nor the arachnid could find the girl. They concluded that, afraid of work, the girl had run off, leaving the mother doomed to wander undecomposed forever. “What a big fly!” exclaimed the weary corpse as, leaving the cave, she passed her web-enthralled daughter. “I am sorry for troubling you, but at least you’ll be set for winter!”

The Blind Spider scuttled over to the mass and tried to recall how she had acquired such a prize. Determining it the gift of a thankful apprentice, she resolved to save it for the Solstice. But on that hallowed night, when she went to suck, she found an empty husk of wasted thread.