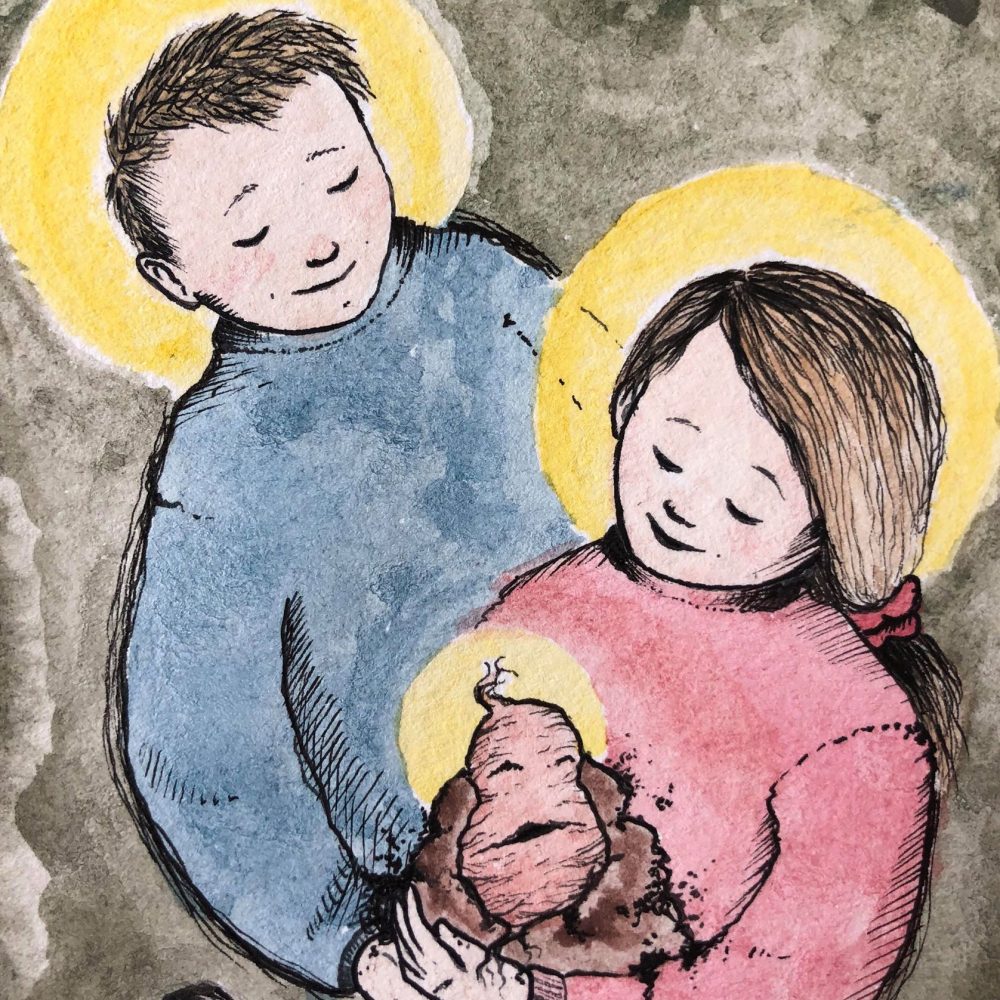 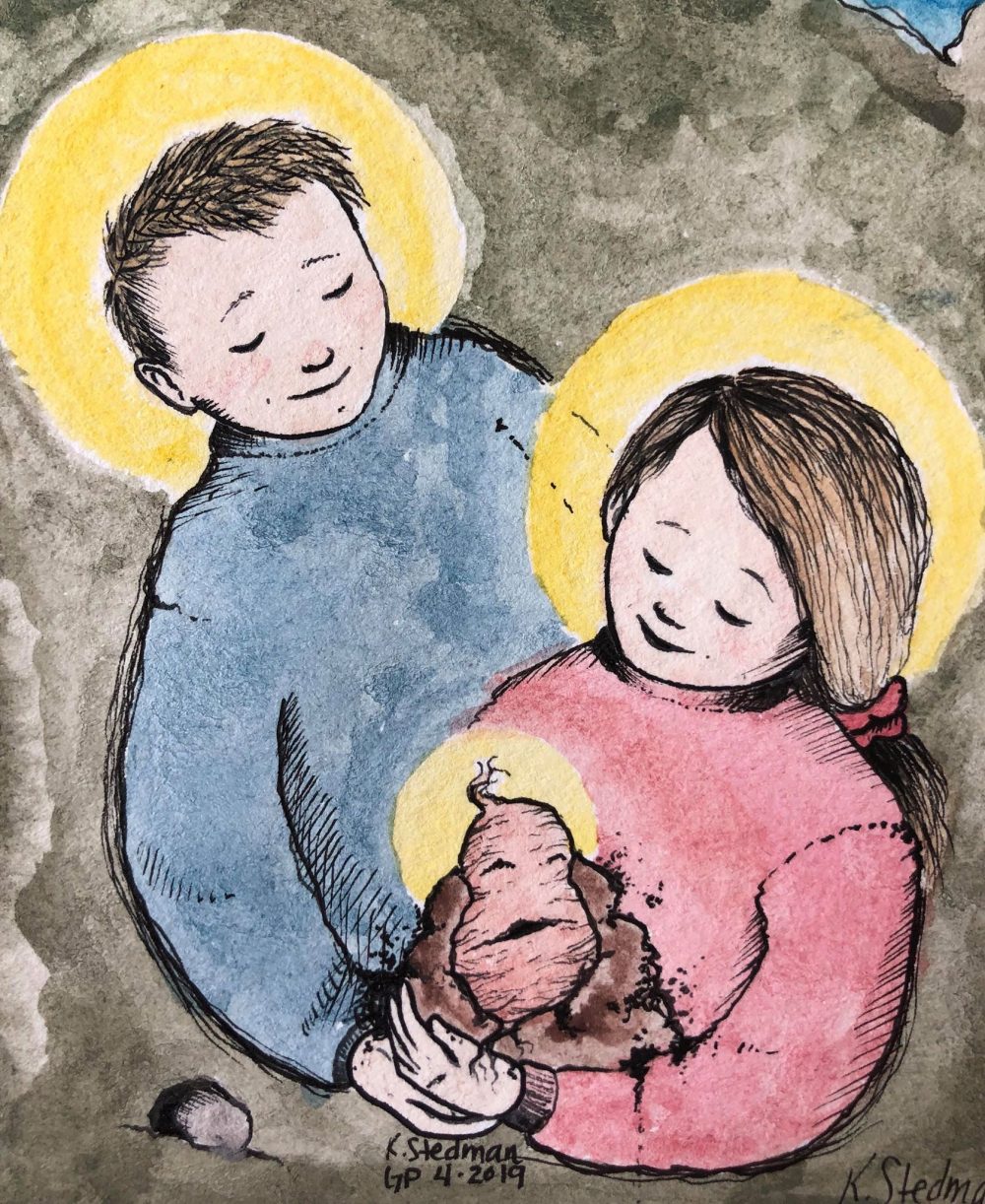 First, he gave me this rock.

We stood on a pile of dirt that had once been a garden that the elementary school kids had used, but now it was just nothing but where bits of trash got stuck. He’d asked me to meet him there after school, saying he had something for me. And then there we were, both of us staring at our feet, and he handed me this rock he said he’d found. He said it was shaped like a heart. I thought it looked more like a kidney bean, but I got what he meant.

Meanwhile my heart beat like a fish suffocating on land before someone smashes its head so it stops flopping. I thought I could maybe hit it with the rock, but I knew the logistics were too messy. I’d have to, like, cut myself open and get through the rib cage and…

He put his lips on mine.

I had never really kissed anyone before and my guess was he hadn’t either, because it was like neither of us knew what to do. Our lips were touching like people in old movies when they couldn’t open their mouths and when we pressed in harder our teeth bumped beneath our closed lips.

I could smell that behind his ears he smelled like salt and vinegar potato chips, and I wanted to lick him there and see if he tasted like he smelled. Instead, I asked him if I could bite him. I guess it seemed too weird to ask if I could lick behind his ear and biting him seemed less so?

But he said “Sure,” like that wasn’t weird at all.

And I bit him, kind of soft, like a puppy does when it’s playing, and he pulled me closer and he took this deep breath like the sound you make when you are home after a long day.

So, I guess we were in love.

And that patch of dirt was ours. We stared at it enough, both of us looking at the ground until we found a way to push through the force field that separated us and collapse into the other.

We’d meet there when we could, and we’d see things like where the garden refused to die. We saw some lettuce putting its head through some clumps of plastic bottle-cap riddled grass like it didn’t care about trash. It was just gonna grow. And every once in a while there would be a root vegetable — a carrot or a potato. We never thought of eating them. They didn’t seem edible, to be honest, they always looked pretty sad.

Once he was kicking some clots of dirt and you could see the top of this root — honestly, I’m not sure what it was. We pulled it out of the ground. It didn’t look like a carrot or a potato or anything else I knew. It was about the size of two fists, and it had this indent in it that made it look like it had a shriveled little face with an open crying mouth.

And he didn’t even laugh. He just kissed it and got dirt on his lips and then he kissed me. We were both better at kissing by then.

And then we buried it again, our hands working together to cover our root-baby with the dirt like a blanket, so he could sleep until he grew big and strong, we said, and then we would dig him up again and each of us would take turns taking care of him.  And we laughed a lot about that.

That was the last time I saw him. I won’t get into the whole thing but there was an issue at school, and he had been kind of homeless for a while with his family and well — he just never showed up again.

And all I had was that rock which looked more and more like a bean every time I looked at it.

And then it rained.

They even cancelled school because of the rain, because things were flooding. Trees were falling over, and there were mudslides.

And I was in my room listening to the thunder and the rain and wondering where he was and if he was dry.

When the rain stopped and I got back to school, that patch of dirt had new trash in it, but the root-baby was gone. I thought of it floating down some storm drain, or washing into some street and getting smashed by tires.

I thought of its mouth open and crying — and I thought how no one would care about it — they wouldn’t even know if it was something they could eat or just trash or that it had ever been something we had kissed and claimed as something we had made in the way that we made love.

And I still have this dream: the water is rising and rising in my room, and our root-baby, which has floated so far and been in so much peril, has finally made its way back to me. It floats right on to my bed, crying with a wail. It sounds so much like a real baby it breaks my heart. I lift up my shirt and put my nipple in the open mouth indent, and the mouth closes and softly suckles. Root-baby drinks my milk. I marvel. How big and strong it will grow! The water rises all around us.

But we don’t drown. We never drown. My bed is a boat, and we float like that for as long as I can stay asleep.