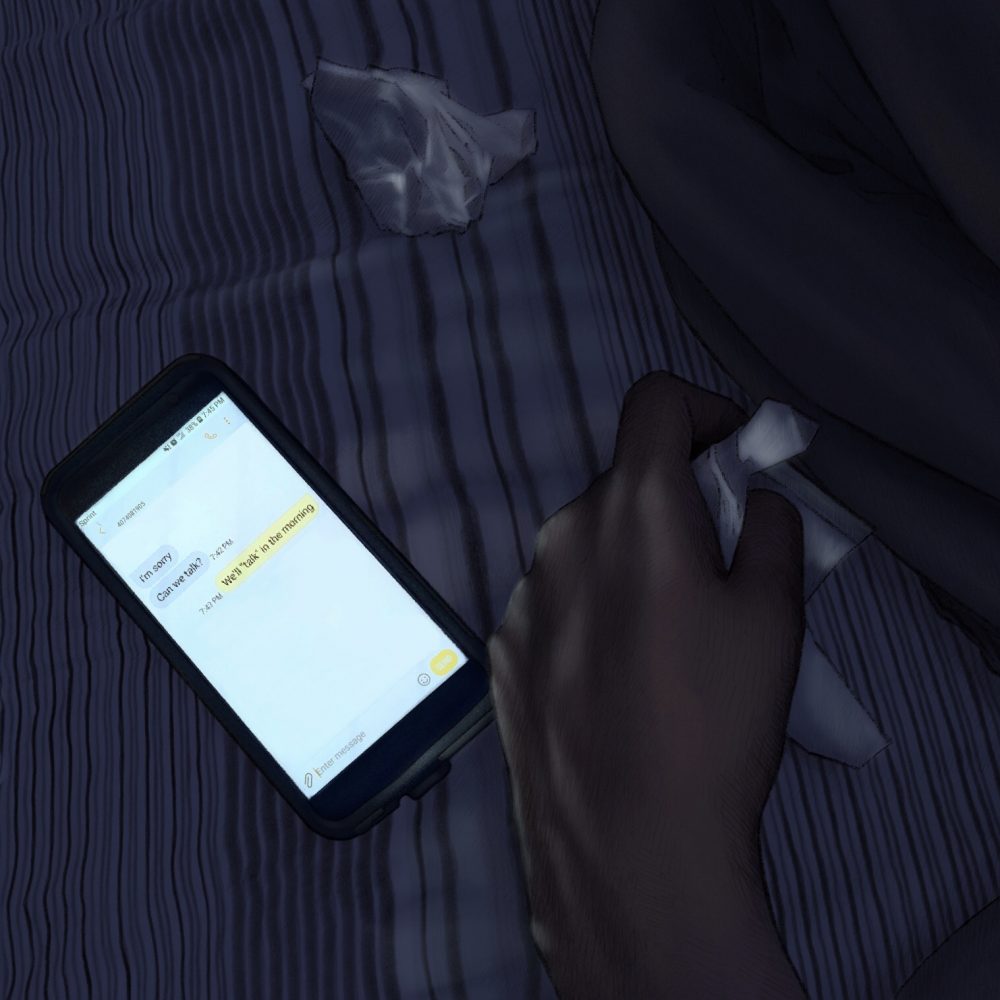 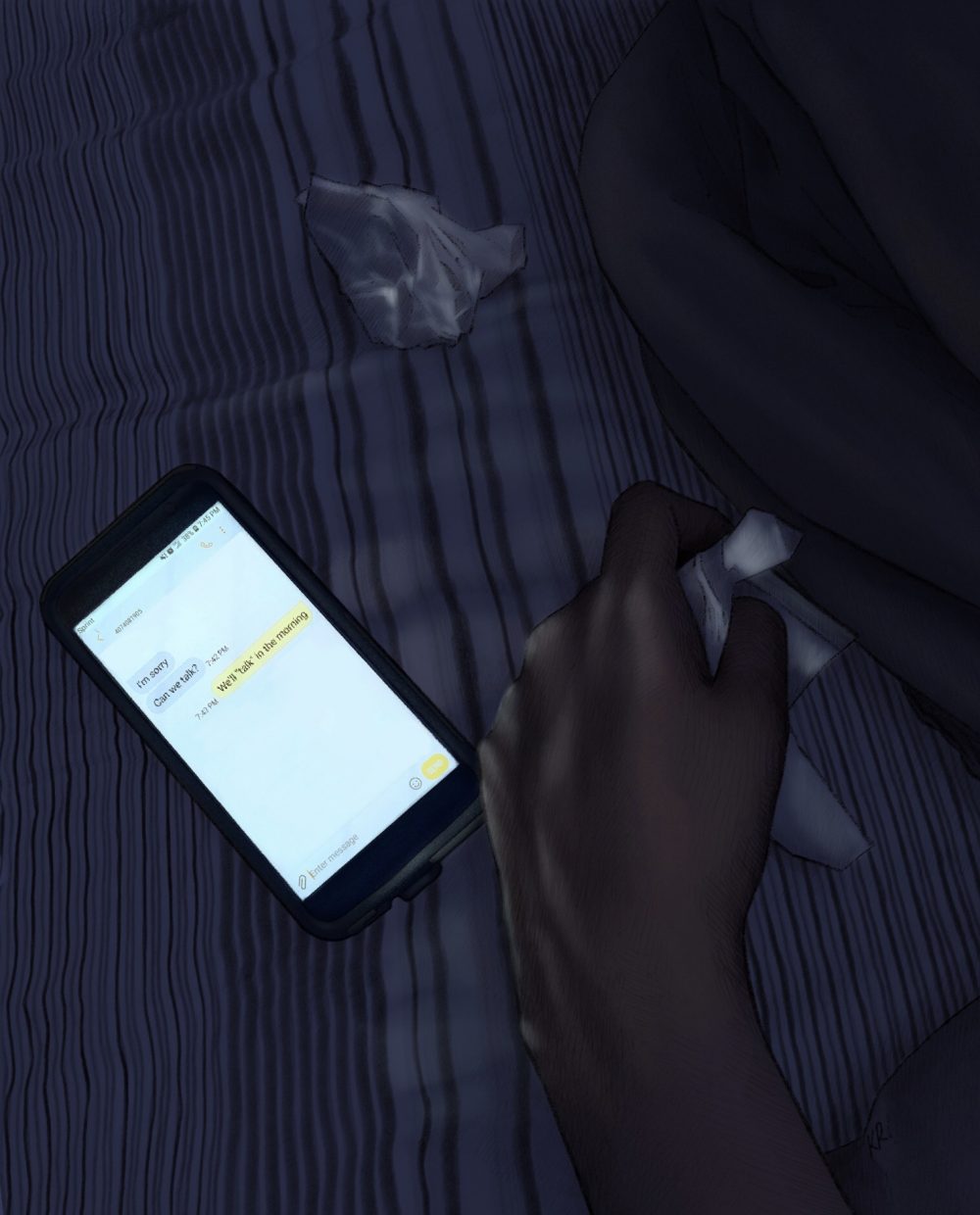 You’re shaking. You’re not cold. It’s an inner chill. A frost on your bones that your blood can’t melt because after it boiled your heart stopped beating. You’re not sure how you’re still alive. You’ve always imagined that reaching this point of emotional annihilation would result in immediate death. Yet, here you are. In a tent, next to the orange glow of a portable propane heater, wrapped in a blue-plaid sleeping bag, lying on a tear-soaked pillow. An overexposed image, like a retinal burn, of the Virgin Mary weeping blood is burnt into your mind’s eye. You encountered her alabaster aura last summer on a backpacking excursion through Bolivia. Where you met him, during a state of emotional oblivion. Fitting. Though that feels like your perpetual state of existence now. Or so it seems on nights like this, which are far too frequent lately.

His broad smile, warm bronze and green hazel eyes, and willingness to carry your pack—and your secrets—when you’d grown weary had won you over. You thought he was learning about you to “hold space.” You thought he was grateful when you did the same and were willing to continue doing so indefinitely. But he’s not a long-distance runner. He’s a sprinter. He was envisioning the finish line before the starting shot ever rang into the stands, and he planned on winning a race you never knew you entered. Too bad he didn’t view you as the prize. Why hadn’t you felt that sooner? You’d sensed him looking for justifications. Reasons to assuage his guilt, albeit brief, for borrowing fifty dollars from you to take another man out. You’d seen the text messages. Snooping, he’d called it. Paranoia, he said. “You’re crazy.” But you knew. You’d felt the initial cold pricks of pre-dawn dew collecting for weeks, eventually forming the thin layer of ice on your intuitive bones that has caused you to violently shake for the past four hours.

He’d begun to forget things. Important things. Things someone who cares remembers. He’d stopped responding to messages, even if just important to you. Attentiveness had mattered to him before. He showed up later every night. He canceled plans. Calls. You held onto past discussions of houses and children and, oh, the sex. Morning sex, makeup sex, intoxicated awkward fondling, and penetration in the middle of the night sex. All of which had woken you fully from a long stretch of restless daymares.

When he wasn’t there, you touched yourself, stirring in the morning with an overwhelming desire to do so while thinking of his stroke. His tongue. His taste. Above and below. Always satiating. He filled you up—the missing warmth in your salted caramel center. Touching his chest, wrapping your arms around his neck, stroking your fingers through the back of his dark hair, pulling his mouth closer to yours; to your pecs—your pulled-taffy, hardened nipples. The scent of his cologne and deodorant on your pillows. Everything lit you. Plugging himself into you was the power source your lust for life had been missing since your high school boyfriend had joined the Air Force and married a boyish-girl he met in Japan. They have three kids now with beautiful hair. You have an Instagram account full of painful memories, and a broken clavicle from the mountain-bike crash on the red-rock trail in Moab last summer. Mr. Bolivia—the son of a farmer from Iowa—had carried you to the ranger station then gone back for your mangled bike. It now stands on a backlit pedestal in the makeshift gallery of your life memories: the embodiment of your current emotional state.

You reach across the tent for a new roll of toilet paper to absorb the fresh layer of goo on your face that’s reinforcing the hours-old encrusted sheathing of snot below. The other roll is littered in soggy, fist-full wads, like golf-ball sized hail had rained down inside the tent. Shadows of the looming trees overhead peer through the thin, yellow, nylon shell of the tiny shelter. Sentinels. The wind scrapes branches against the sides of the tent, like fingers spelling out the dangers of a cluttered mind and shadowed heart overgrown with underbrush. The zipper jangles. Is someone there? Was that a flutter in your chest? Still not possible.

You’re in the Colorado woods somewhere near Tom Cruise’s Telluride ranch. You’d fanboy-camped here a dozen times with your friends in high school, hoping to catch a glimpse of him on horseback. Climbing into the trees, you’d used your yoga mat strap to free loose branches overhead. You felt alive when they came crashing down toward you. All the while hoping if one ever knocked you out that Tom would find your fragile, unconscious body and breathe life back into you. Coming to, you never thought of exactly what, but you’d have said something witty. Surely. Maybe if you die in this tent he’ll be the one to carry you out this time. Maybe he’ll avenge the porcelain boy’s death when he discovers the cause of it was a broken heart. Had you read an article about him selling the ranch, though? Driven out by his own broken heart. The only aspects of the human experience that every social class share: heartache and longing. But what do you know? You couldn’t even stop yourself from falling for Iceman’s cocksure demeanor.

Your phone chimes. It’s a message from Mr. Bolivia. He’s sorry. He wants to talk.

All you want is to be bent over and rocked with a rhythmic glide until all the muddled thoughts and hurt have left your mind—nothing escaping your lips but moans. It’s the only time you both speak the same language.

You fall asleep watching the vein in your wrist pulse, grateful you hadn’t sliced into it the way the Bolivians had Mary while trying to lay bare the source of her anguish.