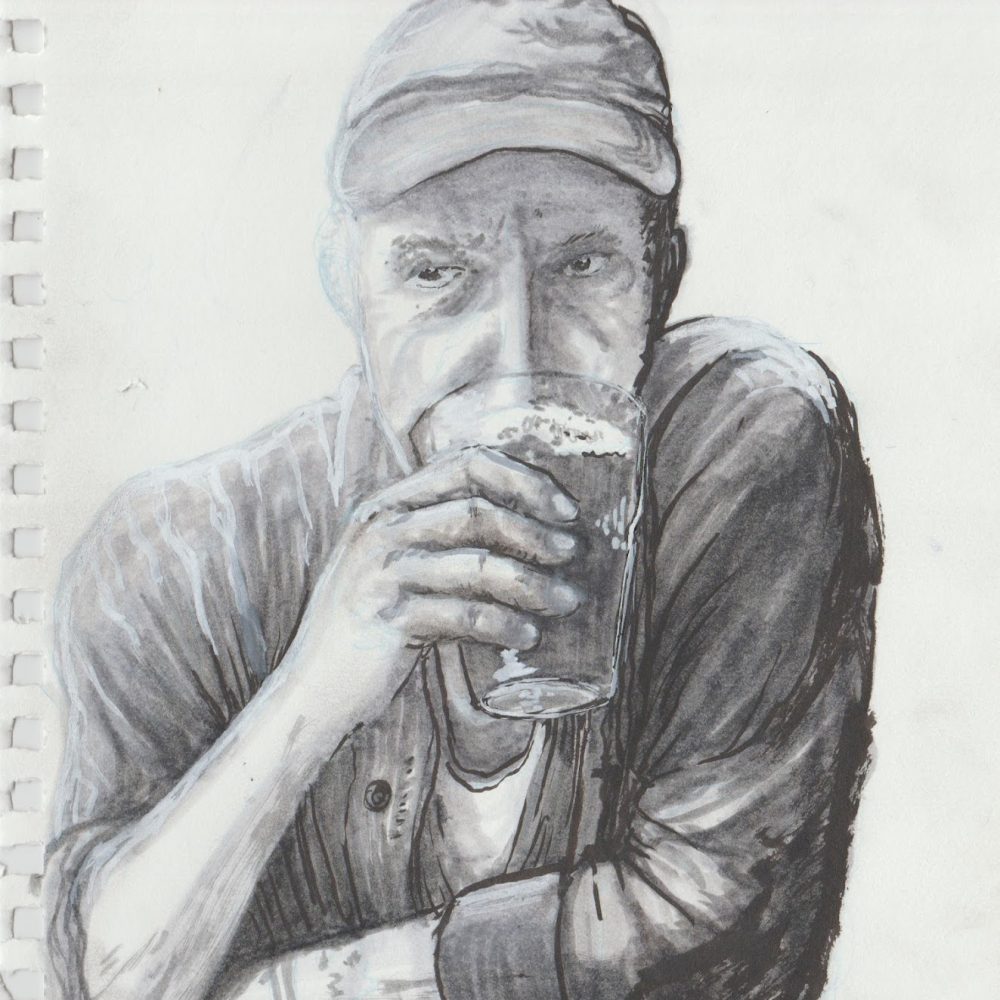 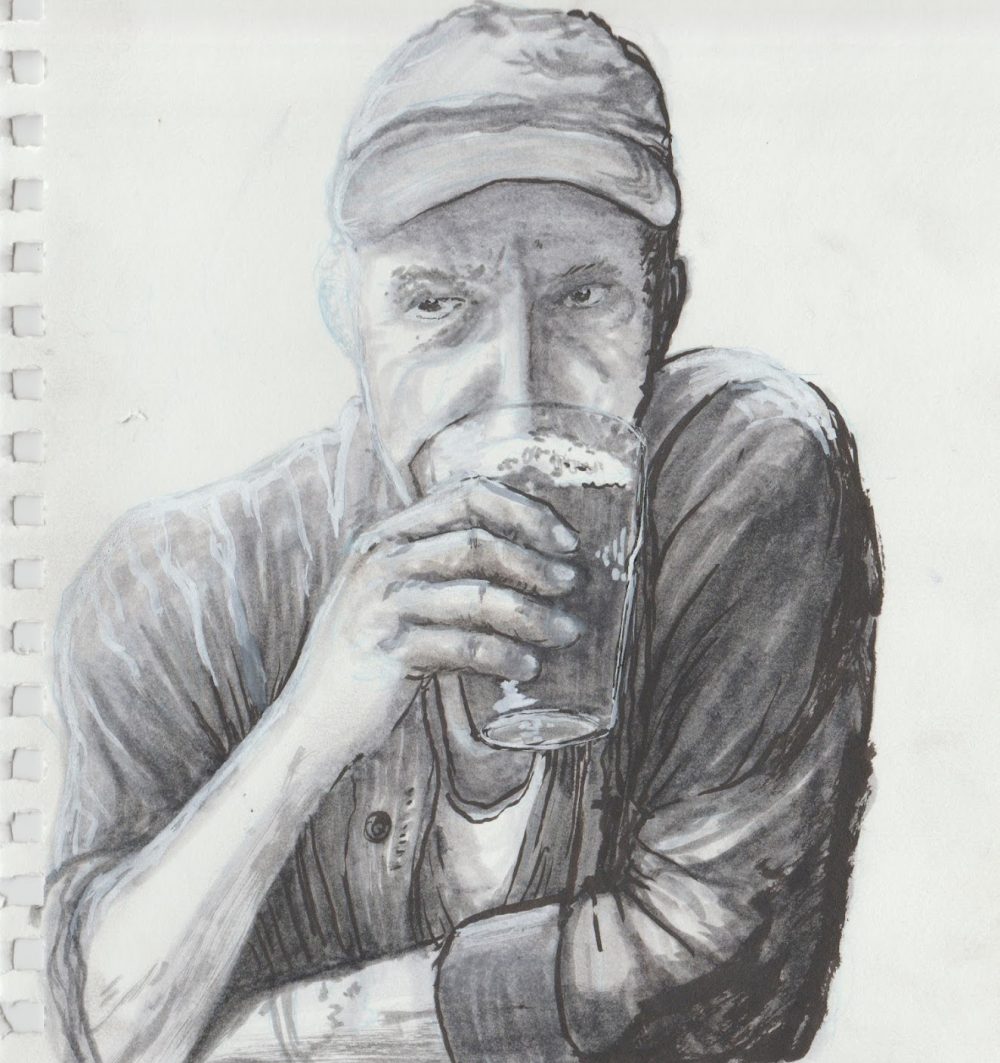 “These kids today, they just don’t care about quality.” Sid took a pull at his beer.

“Tell me about it,” Ray said. “I just got undercut by some noob by 50%. I was actually in Lisbon, five minutes from the job when my dispatcher called me home. Some snot-nose college grad had finished the job for half my rate. My prices are already low, and this fuck’s doing it for half? How the hell am I supposed to live on that? I got a family!”

“Kids I can deal with,” said Martin. “You just got to do better work on the tough jobs. They’re just good for the grunt work. They don’t have our expertise. We’re artisans and craftsmen; they’re ditch diggers. It takes real skill to pull off some of my projects. They’re real works of art. Meanwhile these kids bust into a room, and spray and pray all over everything, hoping something takes.”

Ray looked up from their corner table. It was after lunch, so the bar was fairly empty, except for a couple regulars who didn’t seem to have jobs to go to.

“Clients just don’t appreciate craftsmanship,” said Ray. “I’ve been honing my craft longer than some of these kids have been alive, but the fucking clients are all about price, price, price.”

“Yeah, but it’s not the college kids I’m worried about,” said Martin. “In ten years, they’re going to be in the same boat we are, thanks to these damn AI machines. Did you read the Guardian last week?”

“The fuck you read the Guardian for?” said Sid. “You think you’re better than us?”

Martin thunked his beer on the table. “What? It’s a fucking British newspaper. How does that make me better than you?”

“Jesus, are we doing this again? Last week, you got shitty because I wanted to eat Chinese food. Two weeks ago, it was because I got a Lyft instead of a cab.”

Sid stabbed the table with his finger. “There is nothing wrong with hamburgers or protecting the American worker!”

“My Lyft driver was American. Every cabbie I meet in this city is from somewhere else.”

“Alright, alright. Jesus, settle down!” said Ray. “Let’s get some shots and talk about something else.”

Ray signaled their waitress. “Four shots of good old American bourbon for me and my redneck friend. And whatever this guy’s having.”

The waitress flounced off, and Ray watched her go. He put his coat on and mumbled something about being colder inside than out.

“Oh yeah?” said Sid. “None of your fancy rums or whatever shit you drink?”

“My dad worked at Jim Beam for 37 years. I like bourbon,” said Martin. He put his coat on and jerked his chin at Sid to do the same.

“So how’d you end up doing this?” Sid asked.

“Army. I was a pretty good sniper, so I did that for a few years. Once I got out, I wasn’t good at much else.”

“So what did this Guardian article say that got you all bothered?” asked Ray.

“This Israeli professor said billions of people could be replaced by intelligent robots in the future,” said Martin. “Says it’s the ‘rise of the useless class.’ He says AI is getting smarter, and more humans will be pushed out of a job. And 20 years after college, our skills won’t be relevant anymore, so billions of us will be completely useless because our jobs will be done by robots.”

“Those fucking robots don’t get paid either,” said Ray. “Just send one into the room and boom! Job’s done. Don’t even need an extraction.”

“You know, maybe Denmark’s already onto something. They already have a universal basic income for citizens displaced in the labor market. If people lose their jobs to robots and computers, how will they survive?”

Sid plunked his beer on the table. “That’s socialist bullshit,” he said. “It totally undermines our country’s principles. If people can work, they should work, even if if it’s not a cushy office job. A universal basic income only puts a floor on how poor—”

Sid looked up, the other two followed his gaze. Their waitress approached with a tray of shot glasses in one hand, the other behind her back. The three stood quickly, knocking their chairs over.

“Gentlemen, compliments of your former emply—” Her head snapped back as a red hole dotted her forehead, two more in her chest. She fell to the floor, the drinks shattered, and a Heckler & Koch MP7 clattered next to her body. The regulars ran out of the bar.

“Jesus, there go our drinks,” said Sid, returning his pistol to his pocket.

“What’d I tell you?” said Martin. “Spray and pray. Who the fuck brings an MP7 to a close-in fight?”

“Damn shame,” said Ray. “She had some promise. That’s the kid that took my Lisbon job. A little sloppy, but she got it done. Couple more years, she could have started booking bigger gigs.”

“Well, hell. This means the NSA’s done with us,” said Sid. “You think maybe we ought to retire?”

Martin ran his fingers through his hair. “Possibly. I’ve still got a couple jobs the Belgians need done, and then I’m heading somewhere warm for the winter. Then I’ll decide what’s next.”

Ray said, “Tina’s father-in-law’s been asking me to join him at the agency. I might look into that.”

“No, insurance,” said Ray. “He sells insurance in Portland, and I like the city.”

“Well, we’d better go before the cops get here. You guys wipe everything down?” asked Martin.

“Irish place?” asked Martin. “You too good to drink at American bars?”

“Fuck you.” Sid laughed. “I like their Scotch eggs.”