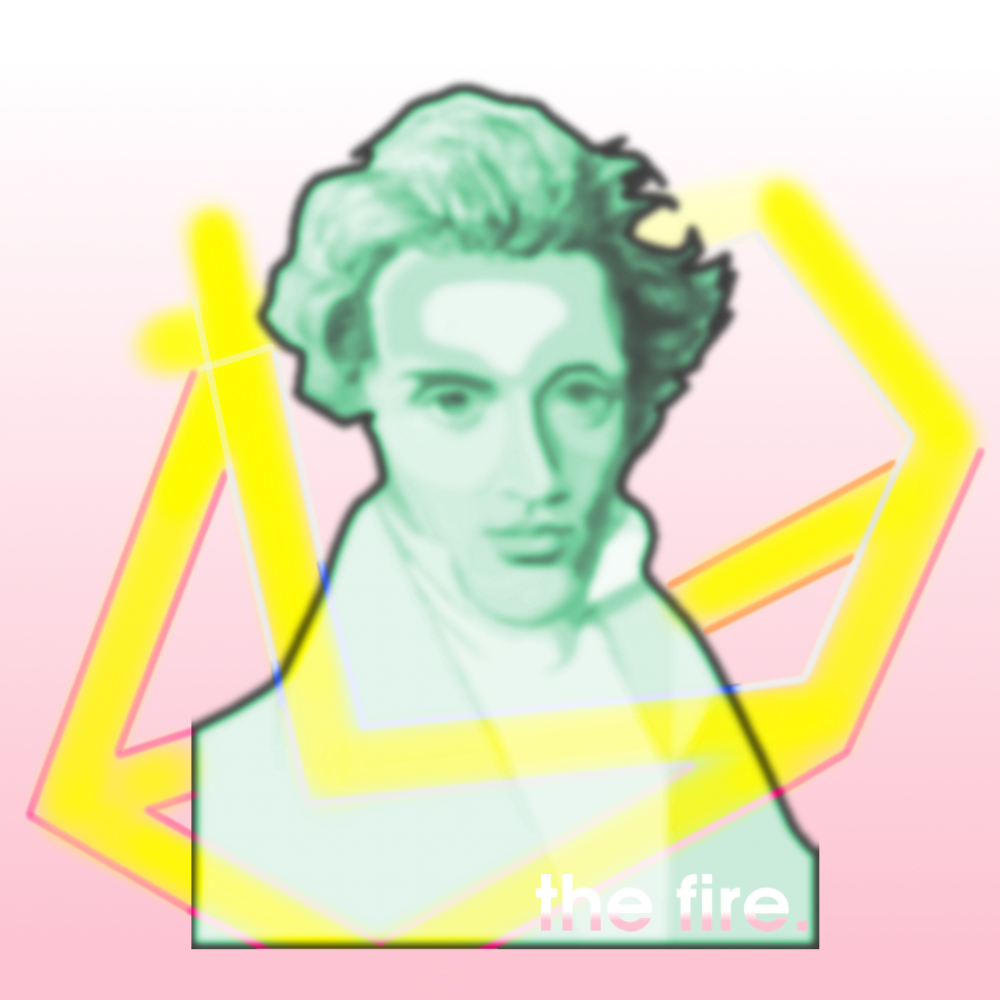 “It happened that a fire broke out backstage at a theater. The clown came out to inform the public. They thought it was just a jest and applauded. He repeated his warning, they shouted even louder. So I think the world will come to an end amid general applause from all the wits, who believe that it is a joke.” –Søren Kierkegaard, Either/Or

STUDIO ANCHOR: We interrupt your regularly scheduled programming with breaking news. A fire has broken out at the K Theater on Orange Avenue. Tripp Straggler is live in downtown Orlando reporting for News 9.

TRIPP: I’m here outside the K Theater, where firefighters are in the process of putting out a fire that was set by someone at some point.

STUDIO: That’s all we know?

TRIPP: Not much is known, but we are patiently awaiting details.

NEWS CHOPPER CAMERAMAN: Just as I will patiently hover over this blaze until more details emerge. What I might say, in the meantime, if you’re willing to accept the opinion of a humble cameraman, is that we’re observing a kind of parable unfolding.

STUDIO: What does the theater director have to say? Perhaps you could ask him how it feels to watch his life’s work go up in smoke?

TRIPP: I’ve just confirmed that the theater director is dead.

STUDIO: What a tragedy! And also what an honor. To be the network that breaks such a tragedy. If you’re just tuning in, we’re live on the scene at the K Theater where a fire still blazes, killing one––we assume several are injured. What do you know about the theater patrons?

STUDIO: Terrible! What else?

TRIPP: The fire is hot. About as hot as you’d expect fire to be. The flames are very large.

STUDIO: We can see that, Tripp. We’ve got Steve in the chopper doing a hell of a job! Keep that camera rolling, buddy!

CHOPPER STEVE: I find this particular assignment to be rather unpleasant. In fact, even at this early stage of coverage, I’m confident in stating that this is one of the worst days of my professional life. But thank you for the compliment.

STUDIO: Anything else you’ve found out, Tripp?

TRIPP: I’m getting word that a clown first spotted the fire while walking through an alley behind the theater. The clown apparently ran through the back door and jumped on stage to warn the theater patrons.

STUDIO: Sounds like a real hero! Do you think he’ll run for office? How do you think this fire will affect the clown’s political future?

STUDIO: And yet we’re seeing his poll numbers rise as we speak, right here in real time.

TRIPP: I can’t speak to those numbers from here on the scene.

CHOPPER STEVE: Frankly, I would be more interested in knowing how the theater patrons reacted to the clown’s warning. Something about this story strikes me as upsettingly familiar.

EXPERT 1: I think it’s quite clear we’re dealing with a parable. For instance––

EXPERT 2: This is not a parable, not in the least. It’s a parabola, unfolding right before our eyes. If you look at the––

STUDIO: I have to cut you both off for a moment as we turn back to the scene for updates on this ongoing tragedy. We simply cannot risk missing the next break in the story. What’s going on out there, Tripp?

TRIPP: The theater is still on fire.

TRIPP: I’m afraid not. I’m told the police are currently engaged in an active shooter scenario that has cropped up outside the theater.

STUDIO: And the firefighters?

TRIPP: A few of them remain steadfastly behind their hoses. Others have refused to fight the fire for religious reasons. The majority have perished under the barrage of the active shooter’s bullets.

CHOPPER STEVE: I hate to beat a dead horse, gentlemen, but could we look into the reaction of the theater patrons? What did they do when the clown showed up? You’d think they would have heeded the clown’s warning and run out of the theater, and yet, according to Tripp, they are dead––presumably burned alive.

TRIPP: Some people say the theater patrons were laughing as they died. Laughing at the clown, some people say.

STUDIO: What people are those?

TRIPP: I did not bother to ask.

STUDIO: If you’re just tuning in, we’re live at the K Theater where a fire and active shooter scenario have claimed countless innocent lives. Tripp, do we know if these two tragedies are related?

TRIPP: Anything is possible in Florida.

STUDIO: True. So very true. Let’s check in with the experts.

EXPERT 1: All of my research suggests these events are related.

EXPERT 2: Every fiber of my being indicates the opposite.

STUDIO: Clearly a very interesting debate, with points being made on both sides.

CHOPPER STEVE: If I could just say––

STUDIO: Not now, Steve. Hold steady on those flames. We’ve got a job to do here.

TRIPP: I have just received confirmation that a bullet has severed my femoral artery.

STUDIO: Goodness gracious! If you’re just tuning in, we’re live outside the K Theater, where an audience of theatergoers has laughed in the face of their own fiery demise and an active shooter has injured our star reporter. Tripp, is there any word on who might have set this fire?

TRIPP: Mankind stole fire from the gods. We have lost respect for it.

TRIPP: Its symbolic ambivalence confounds us. We cannot help but stare at the flames, which will both consume and cleanse us.

TRIPP: As you can see, there is a lot of blood.

STUDIO: Yes, Tripp, we can see. The whole world can see. And they saw it first on News 9.