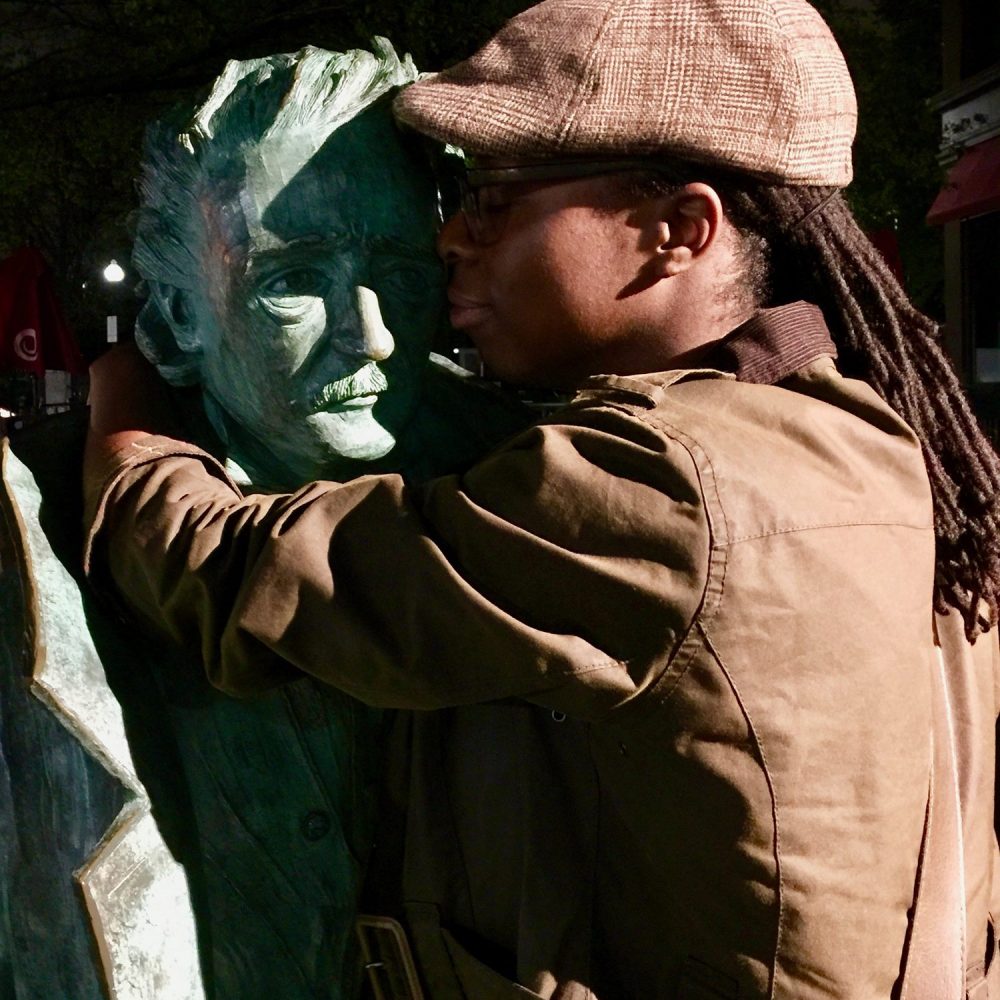 The JetBlue terminal at Logan Airport

You are hung over and maudlin. Sit heavily in the gate area of the delayed plane from which you just debarked and cry for having wrecked it all on the very last night of the trip. Try it! People will mostly leave you alone, intuiting that you’re despairing of what you’ve left behind, or that you’re broken up about having missed your connection. Ha-ha, that’s not all that’s broken up; that ain’t the only connection you’ll miss! Kudos if the person who taps your shoulder, whom you think is going to offer you a hanky, is just telling you your shirt’s on backwards. Or that you should sob a little more quietly because they’re making announcements and she’s traveling standby. No kudos if you turn to her and say, through your tears, “Did you know that the Massachusetts Port Authority razed an Olmstead-built park, once part of the famed Emerald Necklace, in order to expand this very airport in the 1960’s? And that the blue-collar neighborhoods that once enjoyed oceanfront Wood Island Park have been wicked salty about it ever since?”

No kudos to you because nobody cares about the past anymore. And why should they?! It’s only the place where oaths were sworn in soft, sleepy voices.

Note: This is also a great location to let those twin streams flow even if you aren’t traveling that day, but remember that you’ll be relegated to the ticketing areas and baggage claims.

The bar at the top of the Prudential Tower

Kind of cry it’s good for: The Fancy Dab of the Tear Duct With a Starched Dinner Napkin.

This is the type of cry only a well-chewed Xanax can grant you, at least at this stage. Cry it into your $25 berry gimlet while Capistrano plays smooth jazz in the corner and tourists at the tables ‘round the bar where you’re seated congratulate themselves on having found this gem “hidden” in the clouds. You shouldn’t be mixing that drug and this drink but do you really care about yourself? Tell your bartender all about it. Say your name is Lagrima or Tristesse. His curiosity will seem genuine—he’ll say he’s a photography student and that you look so mysterious with that tear gently gliding the length of your cheek, pulling a slick of black mascara with it, that he wants to shoot you sometime. Resist the gallows joke and smile at him—be reminded that you’ve always attracted people who love the surface of a mess. The next five drinks are on the house. Briefly awaken from your blackout with a microphone in your hand and Capistrano backing a surprisingly tight rendition of your song with muted enthusiasm. As part of the patter, which you’ll deliver between quavering breaths, you’ll inform the dining public that Oliver Wendell Holmes once referred to the Boston Statehouse as “The Hub of the Solar System,” which morphed, over time, to “The Hub of the Universe,” which is why, friends, this particular spot is called the Top of the Hub. People will tip you as you help close down the bar, which will annoy the wait staff. As the bartender asks for your address for the Lyft and you try with your last, dying brain cell to remember it, let the view through the glass walls remind you of how small this city is, how small you are, how miniscule your broken heart.

Longwood Mall, which is not a commercial center but a stand of historic beech trees

Kind of cry it’s good for: The Cry of a Wretch Who Needs to Stop Drinking Before She Alienates Everyone Who’s Ever Loved Her.

Of all the locales on this list, a sturdy branch a few feet off the ground in one of Brookline’s magnificent beech trees, imported from England by David Sears, prominent 19th-century Boston philanthropist, is by far the best place to have an ugly cry. Bring your hunched shoulders, your reddened, swollen eyes, and your long strings of mucus swinging from the tip of your nose as you wail into your lap. Old-Ass Tree won’t judge. This cry is cathartic as can be, surrounded as you are by the limbs of a 200-year-old being who, by the end of the night you spend vodka-blubbing into its ancient bark, will have you convinced it heard and there-there’d your every curse against that former soul mate who’s racking up your missed calls like some sort of high score in an arcade.

Kind of cry it’s good for: The One That Takes Your Body by Force.

Maybe, after days of holding it together, you’ll suddenly remember the words to “Yesterday” and lose it. (Beatles version? Boyz II Men version? Your pulpy heart doesn’t care.) Perhaps it’ll be the fact that you are on a bus whose much more famous namesake brought a younger, depressed America westward in search of fertile ground, but now lives on only in a song bastardized by John Mayer and in the name of a K-Mart clothing brand. It could be that the crush of rush hour’s crowded bodies is throwing your loneliness into sharp relief. Whatever the reason, you’re crying again. The public transit cry, unlike the airport cry, won’t reliably go unnoted. Be prepared to answer the Russian babushka or the 3-year-old looking up at you between perfect Afro puffs when they ask you what’s wrong. Your answer should be a lie. “I was just thinking about how the wheels on the bus go round and round no matter how heavy their burden, forever and ever, as long as we sing their song,” is not, for example, a good answer to give the child. And “I’ve just realized I’m never going to take another risk with my heart,” would not be a good answer for that poor Russian grandmother bogged down by bags from Trader Joe’s.

Kind of cry it’s good for: The First Sober Cry You’ve Been Able to Muster Since That Night.

You are crying because Edgar Allen Poe was one of the first Americans to try to make a living as a writer and he wrote in hopeless poverty for most of his short life. He sold “The Raven,” which was an instant success, to The Evening Mirror (New York) for $9. You are crying into the bronze fabric of Poe’s trench coat because your issues with mental health are no longer cute—the weight-loss sets your wrinkles and makes you look tired; your mania, once the life of the party, keeps people from inviting you to parties anymore. You are crying because you are human, because you are modern, because you’ve learned again that it is possible for another sad modern human to look you in the eye and tell you you’re not worth the trouble. Your estranged father did that first and boy did he do it best! Not that you view every potential romance as a replacement for paternal love…that would be perverse! You are crying because Poe, like you, like Dostoevsky’s Yakov Petrovich Golyadkin, had a double who showed up and wrecked everything. Poor Poe! He never recovered from being born or from being orphaned or from his wife’s death from consumption! One estimate says that 1/3 of the global population is infected with TB! But, but…the vaccine! It’s a very sad world. Some misguided idiots elected the universe’s most hideous man to the highest office in the land, lest you forget. Crying in the here and now is adaptive, it is hygienic, it is healthy. If anyone tells you not to cry, give them something to cry about. Cry in an ecstatic, chaotic, unmanageable, inconsolable way, in public, in a tree, at a bar, on a bus, on a statue’s still shoulder. Cry because, like Sylvia Plath, your tears are brimming and sloshing in you “like water in a glass that is unsteady and too full.” Maybe in the morning you’ll wake up with the need to cry only once all day, in the comfort of your bathroom. Maybe soon after that, the sea within you will remain perfectly calm for weeks at a time.

Kind of cry it’s good for: The Single Quiet Tear Terminating at the Corner of Your Smile.

On a stroll through the Public Gardens one summer day, you’ll make the whimsical decision to get on a swan boat and enjoy the green lagoon waters among touring families. As you pay your fare and board, remember one reason you live in this city you can’t afford to live in: these were the first public botanical gardens in the country. Good job, Athens of America. Reflect that you’ve experienced a fair share of your own firsts here in the Hub. Someone will have left a copy of Boston Magazine on the boat bench. As you alternate between making faces at the infant babbling over its mother’s shoulder and leafing through the magazine, a surprising, familiar face will look up at you from a glossy page. It will be you, though the caption will say Lagrima Crying. It will be an obsolete version of you, misnamed and not yet done becoming, as captured by the bartender from that bar in the sky, the image a product of the shoot he set up a year ago, which you dispassionately agreed to because it was the least you could do after all those free gimlets. He is using this photo of you at your most pathetic to advertise his gallery opening. Tearful women sell. Good for him. Look away from the embarrassingly earnest sorrow in the eyes of your past self, toward the horizon. Start to well up when you see that two real-life, courting swans have come together in the middle of the lagoon, their arched necks expressing a heart. Smile, though, when you remember that those violent jerks of the animal kingdom are so ugly as babies that even ducks reject them.

Maria Pinto's work has appeared or will appear in FriGG, Necessary Fiction, Great Jones Street, and The Butter, among others. She was awarded the Mastheads Residency and was an Ivan Gold Fellow at the Writers' Room of Boston, in the city where she reads for FLAPPERHOUSE and does karaoke. Her debut novel is in search of a home. She's working on the next.