Natasha Samreny is a writer and comedian currently based in Central Florida. She got her storytelling start in radio, and trained in comedy at The Second City in Chicago. Samreny's performed improv, sketch and stand-up comedy around the world, including Edinburgh and Camden's fringe festivals. As a playwright fellow with Chicago's Three Brothers Theatre, she co-wrote A Relative Silence for the 2015 Waukegan Theatre Festival. She currently features as a comedian and teaches Comedic Storytelling at the Florida Studio Theatre. 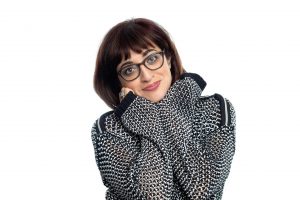 Never have I ever Enjoyed mini golf That’s what it says on my Hinge dating profile. That’s what it said on my Hinge profile. The one I made around the time this epidemic slipped into a pandemic into #QuarantineAndChill #StayHomeStaySafe, and #PandemicPissingContestAnxietyDepressionFaceButMakeItFashion. I have nothing against dating apps. They’re fun little toys that can help […]